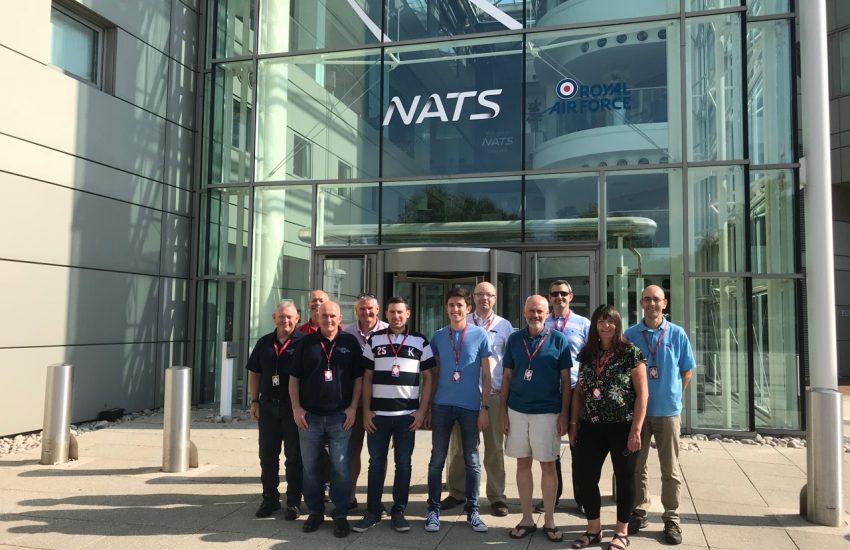 John, one of the more proactive members of Bristol Aero Club, organised a visit to D&D (Distress and Diversion not dungeons and dragons) at NATS (National Air Traffic Services) in their Swanwick centre near Southampton. These are the controllers who answer the distress frequency 121.5 which is available to all aircraft throughout the UK airspace 24 hours a day, 7 days a week.

The centre also handles all commercial traffic in the south of England, housed in quite a large and impressive building.

As you might expect, security is tight. All visitors details were pre-arranged and we had to present photo ID when checking in at the gatehouse for our passes. We were processed through Airport style security scanners at the entrance before being escorted to a lecture theatre for a briefing. 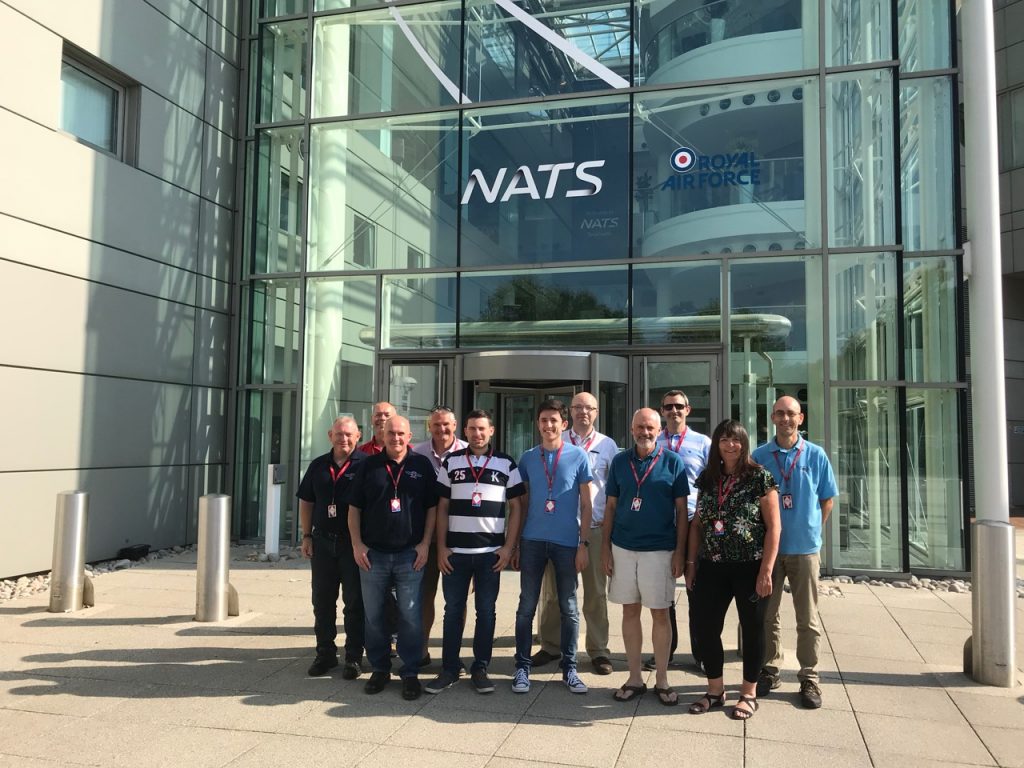 An overview of NATS

We were given an interesting overview of NATS activities. Ownership is approximately:

It has two operating divisions

Total annual revenue is £913 million of which about a third is reinvested in new technology.

The building itself is very modern, clean and bright. Some of the new investment is quite sophisticated while other aspects seems more like a catch-up. Electronic flight strips have only this year been fully introduced into the Terminal Control operation. They are building a remote tower facility at London City due for completion in 2020. They have invested £51 million in Aireon, which will provide worldwide aircraft position reporting including outside radar coverage.

Over 2.5 million flights are handled annually with no risk-bearing Airprox recorded – a very high safety record indeed. They are very keen (and proud) of their animations of air traffic throughout the day, one of over 200 videos available on their YouTube channel.

Two themes came out strongly from the presentation:

The CAA has just published its Draft Airspace Modernisation (CAP 1690) document which explain how they plan to modernise, using satellite navigation (rather than older ground aids) to fly more constrained tracks, introducing free airspace and direct routing (rather than using airways), and communicating with commercial aircraft by datalink (rather than by voice).

Distress and Diversion has its own dedicated room where we met the two controllers on duty. The service is provided by the Royal Air Force using RAF staff, within the NATS building.

One was an older and very experienced controller who had served his time in civil air traffic including both area and terminal control. I recall that the second younger controller had only served in the RAF. Both were clearly extremely competent and would provide the professional calm response you’d want if you were in a difficult situation. 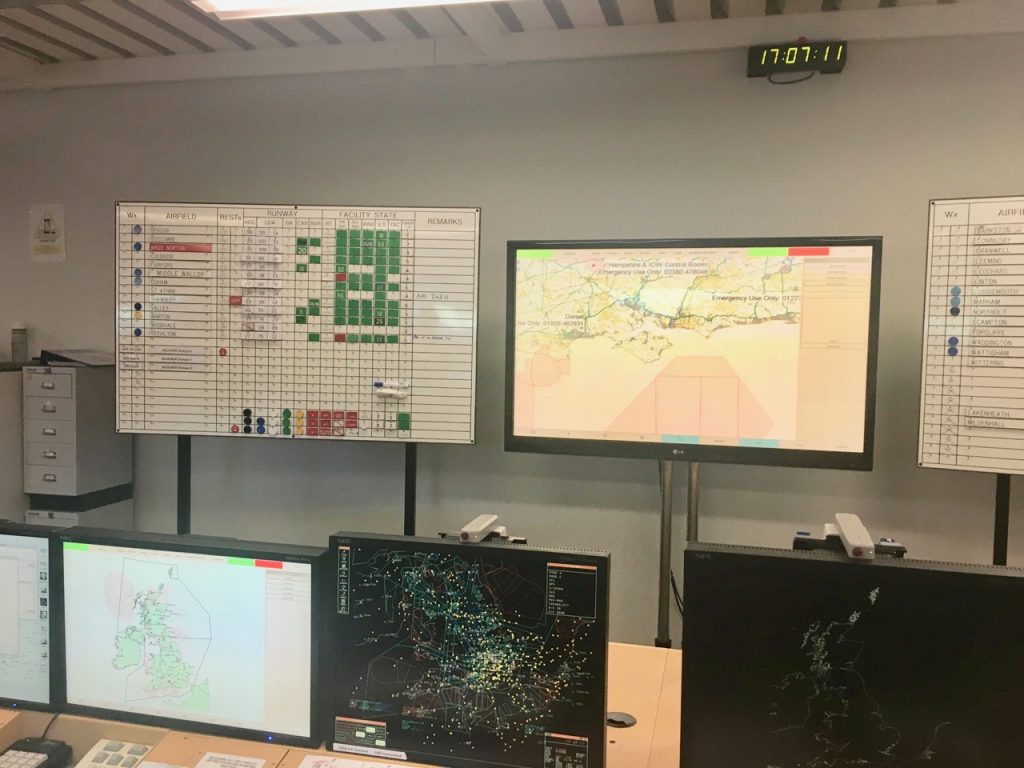 There were several information boards along the wall in front of the control desk, with information about the status of all military airfields. Phone calls came in to update the status as airfields closed operations for the day, and the changes were manually recorded. Electronic screens displayed maps in a variety of formats with overlays. 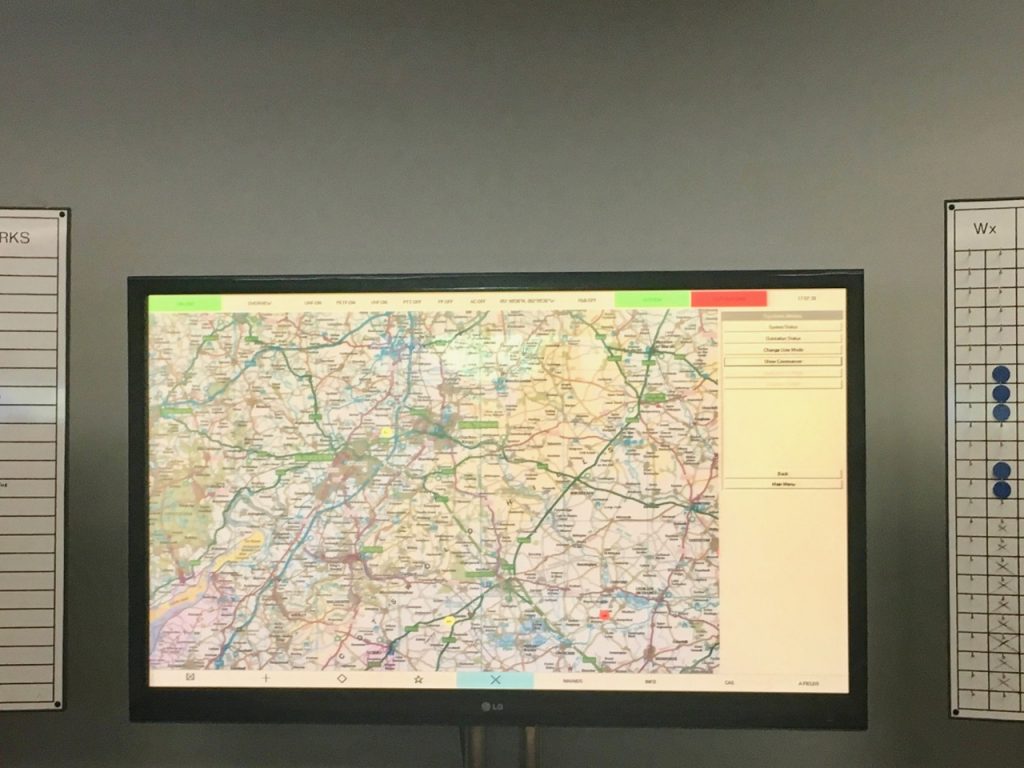 The UK is unusual in that it has over 30 automatic direction finder receivers dotted about the country. As soon as any transmission is made on the distress frequency, direction lines appear on the screen triangulating the source (and stay there for a while after the transmission has stopped). Even a brief transmission can be tracked and traced.

London Centre’s area of coverage is the entire UK Flight Information Region. There is no longer a separate team handling Scotland.

There are three frequencies monitored here:

We heard a few transmissions on 121.5 while we were there. Not a real emergency but an airline pilot talking on the wrong frequency by mistake. It’s common practice for airliners to be monitoring that frequency (on box 2), so everybody hears the mistake. Another pilot would then fairly quickly point out the mistake (“you’re talking on guard!”) and the frequency goes silent again. This did trigger the tracing mechanism and instantly showed the position of the transmission.

We asked quite a few questions and were shown the capabilities at their disposal. Where appropriate, they could alert the RAF who could launch fighters or helicopters to intercept rogue aircraft not responding to ATC instructions. Alternatively, they could scramble a rescue helicopter in case of a ditching. At the other end of the scale, they are very happy to conduct Practice-Pans with student (or current) private pilots. No problem if your R/T isn’t perfect, but preferably use the script in the leaflet below.

I suspect that much of the time it gets pretty quiet there, especially at night, so they do encourage any pilot to make practice pan calls to keep them on their toes – just listen out first in case there is a real emergency in progress. I try to ensure that all my students have made a practice call, and they are often surprised as how quickly and accurately their position is given. 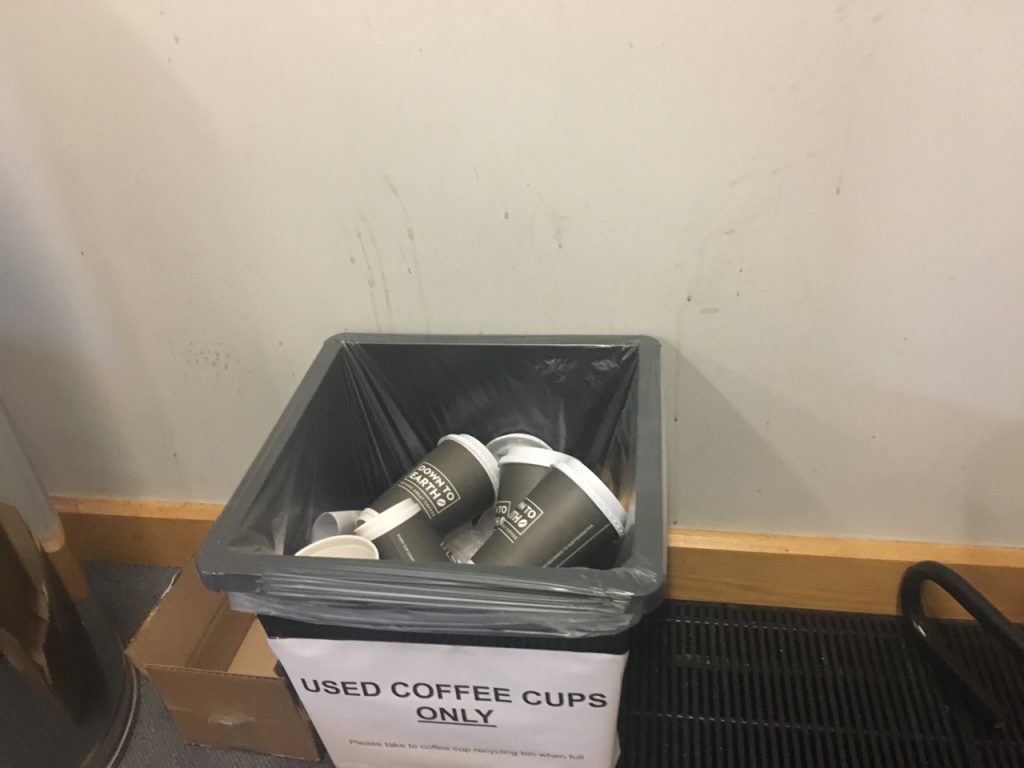 They do seem to get through a fair bit of coffee

We were escorted around the main control room, where specialists direct individual aircraft while others take a view of the overall situation and can impose limits/constraints where required (ie delay take-offs/landings). Previously weather information was sourced from the Met Office in Exeter, now they have their own meteorologists in the room – such as predicting when and how quickly a rainstorm will pass over the runway and how it will affect operations makes a further improvement to availability capacity.

We saw some additional desk positions along the side, used for training. There was a specific small screen showing the stack of aircraft circling in the hold, each with their expected approach time. The approach controllers pull off each one at a time from the bottom of the stack and direct it into the tidy line of landing traffic at each airport. 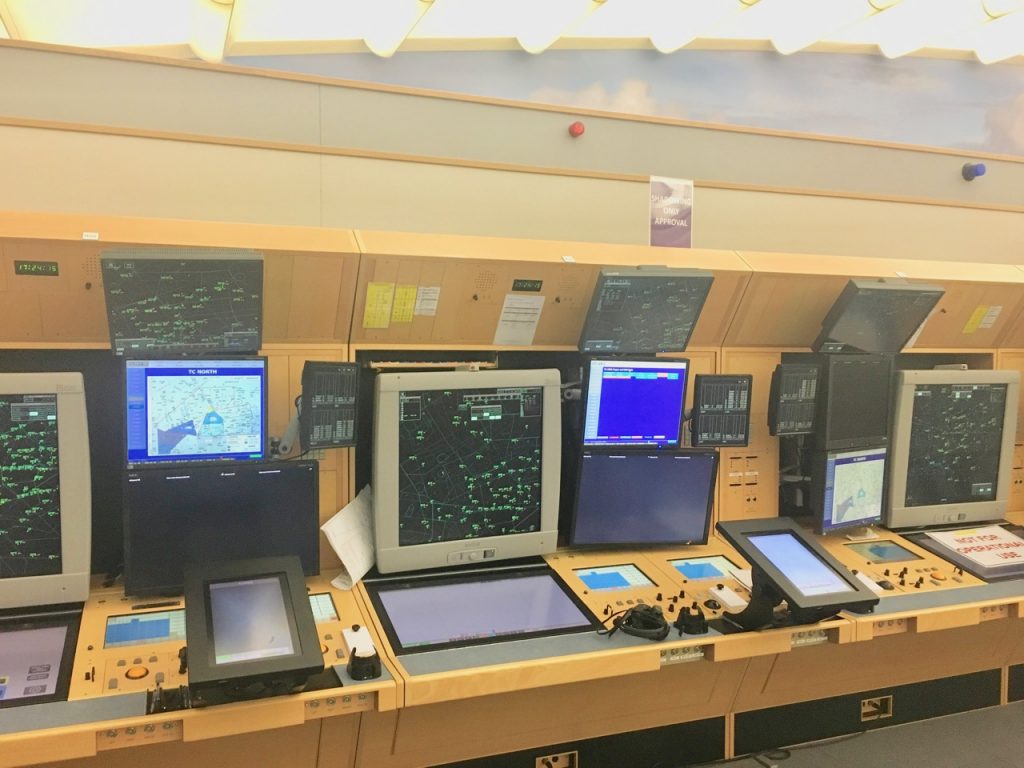 We also saw the Heathrow Special desk, which is used for VFR traffic transiting the zone – something I’ve only done myself once en-route into Denham from the south west. It’s very similar to the desk position shown above.

Finally, we saw London Information – a service I have used many times in the past. Highlighting the difference between commercial traffic service and mostly recreational/private pilots, we found three people tucked into a fairly compact space (smaller than D&D) with information crammed onto every wall. I think they had everything from the current status of Danger Areas to weather, pressure settings, notams and frequencies. They were still quite busy, so we didn’t stay for long, but did thank them effusively for the great support they provide.

NATS clearly do a very good job of safely and efficiently handling commercial traffic. Passengers taking any commercial flight have no need to worry about ATC safety in this country.

Delays to commercial traffic, especially in London area, are mainly down to lack of runway capacity. Very old and outdated airspace design makes life more difficult for ATC to manage, and moving commercial traffic entirely to tighter satellite based routing should make that easier in the longer term. The UK is definitely behind the curve in that respect.

The RAF provides a very professional and highly competent D&D service which can be relied on in times of difficulty. Every pilot is encouraged to contact them at an early stage if they get into difficulty (and are not already talking to ATC). Practice Pans are encouraged.

NATS priority is clearly all about commercial traffic. While we do appreciate the service from individual professionals at London Information, LARS regional and other ATC units, I would comment that the overall service provision for private pilots in the UK is very much less than found in many other European countries such as France, Germany or Sweden. One action in the Airspace Modernisation Policy is to review the provision of FIS service, but it does note the risk of lack of funding to provide anything better.

Definitely worth a visit and I would encourage anyone who can arrange or join a similar event through their own flying club to do so. Our thanks to our hosts at NATS for taking the time to show us around. Thanks also to John for arranging it.