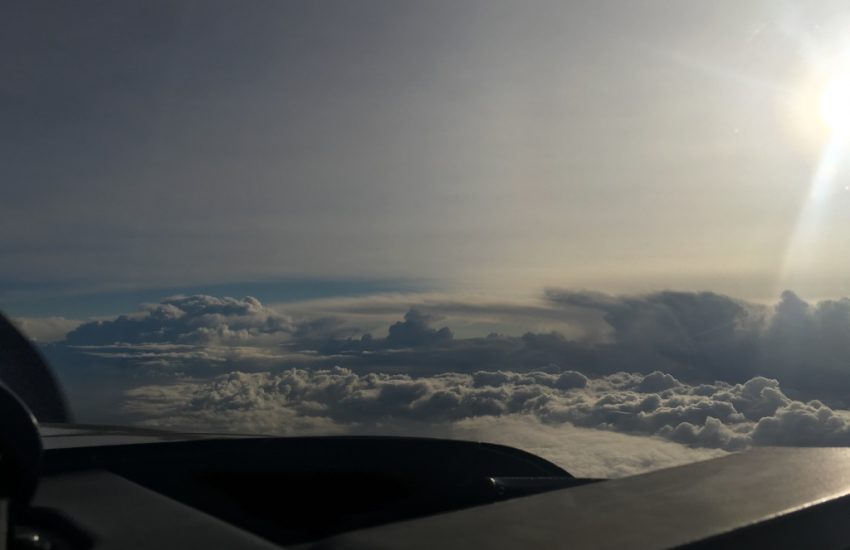 Deciding on a Daytrip

With so much of my flying time now spent instructing, I was still keen to fly my group share TB20 G-CORB somewhere. The flight profile of an instructor can often be limited to 25 miles from base, although I have managed a couple of cross-channel day trips with PPL pilots. Some of those taking my formal cross-channel groundschool later ask me to join them on their first outing, and I’m happy to “ride shotgun” with them doing all the planning and flying.

A TB20 enables airways flights although in winter you tend to be more limited by weather. The cold temperatures lead to relatively low freezing levels, and you generally don’t want to be in cloud below zero. Ice forms on the wings, windscreen and elevator (where you can’t see it), affecting the aircraft’s performance.

I’d booked CORB for the weekend, hoping to fly away for a night away somewhere in Europe with another IR qualified pilot friend Adam. This would be his first longer airways flight. Really grim weather forecast for Saturday put an end to that, but I felt the forecast for Sunday was flyable. The freezing level would be around 4000 feet, allowing us to return lower level outside airways if necessary. A front was due to pass eastwards through Gloucester late afternoon but otherwise the weather to the east looked good.

I chose Antwerp as our destination, hoping there would be enough time to visit the city briefly during a short stop. The first three hours of parking are included with the landing fee. Research on the forums indicated that the mandatory self-handling stated on the AIP wasn’t the case, and in fact there was no PPR required other than a flight plan.

I was also able to take along portable oxygen, giving us the option to climb above FL100 for extended period. This should help us negotiate the London TMA area, where the ability to fly at FL150 helps fit in with busy airliner activity. We’d wear lifejackets and carry the raft.

I used Autorouter to calculate the route and file both flight plans – it really is a great tool, providing comprehensive briefing packs and real-time updates via the Telegram App. For the first time, I also used it to file my GAR form with the UK Border Force. While that all went through very smoothly, the system doesn’t give you a formal acknowledgement (a receipt number) as with OnlineGAR. You do get a copy of the email sent, and it also prepared a GAR form for the Belgian authorities.

One NOTAM sprung out at me. The main runway at Antwerp has an ILS with a decision height of 200 ft while the other end has an RNAV LPV approach with decision height of 268 ft. Several building cranes in the vicinity of the airport are NOTAMed, with a resulting increase in both circling height and LNAV minima to 570 feet AGL. The increased precision of the LPV approach was not affected – something I checked with other IR experts. This NOTAM also alerted me to the fact that I hadn’t enabled the option in SkyDemon to show IFR NOTAMS – this is separate from one or two other IFR options, such as displaying Airways Waypoints, IFR approach plates etc.

My validated and filed route outbound was a fairly straight line along the airways, routing almost directly over Heathrow on the L9 airway. As you can see below, the actual route flown was to the south, keeping away from the busiest hotspots. Purple is filed route, black is flown.

We’ve had to move hangar for CORB, and now park behind a couple of other smaller aircraft within the Cotswold Aero Club building. A bit of manual labour was required to open the doors, pull those out onto the apron first and then extract CORB.

Our clearance on the ground was to our destination as filed, initially towards BADIM climbing FL70, remaining outside controlled airspace until instructed. Once passing FL50 and switched to Bristol Radar, we were radar vectored initially towards WOTAN and shortly thereafter towards MALBY, cleared to join controlled airspace in the climb. This was a good shortcut and shortened/simplified our airways join.

Radar headings were used throughout our airways flight in the UK, climbing at times up to FL130. ATC did make it clear at an early stage that we could expect to be routed south of Gatwick due to other traffic, and in the end we flew within sight of it towards Lydd. Once transferred to Brussels Control, it was much simpler with a routing via our filed flight plan waypoints. I have found it harder work flying near London because NATS use radar headings for everybody in order to increase traffic density. You have to be constantly on guard for new instructions, report your heading to the next sector and don’t know where you are likely to be routed or how far off-track you’ll be sent.

We remained VMC throughout.

My only minor SNAFU was not always reporting the heading when transferred to the next sector. Generally they ask you to “report your heading to 1xx.xxx” but sometimes not. This does not seem to be passed across electronically when handed off between controllers.

Equally, my ability to fly higher due to portable oxygen isn’t known to the system. Autorouter had filed me for FL100 and perhaps I should have set it to ensure I was filed higher. So instead we announced that we could accept up to FL150 when first talking with London Control, and that seemed to help with our routing/co-ordination.

Our sector through Brussels was very straightforward, and we picked up the Antwerp ATIS at an early stage. They were on the main runway using the ILS, with cloudbase broken at 200 feet and a crosswind. For some reason, I had expected radar vectors to the ILS but instead was transferred to the tower (who seemed to have full radar visibilty of me) and cleared for the procedure.

I flew this on the autopilot, descending into cloud at just above 2000 feet during the procedure turn back to intercept the localiser. CORB flew a very gentle and controlled descent, where I focussed on monitoring the instruments/flying the procedure while Adam looked out the window. He saw the ground vertically at about 300 feet and we popped out of the clouds at 250 feet with the runway lights clearly ahead. I had already powered down to anticipate deploying full flaps within limiting speed of 100 knots, and made what I thought was a good landing in the conditions.

Adam was quite impressed with the procedure and landing, having not flown many instrument approaches on autopilot and few down to minima in real world conditions. The IR training teaches you how to do this but is all flown manually and without looking out at all.

Lunch at the terminal

After walking to the terminal building in our yellow jackets, we found a window in the baggage collection area where we could ring for and be processed by immigration officials. They require a form with crew/passenger details. This can be either their published spreadsheet, a UK GAR form or filled in on arrival. Autorouter generates this form on request to make it easy. Stupidly I left this in the aircraft but it was easy to fill one out manually. If arriving/departing on the same day with the same people, then only one form is required.

Perhaps we would have had time to rush into town and have a quick look around, but we were both more interested in the trip from a flying perspective. So instead we enjoyed a leisurely meal at the airport restaurant which was to a high standard, and fairly relaxed. There was one TUI jet turnaround during our stop – it’s not a very busy airport.

We paid the landing fees at the airport office – unusually they charge separately for landing and take-off, but free parking up to 3 hours.

Departure was fairly straightforward, with our clearance immediately available when we called for start. Since it’s not a busy airport, there was no delays. A business jet started to taxi as we were approaching the hold. Having not performed our run-up on the apron (which many large airports prefer you to do), we were directed to hold at Juliet. This allowed the Jet to taxi behind us and depart, just as we called ready ourselves.

The SID (Standard Instrument Departure) is not required to be flown on the Instrument Rating course, and Adam hasn’t seen many flown. We did one on our previous trip to Lille. The Antwerp departure is very straightforward, and we used the GTN650 for guidance in addition to tuning in the VOR.

At 600 ft, turn left to intercept and fly towards the NIK radial 079. A minimum climb gradient of 5.2% is required initially, equating to 550 feet per minute at 110 knots (our standard initial climb speed). That was fairly easily achieved.

With a cloudbase still broken 200 feet, and visibility reduced to 2300 metres, we were quickly in the soup. But it seemed a short time before we popped out into glorious sunshine above the overcast, and this was the case until almost back home.

Again, Brussels Control routed us as filed, then London Control applied tactical routing. As you can see from the chart below, a fairly optimal routing and much better than as filed. We also got more navigation by waypoint rather than the tactical radar headings. First direct-to Clacton, then towards Brookmans Park. We passed almost overhead Stansted and Luton, with one aircraft clearly instructed in good time to turn right 10 degrees (as we were) to avoid us. As it got darker, we could spot more aircraft across the skies.

Once west of Luton, and leaving the busy London TMA, London Control arranged for Brize Zone to look after us. A full traffic service at that time was perhaps slight overkill – nothing to report – but better to have it than not, and we were quickly cleared to descend to 5,000 and then 3,000. This ensured we avoided icing, but meant we were lower when passing through a front which was a bit bumpy and then cleared up.

Brize passed us the weather for Gloucester and co-ordinated a self-positioned ILS straight in. The was nothing else on frequency as we were cleared immediately for the approach on handover, and again made full use of the autopilot. We were cleared to land on a runway that was “wet, wet, wet”. The runway lights were a welcome sight, and we landed, backtracked and parked up just as Cotswold Aero Club was closing down for the night.

It was great to get a good airways flight in given the poorer weather, and this wouldn’t have been sensible for many other directions due to icing. Flexibility when planning a route really helps but even an IR can’t ensure that you’ll make a business or social appointment on a set day in advance. For that you’d need a much more expensive and capable aircraft.