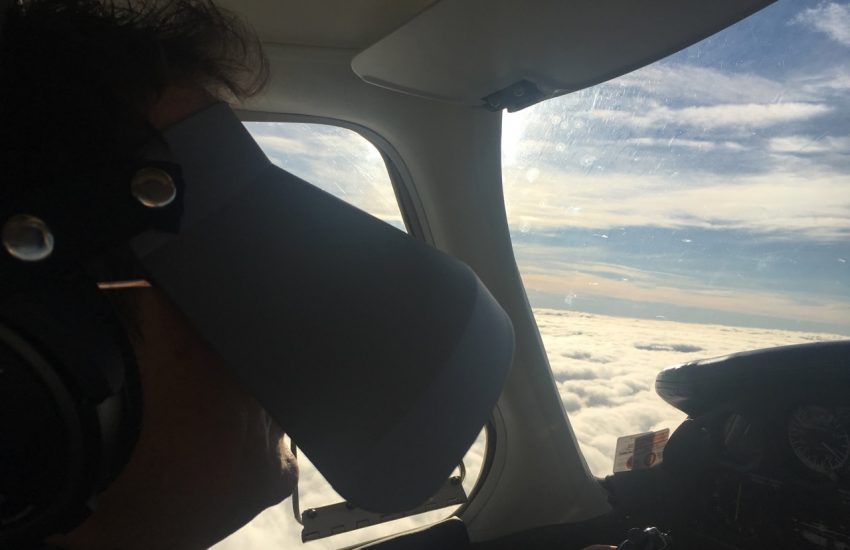 Having taught quite a few hours of PPL instruction, it was quite a contrast to be able to instruct for the CB-IR (Competency Based Instrument Rating). I’d known my first student for some time, having given him an RNAV/G1000 training session in the Redbird simulator and later mentored him on his first cross channel flight.

Andrew has a share in a Turbo Arrow based at Bournemouth, so would need to fly up to Gloucester for the formal ATO based training. ATOs are generally restricted to provide training from their nominated bases, whereas independent instruction (including instrument training outside the formal CB-IR course) can be done anywhere by any IRI (Instrument Rating Instructor). He already had an IMC with some P1 experience (but not a huge amount), had taken the CB-IR theory course through CATS, and passed all seven exams first time in September and October.

First was an assessment flight, which in my case was back seated by another experienced instructor. We flew a local flight from Gloucester including some ADF and VOR tracking followed by two RNAV approaches. It became clear there were some technical deficiencies in the aircraft. A paperwork check uncovered that the audiogram test needed to be done by an aviation medical examiner (a standard Class 2 medical on its own is insufficient). Andrew was proactive about dealing with these, although it may take some time to persuade his co-sharers to install a more accessible outside air temperature gauge. The fixed card ADF would make any NDB tracking much harder.

I am beginning to appreciate the contrast between flying the CB-IR in your own aircraft, which you are familiar with and would use after qualifying, versus flying the school aircraft (in Rate One’s case a TB20) which is well equipped and encourages a conscious change in operating procedures. The lower cost of hours flown in your own aircraft may be offset by requiring more training time, availability of a shared aircraft (not a problem in this case), and ferry flights.

Having identified some areas for improvement, Andrew was cautioned not to expect to complete in the minimum 10 hours legally permitted (few if anyone does). We scheduled three bursts of three days, expecting some cancellations for bad weather. This allowed him to balance some family time and days for business meetings alongside what would be full-on intensive training. Ferry flight time inevitably cut down available training time on several days.

We first flew local flights from Gloucester, ensuring the departure and arrival procedures and checks were followed but principally firming up on tracking, level flight and general handling (ie recovering from unusual attitudes, stalls, steep turns etc.) Time to pay attention to the scan and ensure everything is in trim.

We delved into the deeper recesses of GNS430 operation to squeeze the most of out this older but perfectly functional GPS navigator. Although not outwardly marked as a WAAS model, it had been upgraded and was capable of making LPV approaches.

Then we moved on to approaches, where a stable glide descent in trim is critical. The standard approach over a natural ridge at Gloucester always provides some surprises, change in wind direction and/or sink. Checks at the top and bottom of the descent are clearly important. A mix of RNAV, ILS and NDB are all flown until satisfactory, including the missed approach procedure.

It felt quite unnatural switching off the WAAS (so that the advisory glideslope wasn’t displayed) and detuning the ILS on box two, while we practiced non-precision approach at night in convective clouds and a strong crosswind. Normally I’d make as full use of every instrument onboard as I can. You can be assured I was hawk-eyed on the altimeter/DME while quietly monitoring progress on my iPad.

We spent quite a bit of time on “applied theory”, discussing many aspects of operational IR for the private pilot – everything from planning an airways flight, sources of weather information, tools for filing flight plans, minima (legal, Rate One operational and personal). Surprisingly few pilots who have passed the theory exams can confidently state the legal minima for single engine take-off or landing for non-commercial operations. I also arranged an evening meal with an experienced IR private pilot where we shared some practical knowledge.

I don’t believe the IR training industry is quite as pedantic about holding procedures as it used to be. Height keeping is of course critical, but whether each hold takes exactly four minutes or not perhaps less so. Andrew was quick at determining hold entries and rarely made directional errors. Sometimes holds were incorporated as part of the approach training, and some we fitted in overhead Shobdon nearby. We also used the OBS function on the GPS to fly a GPS hold at an airways waypoint.

A typical test scenario to Cardiff and back was conducted and we also flew airways to Exeter for their LPV approach. I’m quite strict about R/T and was pleased with Andrew’s general standard. Andrew also flew a mock test with another experienced Rate One instructor who pronounced him test ready.

After 10 days of training logging 16 airborne hours spread over 5 weeks, the test date was initially postponed due to bad weather. I’m pleased to say that Andrew has now been awarded a full Instrument Rating which can be used immediately. He’s also revalidated his IMC at the same time and because some of the training and ferry flights were at night, ensured he is night current for passengers.