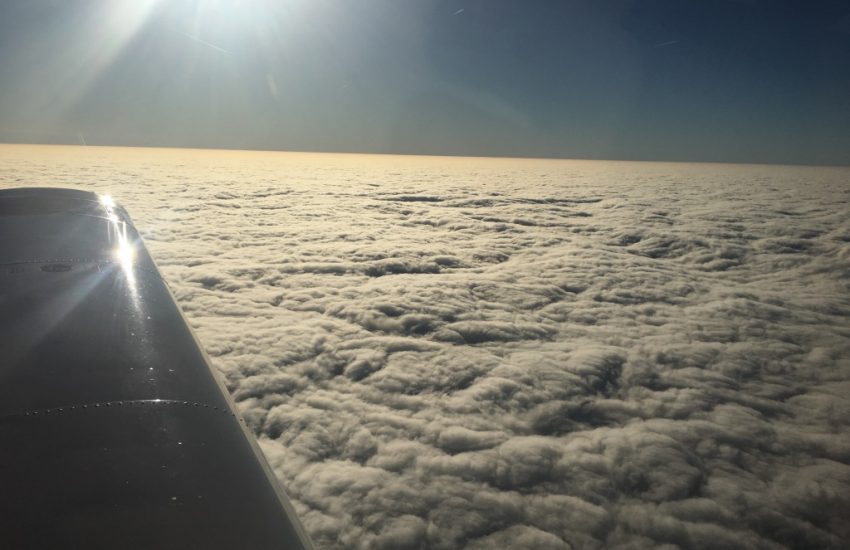 Today’s flight was opportunistic. The TB20 had been booked by my co-owners who aren’t IMC rated and who didn’t want to fly in today’s weather (cloudbase 4000 feet at Gloucester but elsewhere around 2000 feet). Although cold (hence a low freezing level), the cloud layer was thin and I thought quite feasible to fly above it otherwise remain close to base. This was confirmed by pilots at the club who had already been out flying today.

I thought about visiting Pembrey, which I hadn’t been able to make it into on a previous trip due to very low cloudbase. The departure was pretty straightforward, climbing into the cloud at about 2600 feet and popping out at 3600.

There’s no need to file an IFR flight plan for such a short trip. In the UK, I could simply depart VFR and then decide myself to become IFR without needing to inform anyone.

I spoke to Cardiff for a Basic Service initially. There was very little about, and upgraded me to a traffic service at their suggestion. I was quickly granted approval to transit controlled airspace at 6,000 feet via the BCN VOR.

The tricky part was then how to descend through the cloud layer safely. I’d normally consider a gentle controlled descent in a straight line, as you would on an instrument approach. But there was high ground enroute – Pembrey itself is on the coast at an elevation of 16 feet. One option was to fly past and turn back, reducing height over the sea. Instead, having confirmed a cloudbase of at least 2000 feet, I elected to gently circle down in the overhead and make a standard overhead join.

The ground came into view at about 2,600 feet with the airfield clearly in sight. A helicopter reported wide base leg as I turned downwind. The transition from IFR to VFR can be difficult, but with this much clearance and only one other aircraft to see and avoid, it was straightforward.

The airport is an ex-RAF base which has had some considerable investment over the years. It’s quite a remote (ie sparsely populated) area of south west Wales, and was owned by an ex airline pilot who had a vision of commercial operation. At one time it even had an instrument approach. There is a twin prop available for charter, but no regular scheduled services. Open at weekends and otherwise by arrangements.

A cafe and shop attracts locals and tourists for lunch and snacks.

I needed a bit of help from the Operations staff to get off the grass parking onto the hard taxiway which was much appreciated. Apparently there used to be a parallel grass runway in the past, but the topsoil had been sold to a racecourse nearby in exchange for clay soil. It gets very muddy and boggy in the winter, so not good for aircraft.

The return leg was fairly uneventful, climbing ontrack up through the cloud, routing via BCN VOR at 5,000 feet (so outside controlled airspace) and then for the RNAV approach to land. Cardiff kindly co-ordinated my handover to Gloucester, which is less common when they are busy with more traffic. There was a reasonable tailwind, increasing by 130 knot indicated airspeed to 155 knots groundspeed.

As you can see from the GTN650 display below, I had already activated the RNAV instrument approach with over 40 miles to go, and had started the initial descent. The box gives a clear ETA at the initial approach fix (REKLO)

As an instrument instructor, I’m finding I rarely touch the controls these days, so it can be easy to get out of practice of manual IFR flight. I really should have flown the approach manually, but just couldn’t resist letting the autopilot do its magic and fly a precise track down to minima.

I’ve distilled the outbound flight into the 8 minute video below.