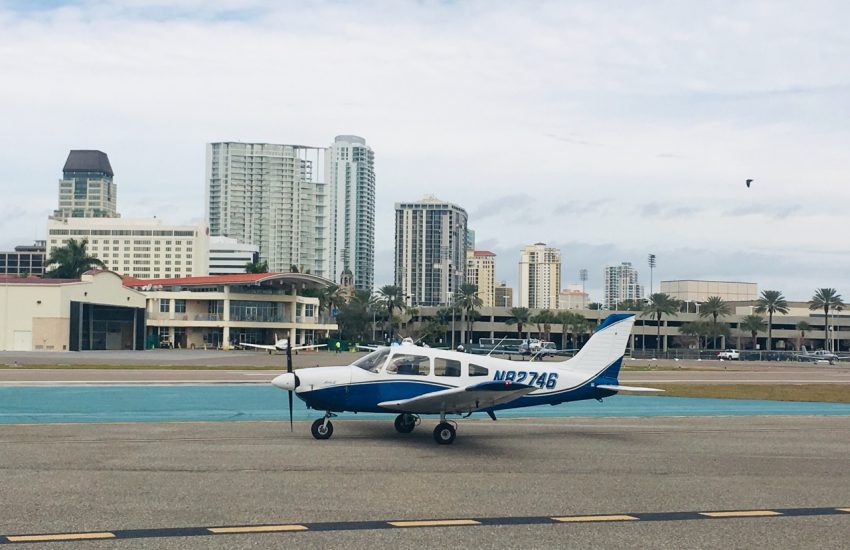 This year’s US flying holiday was a two week trip with my wife getting away from the cold British winter to the warmer sunshine of Florida. I’d arranged to rent a PA28 from St Petersburg (KSPG) for four days exclusive touring of Southern Florida, but first I’d need to be checked out by the flight school.

Legally I wasn’t due an FAA Flight Review until the end of May, but it seemed sensible to combine this with the checkout – it might need a little longer to ensure all the requirements were met. Some view an FAA Flight Review as a necessary evil, demonstrating skills you know you already have and answering questions that seem to be irrelevant or pedantic. Others try to get the most out of them, asking plenty of questions about the local area and procedures, plus insights into any new areas being explored.

My instructor Jake and I shared this latter view and we started the ground section by discussing the planned route of my solo tour, the classes of airspace involved and the clearances I could expect to get. PPR (Prior Permission) just doesn’t seem to be done here at all unless you want to check the price of fuel or ramp fees. If an airport isn’t NOTAMed otherwise, you just fly in and land. While I would even be accepted at very large airports such as Fort Lauderdale International, I could expect lengthy delays to fit in with airliner traffic and costly FBO fees.

We discussed the best ways to find up to date weather/NOTAM/airfield information, including the ForeFlight App, WXBRIEF freephone briefing service and various websites. I asked a few questions about the subtleties of CTAF, UNICOM and MULTICOM that weren’t entirely clear to me and got some practical answers. Unlike some previous Flight Reviews, I didn’t have to recite the visibilities required for VFR in each class of airspace, nor specify which documents must be carried onboard each flight.

My choice of aircraft was a PA28, which I’m very familiar with. This model was an Archer II, supposedly a slightly upmarket version of the Warrior, with a 180hp engine. I couldn’t really figure out any significant difference between the 180hp Warrior that I fly in the club at home and this one. Avionics-wise it had traditional six pack round dials, disabled ADF and VOR2 but did have two radios, one of which was an RNAV capable Garmin GNS430W. The aircraft was also fitted with the mandatory ELT (Emergency Location Transmitter). It met the minimum legal requirements for IFR.

During pre-flighting I noticed there wasn’t a rotating anti-collision beacon. Apparently for older models originally built without one, it remains acceptable to use wing strobe lights instead. Clearly this is a disadvantage when on the ground near people or if in cloud, and I suspect would not be permitted for European registered aircraft. Other “squawks” included an inoperative fuel primer (four squirts with the throttle instead) and an inop EGT gauge, but everything else looked ship-shape.

At Whitted airport, there’s no call required prior to start, and after listening to the automated weather service (AWOS) which unlike an ATIS didn’t state the active runway in use, you use a separate ground frequency to request taxi with your flight details. The call is fairly simple:

[Surprisingly, after reading back the numbers including the altimeter setting, my instructor told me that readback of the altimeter was not required for VFR departures (I looked up the reference which I think is FAA AIM 4-3-18). Readback on the ground is mandatory in the UK.]

After power checks were completed, without asking to change frequency, simply switchover and tell the tower you are ready to go. It’s quite likely to be the same controller.

We flew west, climbed once past the shoreline and clear of Tampa’s Class Bravo airspace, then flew steep turns and several stalls which I was very happy with. My instructor hadn’t heard of the HASELL check mnemonic but didn’t disapprove. With those out of the way, we requested and were immediately granted approval for touch-and-goes at the nearby Clearwater airport (KPIE). I nailed these with a couple of greasers and so to finish off we requested and flew the RNAV 07 approach back into Albert Whitted with a circle to land on the newly assigned runway 18. I have to say the cranes working on the approach path were a little high for my liking, making it a glide approach to ensure adequate clearance.

Operationally, the aircraft flew exactly like it would in the UK. There are a few local operational nuances though – carb heat is rarely used. This is entirely in line with the operating handbook, unlike a Cessna (which has a Continental rather than Lycoming engine).

We had packed a good amount into the required 1 hour flight, and my instructor told me he was satisfied. I also felt comfortable that I was back up to speed with airspace, radio calls and procedures relevant for my trip. He signed my logbook with the requisite wording so my Flight Review is good for another 24 months, and I could solo hire the aircraft as much as I wanted.

Next, read my FAA Instrument Proficiency Check on the same aircraft.