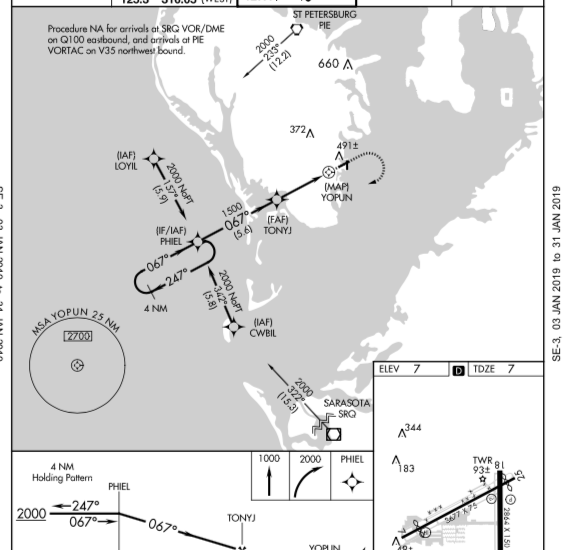 An Instrument Proficiency Check (IPC) isn’t legally required for an FAA instrument rated pilot provided that currency is maintained – you need to fly 6 approaches every six months, extended by another 6 months if you use a simulator or safety pilot to catch up. Regular pilots can do this for years without ever needing to be retrained or tested. Only if currency lapses, would you need an IPC with an Instrument Instructor (so called CFI-I). Unlike Europe, there’s never a need to fly with an examiner after passing the initial IR checkride.

Technically I didn’t need an IPC since St Pete allow renters who are Instrument Rated and current to fly IFR without any additional checks. Many other US flight schools would insist on renters completing one with them first, especially foreign pilots. I had previously taken the FAA Foreign Pilot Instrument theory exam and added the Instrument rating to my US “piggyback” 61.75 licence. Even at that time I didn’t need to take an IPC to make it valid, although I did do one at the time. That was with a relatively new instructor and I didn’t feel I got a lot out of the session, so was hopeful this would be more worthwhile and it was.

My assigned instructor was Cora, clearly a very experienced and competent instrument pilot, flying a King Air commercially and not simply on the hour building route towards an airline career. I highlighted that I wanted to understand more about the differences between US and European IFR procedures, and become more confident about filing IFR flight plans and requesting IFR when airborne if necessary.

Cora explained there are three types of IFR flight plans:

With the busy Tampa airspace close by, controllers frown upon the third option and sometimes may refuse those when busy. Instructors are strongly encouraged to file flight plans in advance even for the more trivial shorter training sorties, like the one I’d fly today.

She then showed me how to file a flight plan through ForeFlight, the popular US pilot app on my iPad. After creating a simple profile for our Archer aircraft – aircraft reg, type, cruise speed, fuel consumption/endurance, equipment (just a /G for GPS equipped) – and a few waypoints (KSPG, KPIE, KSPG) at what seemed like a ridiculously low altitude of 3,000 feet, I pressed file and it was done. I did add my name as pilot, but left blank the optional FAA Licence Number field blank. I would never think of filing a flight plan in the UK at such a low altitude, nor for such a short flight (13 minutes).

ATC are quite tolerant of delays between the filed and actual off-blocks time. In practice, anything up to 2 hours is fine, more than that and you might want to contact the tower or actively delay/refile.

The default format of the flight plan was filed as FAA. Foreflight emailed a strong suggestion that I should use ICAO format in the future, and the FAA even publish a straightforward 5 minute video explaining how to do that. I believe that European flight plans are already ICAO compliant so this shouldn’t be an issue. In simple terms, the PBN equipment configuration of the aircraft needs to be specified in more detail.

The Archer had GPS with integrated VOR/ILS, but no second VOR, ADF or DME.

We discussed the plate below for the KPIE ILS, including the MSA and minima. Without a DME, you rely on the GPS to provide distances on final approach. It seemed strange that the threshold wasn’t zero as found in the UK, but the figure of 1.7 miles matched that on the plate. Cora also checked that I understood the distance shown prior to the final approach fix was for each leg and not the distance to the threshold.

We also discussed the minimum altitude/heights considered acceptable to pass an IR checkride. You have to get low enough to show you can fly to minima, but are not allowed to descend below the minima under any circumstances. So where in the UK it would be OK to be actively going around/powering up on a precision approach such as an ILS and briefly dip below minima, in the US that’s a fail. Please let me know if I’ve misunderstood or misinterpreted that slight difference.

After startup, I requested IFR clearance on the ground frequency before taxi while the engine warmed up.

Once stable on the outbound leg, the foggles went on and it got very dark outside. The tower instructed us to switch to Departure (on the frequency previously given). I announced our callsign and altitude to Tampa Departure, who asked us to squawk ident, then for our training requirements. This was immediately approved.

We climbed when instructed and did some general handling. The AI was then considered faulty and hidden from my view – the rest of the flight flown entirely without it. An ILS to minima at KPIE, published missed approach to the hold, inbound on the RNAV with a circle to land. We swapped seamlessly between Tampa Departure and the Tower controllers.

FAA Pilot Test Standards (PTS) clearly specify the various skills and procedures that must be included in an IPC and the permitted tolerances. I was surprised to find that up to 3/4 scale deflection is allowed en-route, in the hold and during final approach compared to 1/2 scale for EASA tests. The hold we flew was guided by the GPS, with the visible moving map and CDI making it comparatively easy.

From my limited experience, it seems to me that neither the FAA or EASA are significantly more or less difficult than the other – they are both different and training is essential to ensure you meet the examiner’s expectations. An Instrument Rating requires a high standard of skill and knowledge in both cases.

My logbook entry was signed and the required wording added into the notes page, with the instructor’s licence number and instructor rating expiry date. This is the only written record of the IPC – the instructor won’t notify the FAA, and there’s no FAA paperwork to file.

Next, read about the first leg of my tour (from St Petersburg to Naples) around South Florida for which I needed to file IFR.