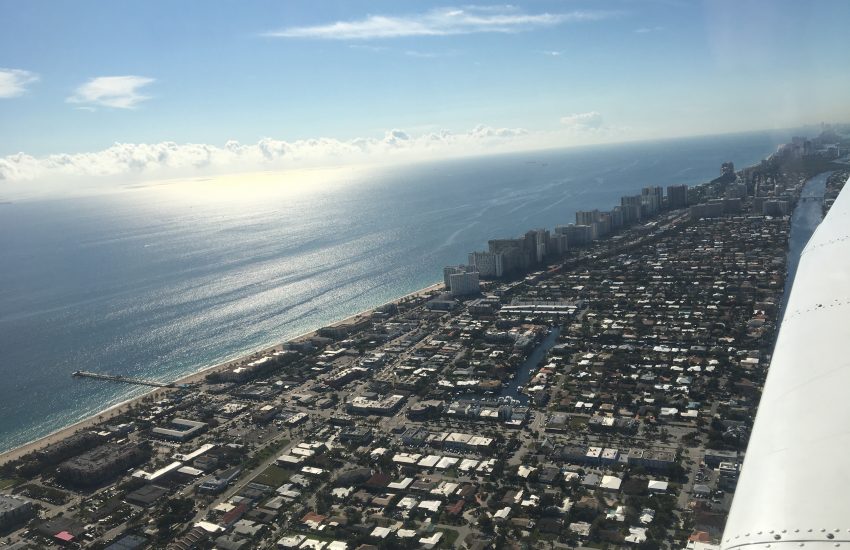 Last day of our four day tour of Southern Florida, and it was going to be an interesting two hour flight back. To add interest, I planned to fly low level further up the east coastline before heading inland, and stop for lunch at Okechobee. This would involve talking directly to the tower controllers of several airports in quick succession: Pampano, Boca Raton then Palm Beach for what is termed a shoreline transition – flying low level just offshore.

While we had wall-to-wall sunshine on the east coast, the Tampa area reported IFR conditions with a low overcast. An Airmet warned of general low overcast throughout the day, but the TAFs were more promising. I didn’t file a flight plan and just requested Flight Following prior to departure from Fort Lauderdale Executive.

Just as well we weren’t planning to fly this route a couple of days earlier, when the President was in residence at Mar-a-Lago. There’s a TFR affecting a huge volume of airspace up to 18,000 feet for 10 and 30 miles around. But since he’s back in Washington, we could fly right along the beach next to it, directly east of Palm Beach airport.

Banyon FBO at Fort Lauderdale Executive has been voted the #1 independent FBO in the US, and it certainly seemed luxurious, friendly and reasonably priced. There is no ramp or parking fee for up to two days stay provided you buy fuel.

Clearance Delivery allocated me my Flight Following squawk code and departure frequency before startup. There was some slight confusion about planned flight altitude – I wanted to be around 1000 feet while offshore the coast, then climb to 3000 when heading inland. But it seems there has to be just one altitude specified. We compromised on 1500 for the record – in practice this can easily be changed when airborne. I got this all sorted out over the radio prior to engine start, when the Hobbs meter starts charging.

My take-off clearance was to climb straight ahead to 1000 feet (towards the coast), with a change to an unexpected (but perfectly reasonable) frequency for Pompano Tower to the north. They shepherded me north along the shoreline, approving a “transition” abeam their field. We saw a couple of light jets departing. Reporting abeam the lighthouse, I was then transferred to Boca Raton tower for a similar “transition”. Implicitly cleared through Class Charlie airspace (because I was talking to them) at not above 1000 feet west of the coastline.

Then we spoke with Palm Beach Tower and continued our low level offshore beach tour. This would not have been possible a couple of days earlier, when the President was in residence. Today, we flew at low level directly offshore the Mar-a-Lago golf course and hotel.

A couple of other aircraft were called out to us, a Cessna heading opposite direction at 500 feet that we spotted and another behind us that we didn’t.

Once clear of the Class C, I was cleared to my destination routing and altitude at my discretion. As the shoreline buildings petered out, I climbed and headed inland at 3000 feet. The terrain isn’t particularly interesting, but it only took about 15 minutes before we were arriving at Okechobee.

The CTAF was busy with what seemed like four or five other aircraft. One was practicing circuits while others arrived and departed. Runway 05 was in use, but one or two other aircraft used the cross runway to expedite their arrival. Since it was quite busy, I took the cautious approach by flying overhead and past the airfield, turning back to join 45 degree downwind behind an “Experimental” (as they call any homebuilt aircraft here). A tailwheeler which I think was an RV.

I flew a tight pattern to land in sequence shortly after the RV vacated, and in turn exited promptly for the landing traffic behind. There’s no landing fee or paperwork to use these untowered airports, but fuel and other services were available, as was a pilot briefing area.

Below is a 10 minute summary video of the highlights of the flight including ATC audio with subtitles.

I self-announced my departure and initially flew north to keep well clear of other arriving traffic heard on the radio, before turning south west to keep clear of the military restricted area/practice zone. The route took us south of Sebring which had just held their 15th Sport Aviation Expo a couple of weeks earlier.

You can make out an inversion layer in the photo above, so even at 3000 feet it was starting to get a little bumpy from the heat of the day. I climbed up to 4500ft which was much calmer. The terrain remained pretty indeterminate with nothing much to see.

I delayed my call for Flight Following but about half way to the Tampa area I thought it sensible to call up the frequency shown on the chart. Actually, I was still about 20 miles outside their coverage area, but they helpfully redirected me with a frequency for Miami Centre. I could also have looked this up in the AFD (Airport Facilities Directory) through ForeFlight (see 132.25 below), but I find this much more clunky and awkward to retrieve locally relevant frequencies than SkyDemon when airborne.

After a seamless handover to Tampa, I was cleared into the Class Bravo and given what we in the UK would call a Traffic Service, and in due course a couple of descent instructions. I tried to listen to the weather service at St Petersburg on box 2, but the main radio was so busy it took quite a few minutes to discern the key information. Down at 1500 feet before we crossed into the bay, it was getting a bit bumpy but St Pete Tower gave us a straightforward downwind join for runway 07. A couple of right hand turns, power reduction and flaps landed us back onto the runway.

Very brief video of this last short hop back to base below.

The flight school were happy to see us back, mentioned that they too had had some IFR weather in recent days, then quickly sorted out our paperwork. Time to soak up some sunshine for a few days before we headed back home.

The four day tour logged 8 hours Hobbs time (7h35 in my logbook). I was fortunate the school waived their normal daily minimum hire, which may not be the case at other times of year or for other aircraft.

I was pleased to have completed an IPC which showed me how to file and fly my first FAA IFR flight plan, and introduced me gently into how IFR works in practice here. That alone avoided us getting stuck on two of our four days. The tour was almost exclusively VMC flying, but had some exciting aspects from flying over alligator and shark-infested waters, very interesting overnight stops and spectacular views flying low level along the East Coast underneath the main flight paths of international airports. It beats the snow and colder weather at home and was a really enjoyable experience to share with my lovely wife.