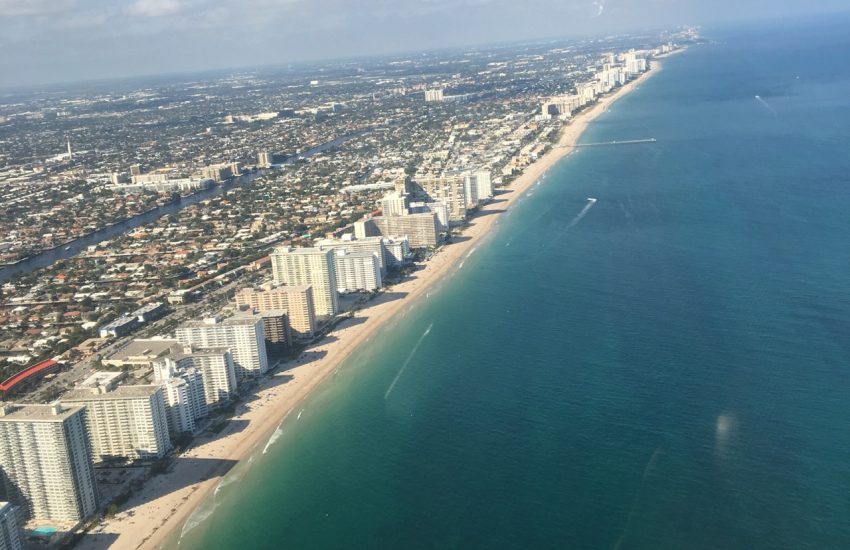 Surprisingly cloudy start to the day – I thought it was supposed to be wall-to-wall sunshine in Florida all year round. METAR reported overcast at 300 feet, with a TAF suggesting it might rise to 1500 (for VFR) around lunchtime. Reports from further north were better, but still in the range of 1500 to 2000 feet. A NOTAM check confirmed that the Presidential TFR which would have limited our tour at the weekend was no longer in effect.

Since we were in no hurry, we took another stroll around the town before heading out to the airport – about 15-20 minute ride away. It was quiet at the FBO. Discussions with other private pilots suggested low cloud extended all the way to Marathon and then thinned out. The cloud tops weren’t that high, just a thin layer at 1000 feet or so, but rendered the airport IFR only. One VFR pilot was considering requesting Special VFR departure, but might have to fly for 20 miles underneath the clouds at 500-1000 feet until clear.

I filed an IFR plan routing up the Keys and it came back with an almost direct track north via CORNU and the DVALL3 arrival. I spoke to the Tower who explained I could ask for an overland clearance if I wanted to avoid the longer overwater leg. I misunderstood this, thinking that could be done over the radio on the ground before departure. But at any time later once clear of cloud, I knew I could also cancel IFR and continue VFR pretty much any route I liked.

We were glad to get a ride out to our aircraft, parked towards the end of the long line. It didn’t take long for the pre-flight. My call for clearance give me the direct track as before, and I was told that I could request an alternate route from departure only once airborne. My clearance was:

Tower cleared me for take-off with a left turn 360. When airborne, I was told to “contact Navy Departure”. Already in the turn and entering the cloud, I was again instructed to fly heading 360. I asked for a re-clearance to fly over the land, and within 10 seconds was re-routed to fly heading 080.

Once abeam the tethered blimp, I was given “Direct Marathon” which was only a few degrees different. Miami centre took over my flight plan and still seemed to be keen on a DUVALL 3 arrival. I explained that I wanted to route via VKZ (a VOR east of Miami) then direct and was cleared to do so. I knew I would either have to cancel IFR or expect to be re-routed clear of the busy international airports at this altitude.

Homestead approach took over, and the frequency was pretty quiet. Once back over land, I cancelled IFR and descended to 2000 feet VFR with flight following. I was briefly vectored to the east of Ocean Reef airport (a small island resort with its own golf course) to keep clear of a departing jet.

Then back to Miami approach, cleared initially at 2000 feet on a heading to the east of Miami beach. Later, I was instructed to descend to not above 1500 feet (which would keep me below the Class Bravo and reminded I was not cleared to enter it).

This gave us great views of Miami beach from just offshore. I dropped down to 1000 feet to get a good view of the skyscraper hotels and the beach itself. Further north, I was handed over to Fort Lauderdale approach for “the transition”, and told to fly at 500 feet not less than 3 miles offshore.

This is directly under the final approach track into Fort Lauderdale International, and we were warned about possible wake turbulence. The airliners were also warned about us (we’d no doubt show up on their traffic alerting systems), and we could look up and see a couple of them on long final to our right and left perpendicular to our track.

Once clear, Approach re-cleared us to up 1000 feet towards the shoreline remaining outside the Class Delta of Fort Lauderdale Executive, and told us to contact that tower. We already had the ATIS, and knew that both runways 27 and 31 were in use. I was given a straight-in LAHSO (Land and Hold Short) clearance – my first. This meant I must turn off the runway (or stop and hold short) of the perpendicular runway 27 ahead which was also in use.

After vacating, and not wanting to get lost at such a large and unfamiliar airport, I asked for progressive taxi to the Banyon FBO. That’s easy, said the ground controller, it’s directly ahead of you! We were quickly marshalled to our parking spot, a few yards from the main building.

This is one of the most plush and well appointed FBOs I’ve been in, but not expensive (free overnight parking if you buy fuel). It’s rated the #1 independent FBO in the USA. There’s also a well stocked pilot shop to browse. The local restaurant was closed by this time, so we took an Uber to our hotel and chilled out there.

The video below captures the highlights of the flight and includes some ATC audio with subtitles.

Next up, the last leg of our tour flies north up the shoreline just off Palm Beach, before turning inland to stop for lunch at Okechobee and then back to base. Read about that here.