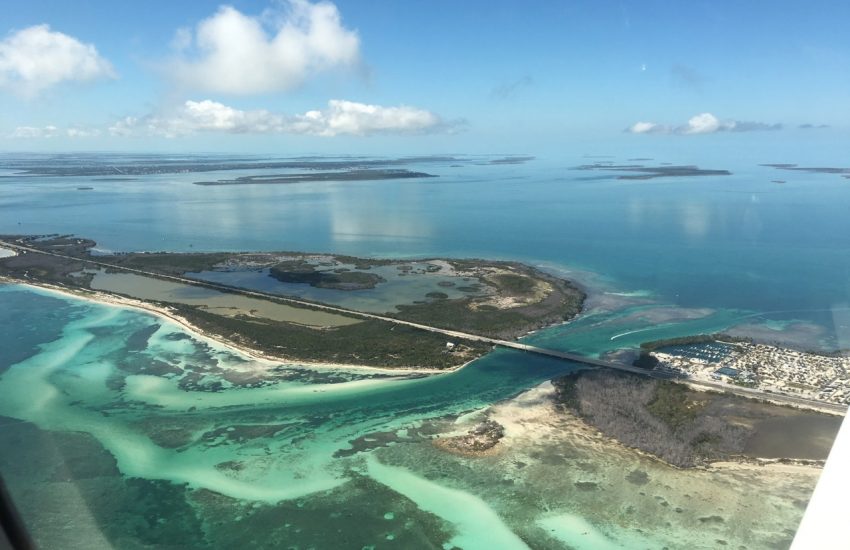 Today was highly anticipated to be the most exciting of the trip. We’d be flying over the Aligator swamps of the Everglades (one rogue student pilot was reportedly eaten), then over shark-infested waters across to the Keys. Just to add to the tension was a TFR (Temporary Flight Restriction) because the US Vice-President was visiting Key West – any aircraft not complying with the restrictions could be shot down. And I might not have mentioned the tethered blimp that’s flown at 14,000 feet to keep a close eye on illegal drug running and immigration activity – the wire has taken the wing off a stray Cessna. Or the fast airforce jets based nearby.

On the plus side, this is almost entirely outside controlled airspace, and the high level of coastguard presence means that if you did succumb to a forced landing, it wouldn’t be long before someone came to find you. Nonetheless, we wore lifejackets borrowed from the flight school.

I called 1-800-WXBRIEF from the hotel, partly to check anything I’d missed but specifically the TFR NOTAM about the Vice President’s visit. The briefer wasn’t familiar with the south Florida area, and the TFR also appeared to be fairly new to him. He did agree with me that it read that aircraft arriving/departing were excluded from restrictions as long as squawking and talking to ATC. But he suggested I double check with Centre when airborne. We decided to stop at Marathon for lunch (and topping off with cheaper fuel), which worked out well.

Departure was remarkably straightforward. Ground and Clearance Delivery were combined, and Ground accepted my request for Flight Following by allocating a squawk code and next frequency. With landing traffic and three other aircraft at the hold, we were cleared for take-off in front of a Citation. Tower asked me to turn south as soon as possible after take-off to expedite its departure.

I flew south initially, over Marco Island airport which gave us a good view of that resort. Then headed east toward Dade Collier – a huge airfield in the middle of nowhere that is apparently popular for airliner training. There was little GA traffic on frequency, the odd longer range aircraft flying IFR to/from Key West and Marathon. Miami Centre thought I was flying into Key West directly (presumably from my phone call to the briefer), but updated my details when I explained I was stopping at Marathon first. No need to file a separate flight plan.

I flew at 5,500 most of the way and started a slow descent as the Keys came into sight. About 10 miles out, I cancelled Flight Following and switched to the Marathon frequency. There is no tower, so after listening to the Automated Weather, I self-announced on the CTAF that I would position downwind 45 degree join for Runway 7. There was only one other aircraft on frequency, about 20 or 30 miles away, so no conflict. It was a straightforward half-circuit flown for a good touchdown.

After taxing to the FBO, they asked how long I planned to stay, allocated a parking space and the fuel truck arrived as I shut down. There was no fee as long as I filled up with 10 gallons.

The short 6 minute video below captured the best bits.

We took a cab about a mile east to the Island Fish Company Restaurant which was absolutely fabulous – really great seafood (with plenty of other choices) – and clearly a popular venue. Walking back slowly, we passed by a few interesting shops and also popped in to the Experimental Aircraft museum next door to the FBO (Experimental Aircraft Association in the US looks after homebuilt planes, very similar to the UK LAA). It was pretty small but they did have a nice 200hp Cub and a seaplane.

Our second flight of the day was direct to Key West and took about 30 minutes. It could not have been much more straightforward. I took off from runway 07, but given the calm wind I could perhaps have just as easily departed 25. It’s entirely pilot discretion and there was almost no other traffic around.

After the self-announced departure, I called up Miami Centre for Flight Following, was given a squawk, identified and immediately transferred to Key West Approach. Then at my discretion, flew pretty much direct on track for a long straight-in final, passing close to the naval airbase.

We heard other traffic on frequency including a Delta 737 passenger jet.

Only when about 5 miles out were we asked to slow down a bit for sequencing with a faster Cessna 207 aircraft heading in from the north. We squeaked in as he vacated the runway, then the Delta passenger jet landed about a minute after we had vacated.

Signature operate a busy FBO on the island, and it doesn’t always get the highest customer feedback. But given the small space and high workload, we were efficiently marshalled into our spot, asked if we wanted fuel/how long staying, and shown where to exit the apron. We took a cab into town, staying just off the main Duval Street.

Short video of the flight below, including ATC audio with subtitles.

Key West feels very much like a older-style town because you can walk around the streets and discover such a wide variety of low-rise buildings with plenty to see. Not just Sloppy Joe’s, or Hemingway’s house, but the founders of city, the Cuban tobacco/cigar industry, the shipwreck salvage business and more. There’s plenty for tourists to do, especially fishing, sailing and watersports, but relatively few beaches. Some aspects are a bit garish/tacky, but quite a lot is upmarket/interesting and different.

Watching the sun go down at Mallory Square would take a long time to tire of.

Next, read about our third leg in our tour, flying low level north close into the Miami shoreline, then further offshore Fort Lauderdale directly underneath the main airliner approach track.