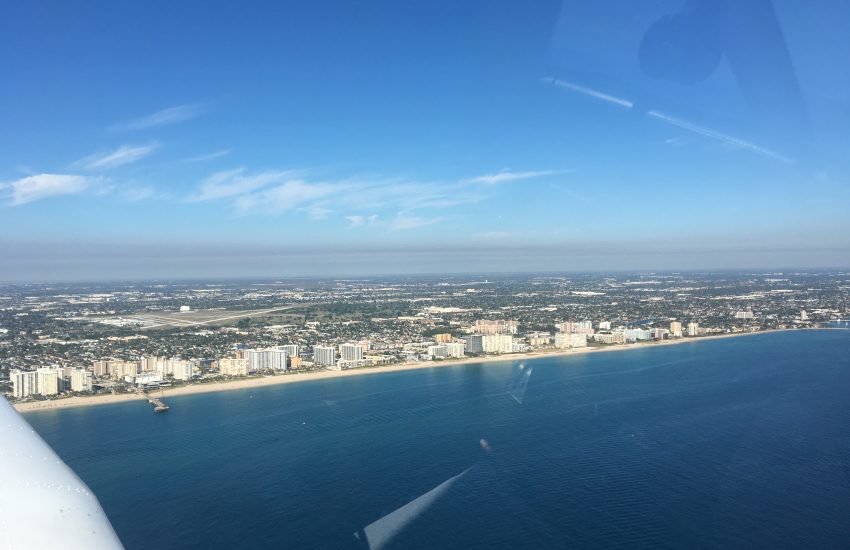 Having flown in the US both on business and with several pilot friends, I felt I was experienced enough to plan a holiday there with my wife. We’ visited for two weeks, during which I rented an aircraft exclusively for four days. I wanted a Flight Review to be included in the Club Checkout, and also opted to schedule an Instrument Proficiency Check. I even managed to pop into a couple of Air Museums and visit a UK-oriented flight school too.

I chose to rent through St Pete Air, a flight school in St Petersburg, just to the West of Tampa. They operate from Albert Whitted Airport (KSPG), an exclusively GA towered field. From there, we would fly down to Naples, Key West, up the west coast past Miami to Fort Lauderdale then back to base. There was no minimum hours or daily rental charge, and I was even offered the members’ hourly rate of ~£99/hour for an Archer II (timed on the Hobbs meter which counts engine hours). This pricing may not be available at other times of the year, other aircraft or on other occasions.

I’ve separately posted about each flight in turn:

What I had overlooked was the possibility of visiting Piper’s factory in Vero Beach. There are two organised tours daily Monday-Thursday which you can book up in advance. It would also have been great to fly a bit further north up the east coast to Kennedy Space Centre. Maybe next time.

Lakeland Airport in Central Florida is perhaps best known for the Sun-n-Fun Fly-In/Festival, which now attracts around 100,000 visitors in April each year. The event is smaller than Air Venture/Oshkosh in the summer which hosts 500,000 visitors, but is growing fast. The proceeds help fund various charities and scholarships. Since I was driving by the airport, I dropped in to see what it looks like.

Although there were a few small businesses around, it was empty. There were fields littered with port-a-loos, presumably for the show and campgrounds during the main event.

The airport also hosts the grandly titled Florida Air Museum, which is actually pretty small. I wouldn’t make a major detour to visit this one. It celebrates the world’s first commercial scheduled air service across Tampa Bay in 1914, which cost $5 and took 20 minutes compared with 11 hours by rail or 20 by car. The highest altitude was only 50 feet but it did reach 60 miles an hour. There were also displays about Howard Hughes and a handful of aircraft on display.

The Pilot Mall mail-order warehouse round the back could easily have tempted me if there was something I needed.

Not far away is the Flight of Fantasy museum, currently much reduced in size during major refurbishment. Kermit Weeks, the owner, hopes to create something of a Disney style/size attraction in the medium term and has amassed a good number of interesting aircraft for enthusiasts to look at.

The very knowledgeable tour guide walked us round the hangar starting with WW1 aircraft, explaining some of the issues with these early designs. For example, a rotary radial engine actually rotates with the propeller as a method of keeping cool. Unfortunately this makes it into a very effective gyroscope, so while turning right was fine, left turns at slow speed were almost impossible. Not a winning design.

During WW2, US aircraft manufacturers built P51 Mustangs with the American-designed Allison engine. This wasn’t as powerful at altitude as the UK designed Merlin found in Spitfires, and couldn’t climb as high so the UK engine was quickly adopted too. The P51D Mustang had long range tanks sufficient to fly to Berlin and back.

I only just restrained myself from the opportunity to fly a Stearman.