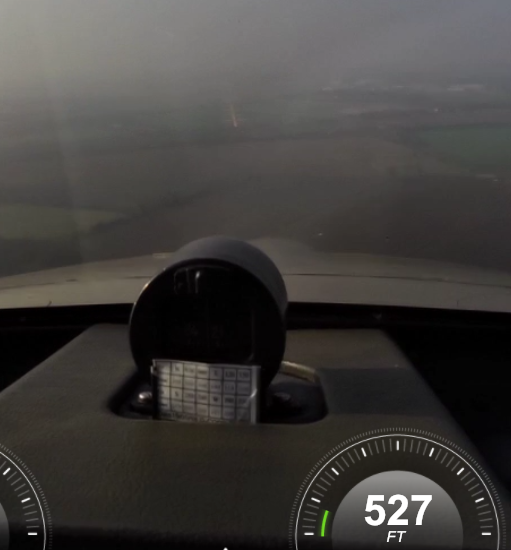 A daytrip to Cambridge takes either 3 hours by road or 45 minutes in the TB20 from Gloucester – it should be an easy choice. But add in time to drive to the airport (1 hour), move the aircraft out of the hangar, fuel and pre-flight (30 minutes), lockdown and paperwork on arrival, and transport into the city (30 minutes), and it all starts to look a bit more marginal. Fortunately my wife thought that it would be much more relaxing and enjoyable going by air than sitting the the car all day. I found it hard to disagree.

PPR required the day before

My pre-flight planning the day before was mostly concerned with the visibility. A low cloudbase but above IFR minimums (with instrument approaches available at both airports), visibility in thousands of metres rather than hundreds.

While I don’t have historic evidence of the forecast, here’s the METARs published on the day for both Gloucester and Cambridge. They’re listed most recent first, i.e. backwards in time order.

So for the morning flight, it looked like I’d be departing into a 1000 feet cloudbase with horizontal visibility of 3,500 meters. Arrival would involve a similar low cloudbase of 900 feet, slightly better visibility of 4,500 meters. This is very much within limits for a private pilot/single engine – the low visibility being better than required for VFR – but I would classify this as an IFR flight.

Cambridge now require 24 hour PPR by calling the tower. The aeroclub, who provide any “handling” (mainly collecting the landing fee) don’t require any notice. Sadly the airport is now closed to visitors at weekends, when no ATC operates but home based aircraft can operate self-announced. Departures must be airborne before 6pm when the tower shuts down, which is slightly limiting.

Gloucester, having reclassified itself as a private licenced airport (rather than a public licenced one) is no longer required to accept all incoming traffic. PPR has been introduced, requiring a phone call. Since we already had to do this to book out, it’s a small additional task to indicate when we plan to return. However action is taken if you don’t turn up as planned, so you must keep them informed of delays or changes to your plans. The airport remains open until 7:30pm Monday to Friday (but not currently weekends), providing more than enough contingency for delays after departure.

Since we wanted to make the most of the time available, an early start was planned. I had ensured the aircraft was fuelled up beforehand and ready to go. We were at the airport around 8:30, giving enough time to get the aircraft out from the hangar, pre-flight and recheck the weather. I could have arranged an earlier departure under indemnity, before the 8:30 runway inspection, but that would have made it an unreasonably early start.

Having flown the TB20 relatively infrequently, I found myself needing to take a little more time with the checklist and remind myself where everything was. It’s a relatively powerful and more capable aircraft compared to the PA28s I’ve recently been instructing in, and certainly faster. Aware that I might be entering cloud at 1000 feet added the need for a more cautious and meticulous approach.

Due to the cloud, there were relatively few movements that day and hardly anybody on frequency. I climbed up above the cloud without actually needing to pass through it where it was really quite pleasant en-route, between cloud layers, tracking almost to the Daventry VOR to keep well clear of controlled airspace. The tailwind shortened our flight time with a ground speed of 155 knots (about 180mph) – much better than being stuck on the M25 motorway. Brize Radar provided a traffic service (although there was very little), then I briefly had a Basic service from Cranfield (since I was passing close to their instrument approaches), then Cambridge.

Rather than use the autopilot, I hand flew this flight entirely for practice.

Cambridge ATC seemed a little surprised that I requested an instrument approach on arrival – I had been pre-booked as a VFR arrival when I called the day before. I thought it strange that they’d still expect VFR arrivals given the current weather conditions, and when I explained I was VFR on top they granted me the RNAV nonetheless.

I remembered only after capturing the final approach track that there is no glideslope indication for this approach. Perhaps it helped not to be using the autopilot, it certainly focusses the mind as we descended into the cloud around 1500 feet and we were down to about 750 feet before I positively identified the runway.

Tower ATC was excellent, warning a large helicopter downwind of my location and making him extend before following me in – he couldn’t see me visually but did have indication on his TCAS screen. Visibility was a lot worse above 500 feet during the approach than on the ground, perhaps explaining why ATC might have thought a VFR arrival would be reasonable. Technically perhaps so – VFR is valid down to 1500 metres – but I wouldn’t recommend those flight conditions if you can avoid them.

A headwind of around 20 knots enabled a fairly gentle touchdown at around 40 knots, well below the 52 knot stalling speed of the aircraft. A short groundroll and easy taxi to grass parking. It’s a short walk to the Aero Club where we were afforded a warm welcome. I tend to pay the landing fee and collect the departure booking out form on arrival, so as to expedite our departure later that day.

Video of the flight including ATC audio and commentary

So why doesn’t the LNAV indicate a glideslope at Cambridge?

A slight diversion to explain why the glide slope didn’t show up on my HSI. Skip this section if you aren’t interested!

Garmin navigation boxes automatically generate a virtual glideslope for these LNAV non-precision approaches, drawing a 3D path directly between the top of the glideslope at the Final Approach Fix to the runway. This is called LNAV+V. During the final approach it looks and feels very similar to an ILS, but doesn’t have the official stamp of approval after being formally checked, certified and signed off. The glideslope should be considered advisory and you should check altitudes at each mile with the approach plate as you continue your approach.

Aircraft can be fitted a barometric pressure input into the navigation unit, allowing it to track the glidepath based on atmospheric pressure rather than the artificial GPS derived glideslope. This is called LNAV/VNAV (or just LNAV/V).

When RNAV (also known as GPS) approaches were introduced, the CAA decided to differentiate RNAV approaches that were approved with LNAV/VNAV differently from those without. LNAV/VNAV approaches disable the LNAV+V glideslope for those not equipped with the extra barometric pressure input. So aircraft like mine, typically flown by private pilots have the glideslope forceably disabled.

Of course that’s not specifically noted on the approach plate anywhere, and it can be quite a surprise when the glideslope simply doesn’t appear. What you have to know is that if the plate shows minima for LNAV/VNAV then you won’t be seeing a glideslope. If LNAV/VNAV is absent, then a glideslope will be shown. It’s quite easy to overlook that curious scenario as I did, and I’ve been actively researching this area for some years.

Most of the affected airports are large commercial ones, such as Gatwick and Stansted. Of the handful that are more relevant for smaller GA traffic, perhaps four stand out – Jersey*, Guernsey*, Liverpool and Cambridge. All of these have ILS at both ends which could be used instead except Cambridge. This has only an ILS on runway 23. So there is only a non-precision, non-glideslope approach for 05.

*UPDATE: The following month, both Jersey and Guernsey RNAV approaches were upgraded to LPV.

What’s even more ludicrous is that the minima for the LNAV/VNAV at Cambridge is identical to that for the LNAV on its own. At most other airports, there is a 20 to 50 foot lower minima. This is regulatory madness!

I’m told it would only require the CAA to publish a one page Information Notice with a decision that allows Jeppessen to code these approaches differently, and this would enable Garmin and any other navigation equipment to display the glideslope.

It is hard to understand why the CAA continue to block safety improvements like this.

Return leg back to Gloucester

We took the bus into town – the park and ride service is frequent and there is a stop directly outside the Aero Club.

After a pleasant family day in the city, we again took the bus back to the airport. I just had to fill in the planned departure time in the booking out sheet, have it faxed to the tower, and walk out to the aircraft. A quick pre-flight and the usual procedures then airborne again.

Sunset was 17:36 GMT, with official night commencing 30 minutes later. We took off at 17:33 and landed at 18:21, so about half the flight qualified as night flying. I was current for night passengers anyway, but my IR rating also allows me to fly at night with passengers without recency.

It’s an interesting time of day to fly, watching the sun sink below the horizon, darkness gently descend and the ground lights become more distinct. Often the winds are calm at this time of day too.

Most of the flight was in VMC and it was only as we got close to Gloucester that we had to descend through a broken cloud layer during our approach.

I was pretty much positioned for a straight in approach, and made use of the RNAV via NIRMO – this time with a glideslope indicated. The flight was almost entirely flown under the autopilot (including the approach), as you can see from the GPS track log shown below.