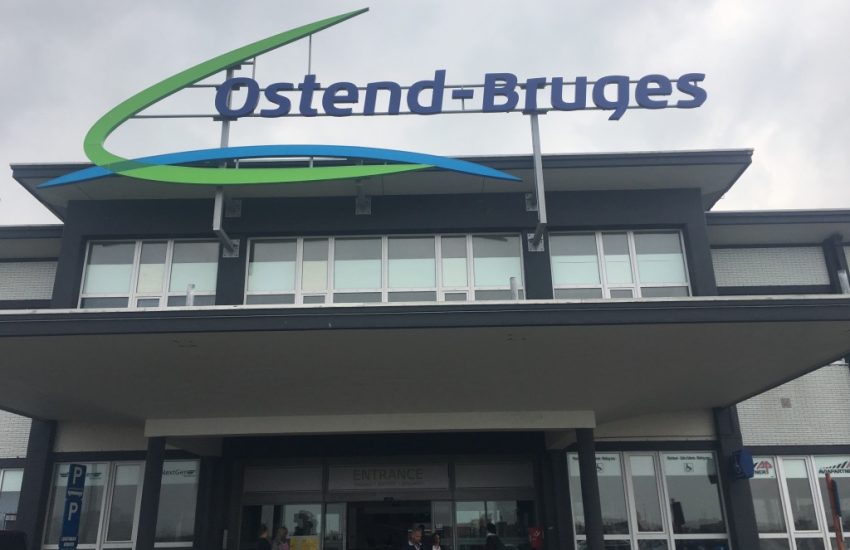 I had originally booked the TB20 G-CORB booked for the weekend to visit relatives, but plans changed and we ended up enjoying a weekend away in Brugge, Belgium. I filed IFR airways Gloucester to Ostend both ways using Autorouter intending to return after hours. Gloucester closes at 6pm local at weekends due to ATC staff shortages, so we obtained permission to land VFR before sunset on indemnity. GAR forms were filed as normal to satisfy immigration requirements. Ostend isn’t PPR and you can just file a flight plan and arrive – they are an airport and that’s what they’re for. A fully equipped international airport that isn’t too busy and doesn’t have excessive landing fees.

Temperature would be an issue – it was going to be cold, and that means avoiding icing. At FL100 it was around -17C but clear skies. The GRAMET report provides a useful horizontal depiction of cloud levels, temperatures and wind for your flight profile and is included in the free Autorouter briefing report.

The filed flight plan required us to route south west to BADIM to enter the airway, quite a detour after departing from runway 09. Our departure clearance was to climb initially to FL70 remaining outside controlled airspace. On reaching FL50 we were handed over to Bristol who act as the gateway into the airways. Almost immediately we were given a clearance to enter controlled airspace in the climb to FL100, turning 90 degrees left to a heading of 140. I could just peek at Kemble airport down below our left side

Thereafter it was headings all the way, refined by a few degrees initially to 100, then 090 then 085, 070 and back to 090. We were handed off across three London Control sectors, each time being asked to report our heading to the next controller. Once passed the busy London TMA I was expecting a direct-to Dover, but instead was given direct to KONAN. This is on the FIR boundary, on our flight plan route and about 2/3rd of the way across the channel.

We heard other airliners being vectored in and out of London airports, a few holding over Ockam on our right. We saw only a handful, less than half a dozen, despite being in the clear above the clouds. High level parachuting was active over Headcorn also right of track.

With still some 50 miles to go to KONAN and with the frequency fairly quiet, we were handed over to Ostend Control. At Fl100 I had managed to listen to Ostend ATIS and confirm they were using runway 08, expecting an ILS. With relatively little traffic, we were positioned on a 40 mile final, descending only when in Belgian airspace initially down to 3000ft. I could make this a gentle, controlled and smooth descent with the airfield in sight from many tens of miles away. Once within range, I was cleared for the approach and the tower also gave me an early landing clearance. Some crosswind, around 12-15 knots, which is common here, but a large runway so an easy touchdown.

Follow-me vehicle and marshalled into position. Once closed down, packed up and covers on, we were ferried across to the terminal. An intermediate stop at a building for a security scanner check, then through immigration.

There is a frequent (every 10 mins) bus service into town for 3 Euros. Frequent (3 per hour) trains to Brugge cost 5 Euro return. All very modern and comfortable. We strolled through the city towards our hotel, stopping for a crepe for late lunch.

About 4 million tourists visit the city annually, so there are plenty of cafes, museums, boat trips, horse carriage rides, the “Historium” heritage centre and an 83 metre belfry tower with 366 steps to climb for great views. Belgium produces over 1,400 varieties of beer, celebrated by the Wall of Beer (with associated glasses), and there’s even a Friet Museum that presumably explores the origins of the humble French Fry (or chips as we say in UK). Plus loads of chocolate shops, waffle shops and associated eateries.

I arrived back the airport in good time to allow for delays and we went upstairs to the excellent restaurant/cafe. There was a 737 charter being turned around, and I later heard there was an evacuation due to unidentified luggage which would have slowed things down. By the time we went through, they had to re-open security especially for us, but were quite friendly and efficient. We first went through scanner security, then immigration, then paid our fees at the airport office, then minibus out to the aircraft. I called for start about 10 minutes before filed departure time, and we took off almost exactly on schedule.

When calling for start-up, I was immediately given our departure clearance. Cleared to destination as filed and squawk code, which would be the KONAN 2S standard instrument departure. That changed as soon as we were taxi-ing, with a new squawk code allocated. I thought it very unlikely that we would fly the filed route, and expected vectors through the London TMA again. When airborne and talking to Ostend approach, we were given direct to Dover at FL100. About 6 minutes before we reached the FIR boundary, we were handed over to London who then vectored us on headings in a very similar reverse routing south of Heathrow.

London Control was quite helpful in trying to hand us off to another agency for our arrival. They weren’t aware Gloucester was closed, but did arrange for Brize Zone to provide a traffic service to us as we descended through the clouds back towards our destination. That was much appreciated – there were few other light aircraft flying around in the clouds early evening but it’s nice to know we would be aware of them.

Self-announcing our arrival at Gloucester, and flying a standard overhead approach for runway 09, there was only one other helicopter on frequency who landed about five minutes after us. I even remembered to close my flight plan.

A surprisingly straightforward IFR flight both ways, helped by good preparation and research, and benefitting from good clear conditions above the clouds both ways despite the cold temperatures.