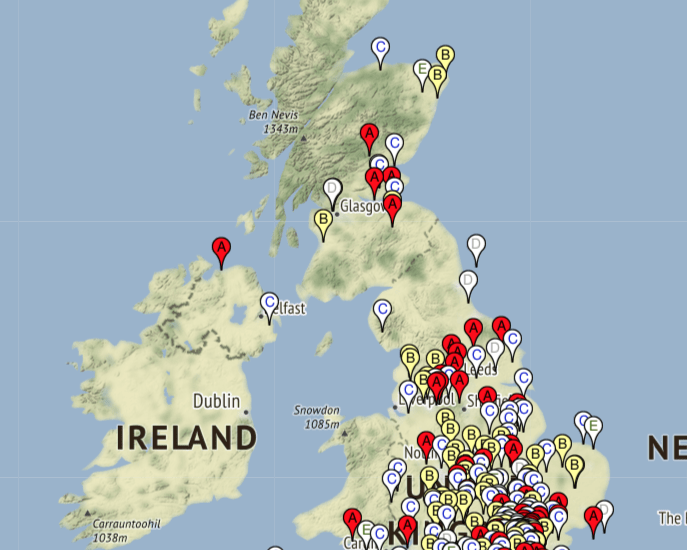 I got the chance to attend a monthly meeting of the UK Airprox board which I accepted. The board has offices and a permanent staff based at RAF Northolt in north east London. The meetings start at 9am promptly, so its either a very early start to drive there or staying overnight nearby.

The meeting room was the size of a small dance hall, with about thirty seats laid out roughly in a circle, each having a table top for papers and laptops. A very large screen projector was used to show the current topic under discussion.

A small table in the corner was set aside for Observers, and the Chairman and others made us welcome. It was clear we were there to watch but not contribute. The other Observer that day was a ex-Chinook pilot who had moved on to desk duties, and she clarified a few points for me about some of the military incidents.

The UK Airprox Board’s primary objective is to enhance air safety in the UK, in particular in respect of lessons to be learned and applied from Airprox occurrences reported within UK airspace.

An Airprox is a situation in which, in the opinion of a pilot or air traffic services personnel, the distance between aircraft as well as their relative positions and speed have been such that the safety of the aircraft involved may have been compromised.

Airprox reports are filed, researched by the permanent staff, and then reviewed by these monthly board meetings. Their findings and recommendations are published on the website and freely accessible. For that reason, many of the details are redacted (e.g. pilots are not mentioned by name).

The typical timescale from an Airprox report to publication is about six months. This meeting in February 2020 spent most of its time reviewing incidents from August 2019, possibly one of the busiest months of the year. That’s partly down to how long it takes to research and gather information about each incident. Board staff typically interview each participant (pilot, ATC, ground observers), obtain radar traces and GPS logging data before writing a detailed report.

With 30 participants, it seemed like almost every branch of aviation had some representation. Both military and civilian branches had their respective pilot and air traffic delegates, supplemented by officials from the CAA, NATS and other organisations.

During the discussions, I was quite impressed with the depth of knowledge about each airfield. There was extensive experience of anywhere from Enstone to Kinloss, Aberdeen to Newquay. Aircraft types ranged from paragliders to RAF fast jets.

On the whole, the meeting did observe the principles of “Just Culture” which seeks to find the underlying causes of problems, identifying consistent trends and making recommendations to mitigate them rather than simply apportion blame. Perhaps there was a little bit of defensive posturing from time to time, but on the whole everybody was aiming to arrive at an objective and fair assessment.

The Chairman, who was stepping down after this meeting, was very welcoming but explained that not everybody finds the meetings to their taste. He said he’d quite understand if I chose to disappear after lunchtime, by which time reviewing reports can start to blur into the next.

We covered about 30 incidents during the meetings, some covered quickly and others more extensively. The outcome was a tickbox list of issues relating to each incident, and most importantly a categorisation from A to E (Very serious to fairly trivial).

I’ll pick out just a few of specific incidents that are most worthy of attention.

[Report 2019256] On 24 August 2019, a DR400 pilot was landing at Enstone and when in the flare spotted a helicopter emerging from behind the hangar directly across his path. The go around involved ploughing through some long grass to the side of the runway before gaining climb airspeed, while the helicopter pulled back with nose high attitude. Both pilots claimed to have made blind radio calls beforehand but neither had heard the other.

[Report 2019253] On 29 August 2019, an AW109 civilian helicopter flew through the circuit pattern at Membury, underneath a C42 microlight flying in the circuit. This must have been quite frightening. My view is that while it’s easy to argue that the helicopter pilot should have remained clear of airfields while flying that low, the C42 would have been safer had it been fitted with an operational transponder.

[Report 2019238] The military representatives discussed this one at length – two typhoons on an exercise in Scotland. I learnt of a new term, MARSA, Military Authority Assumes Responsibility for Separation of Aircraft, whereby the military ATCOs handle their own aircraft even in civilian airspace. This one resulted from some confusion due to the aircraft involved in the mission being swapped around due to technical issues.

[Report 2019252 and 2019257] These are both highly relevant to me, the first involving one aircraft conducting IFR training approaches and in the hold with another VFR transitting through the overhead on a Basic Service. The second aircraft had reported initially at 1800ft but then climbed to 4,000 feet without informing the controller leading to a potential conflict with IFR aircraft in the hold at that level. Risk was classed as Medium because minimum separation was estimated to be at least 4.5 miles, perfectly adequate in Class G airspace.

The second report involved a DA42 flying the RNAV approach under control from Gloucester Approach and a C414 flying VFR with a traffic service from Brize. Glorious VFR conditions and great visibility.

Strangely, Brize did not call out the DA42 as conflicting traffic, and the C414 pilot thought the risk of collision as none vs the DA42 assessment of high. Radar recordings show a separation of 400 feet vertically and 0.1 mile horizontally.

The Board recommendation was for Gloucester to introduce their own conspicuity squawk code, so that Brize would have been aware that the DA42 was talking to Gloucester. Frankly, I can’t see how that would have affected this case at all – the Brize controller chose not to call out the traffic and this wouldn’t have been different regardless of the squawk code used.

Some members were aware of the very high R/T traffic levels at Gloucester, and I feel that adding the extra time to issue, acknowledge and cancel a separate squawk code would further exacerbate the situation. Perhaps if used only for those aircraft under procedural service there may be some benefit, but I could see some confusion and lengthy repetition with less frequent flyers during busy periods.

My own view is that the urgency for Gloucester ATC to have real-time access to a secondary radar feed on a screen becomes ever more evident. I understand that this hasn’t been possible in the past due to the high annual cost of the service from NATS (several £10Ks/year). The lack of reliable information leads to much longer R/T conversations, extended delays due to procedural separation, reduced capacity for instrument traffic and higher risk of Airprox such as this. I have heard the Airport is in discussion to arrange for this for both primary and secondary feeds, having finally recognised that their own radar is not viable long term, and can only hope that this is concluded quickly.

It was definitely worth a day out to see how this arm of the aircraft industry operates. The level of knowledge and expertise in the room was evident, th meeting was well prepared for, administered and chaired efficiently. While I might not agree with all the conclusions, the thoroughness of analysis and clarify of published information is exemplary.

Should you experience a close shave, then don’t be afraid to file your own Airprox report nor reply to an enquiry from the Board. They are there for safety, and do not have powers to prosecute pilots or suspend their licences.

The Airprox Board website has extensive reading material if you can’t sleep at nights. They also publish a highly digestible free online Annual Magazine – the 2019 edition has a good article on Electronic Conspicuity including the CAA’s view.

For those made of harder stuff, their Annual Reports, also known as Blue Books, contains detailed analysis of their findings and general trends. The latest available at the current time covers 2018.

I’ll leave you with a map of the Airproxes reported during 2019. Looks like the Scottish Islands, Northern Ireland and North/West Wales are the safest places to visit!