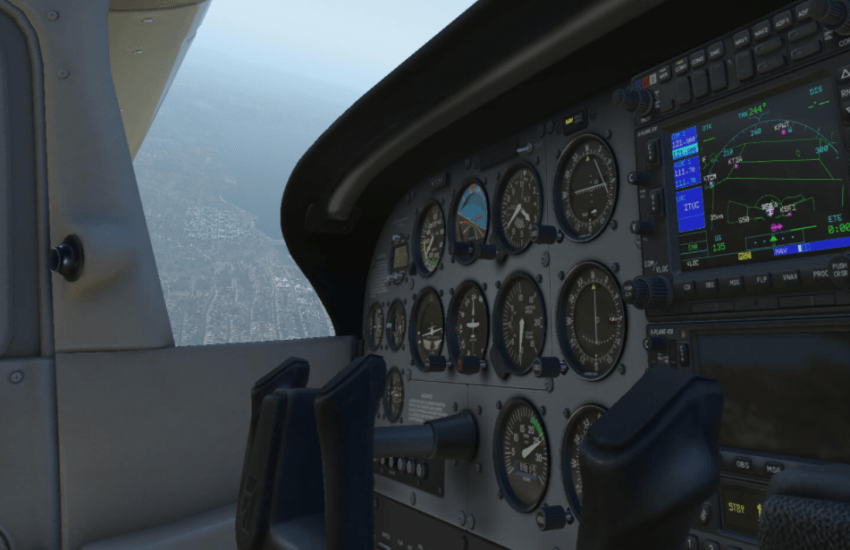 During this period of enforced downtime, I’ve been researching the options and capabilities of flight simulators. I’m a believer that wider use of Flight Simulators in the right context should allow students to progress more efficiently and effectively – reducing the flight time/cost to gain a licence or rating, reducing the elapsed time because it can be done in all weathers, and perhaps even increasing the scope and range of training by exposing scenarios that you wouldn’t normally fly in.

There is a huge contrast between the use of flight simulators in flight schools and clubs in the UK vs US. When visiting the US, I’ve seen these commonly available at flight schools and frequently in use. Full motion Redbird simulators are not uncommon, but more typically it will be a static device, sat in a separate room sometimes also fitted into a cockpit mockup.

Here in the UK, I did benefit from time on a Redbird simulator at Rate One – now residing at Bristol Airport and no longer holding CAA approval. I’ve also visited Anglian Flight Centre at Earl’s Colne and sat in their cockpit mockup. I recall seeing quite a good setup at Compton Abbas (no longer advertised on their website) and probably at one or two other airfields. The ATC Corps (Air Training Cadet) bought about 20 units for their own use, some with more success than others. But overall, the picture seems to be that few are available and even fewer are actively used for PPL training.

Of course commercial schools have sophisticated simulators. These are typically FNPT II (Flight Navigation and Procedure Trainer type 2) – the II being the more advanced type – developed by specialist vendors and costing up to £100,00 or more. There is a complex bureaucratic procedure to approve each installation individually (UK CAA fee £7,638), and this must be renewed annually (£1,723). The great benefit of an approved trainer is that the hours can be logged towards a rating and every other revalidation can be taken using one.

This huge cost of compliance contrasts strongly with the approach in the USA, where the FAA has generically approved a few specific models/configurations of standard training products and no specific/individual installation approval or annual revalidation is required by the user. You can acquire a brand new Basic Aviation Training Device (BATD) that is approved for use to retain Instrument currency for around $5K.

On the other hand, one of the major advances in EASA regulations lately has been the adoption of Competency Based ratings, such as the CB-IR and the soon to be available Basic Instrument Rating (BIR). These have no minimum hours, meaning that any form of training can be used to achieve the required standard. If you can do so by spending a lot of time on an unapproved simulator, then that should be much more cost effective. The minimum number of hours to gain a LAPL is also significantly fewer than for a full PPL (30 vs 45), although the scope of the syllabus is almost as wide, so again this offers the opportunity to reach the standard in minimum hours.

This would require quite a significant change in the mode of flight instruction in the UK. Most flight instructors aren’t in the trade to make money, and are either low hours commercial pilots looking to hour build or mature/retired commercial pilots looking to remain in the air and pass on their knowledge. Relatively few (my estimate from CAA data is 15%) are PPL only who have gained the FI rating apart from a few with the simpler CRI (Class Rating Instructor) qualification.

Pricing also remains a challenge. Compared to airborne flight instruction, time spent with an instructor on a flight simulator should be far more value for money. However, there is an underlying mentality that flight instructors should not charge (or not charge much for their time). Often ground school is provided free, and some suggest that flight simulator instruction time should also be at a lower rate than when airborne. Flight schools make a significant portion of their income from dual instruction flights and would not want their aircraft left on the ground rather than making money in the air.

So there is a question about whether the industry is ready to adopt more widespread use of flight simulators as Basic Aviation Training Devices within the PPL and IRR/IR syllabus. It isn’t purely about the capabilities or cost effectiveness of the latest products, but more about the attitude of instructors and flight school owners, the pricing and charging regime to recover investment and the engagement of flight instructors to make best use of this complementary capability. Behind the scenes, there will be an increased need for suitable IT skills and more structured training program to focus time spent on these devices.

But you have to start somewhere, so I’ve been investing time researching what is possible and suitable.