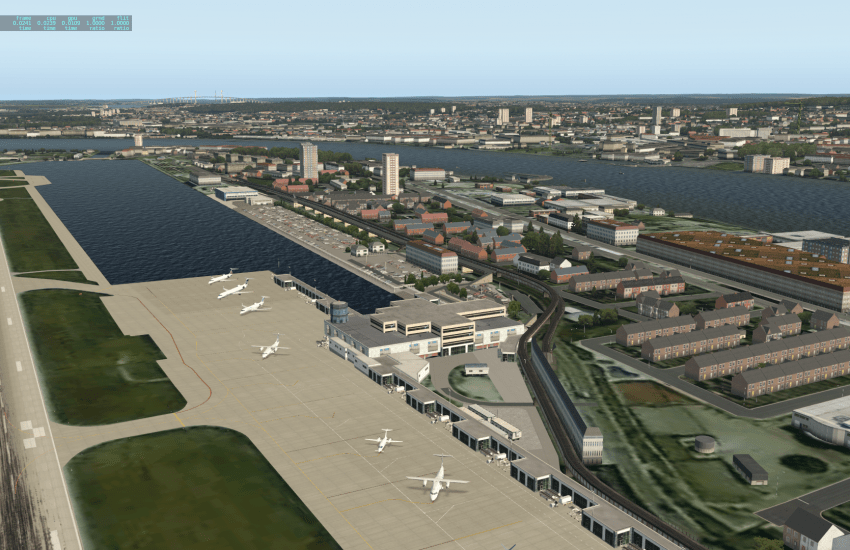 What quality and depth of scenery do you need when using a Flight Simulator for real-world flight training and currency? I’ve been investigating how to make use of X-Plane for my own currency as well as instructing at a club or flight school. I’m also adopting the term BATD (Basic Aviation Training Device) to distinguish my purpose from Flight Simulator more often associated with computer games, whether that’s the case or not.

The primary distinction is whether you are training for IFR vs VFR.

For IFR, you’re more interesting in looking at the dials and instruments, operating switches and navigation boxes. There may not be much to look at out the window, and even if there is you probably shouldn’t be doing that until very close to touchdown. It would appear that an average PC such as the one you use for work or home purposes, even your laptop, may suffice. The minimum you need to get started can be as little as a Joystick and the basic software, and you are probably better investing in more accurate instrument panel and navigation databases. However, detailed airport layouts will help familiarise with taxi routes and what to expect after landing.

VFR, and that includes the transition from IFR, benefits greatly from good graphics and an accurate representation of the terrain and airports that you fly over and into. The latest ortho terrain graphics, made from real-world photographic images from satellites and survey aircraft, is incredibly realistic. In addition, thousands of airports have been hand-modelled to illustrate buildings in 3D, making the visual approaches match the real world. Complex airports with many taxiways, parking stands etc, with detailed modelling provide an accurate impression of where to go and what signage you will see. Combined with wrap-around screens, or viewing aids such as Track IR, it becomes immersive. The logical next step for many will be VR (Virtual Reality) although I don’t see that being so useful for BATD purposes myself yet, due to the limits of display resolution for instruments.

The big downside with accurate and detailed scenery is the much longer time to load/start each flight which can stretch into minutes.

X-Plane has built-in scenery in one folder which you managed through the Installation program. You can download scenery for each region of the world – the downloads are very large (10s of Gbytes) and expand into 100’s of Gbytes of disk space. If you have a fast Solid State Disk (SSD), you’ll ideally want all of it on that rather than a slower mechanical Hard Disk, but you can choose. The penalty is longer loading times before you start each new flight.

Examples load times (from selecting a flight to being ready to fly) using X-plane 11.4

There’s a separate Custom Scenery directory which holds any third party add-ons, including free open-source and anything you develop or customise yourself. To install new scenery, just copy it into this folder and the program will scan and find it next time. There’s a text configuration file which you can edit to disable or choose between multiple options, but I found it worthwhile to buy a copy of xOrganiser which provides a simple user interface to select and switch between different profiles. For example, an IFR profile would offer low graphics but fast loading/startup times, while a VFR profile has the opposite.

The scenery configuration file in the Custom Scenery folder also sets the priority of each scenery pack. The hierarchy is:

I’ll discuss each of these in reverse sequence.

The program comes with terrain and airport scenery for the world, although it’s fair to say that the most detailed is for North America and Western Europe. There are a dozen extremely detailed landmarks and large airports with extremely accurate detailing – fly over London into London Heathrow, down the Hudson and into one of New York’s airports, or overhead Los Angeles. Further afield, it won’t take much to realise that the level of detail isn’t so comprehensive, but generally speaking you’ll find most commercial airports listed and runways shown. The number of buildings shown will depend on the graphics settings and capabilities of your computer.

I’ve supplemented the built-in terrain scenery with a commercial product from Orbx called True Earth, which really brings the countryside to life. You can now use this to navigate visually cross-country, easily identifying roads (which have traffic driving on the correct side of the road!), railways, rivers, towns and cities. Some of the landmarks are a little tricky to spot (eg the Membury Radio Mast on the M4), others very easy (the Severn Estuary road bridges). Orbx provide their own installation program (Orbx Central) through which you download their products, and can choose which directories each one resides in. I’ve put the most common regions on my SSD and the less commonly flown on the HD.

These comparison screenshots below don’t really do justice to the improvement, which shows up very noticeably on larger monitors.

A popular competing solution, which I haven’t really explored, include Ortho4XP, which is a free Opensource option that also seems to allow you to generate your own from mapping services such as Bing. There are also other commercial products available at different price points and resolution detail.

There are a few plug-ins that seem to make certain landscapes and features look better. Specifically vegetation, such as forests and trees, can be much more realistic than with the basic programs. While you can get carried away with these in the search for perfection, I did install a couple of free Orbx modules. Neither seem to have caused a performance hit.

I think it’s worth spending time getting the airport (or airports) you fly most frequently from as accurately modelled as possible. This includes everything from the positioning of the taxiways, line markings, signage to the buildings. The default for many airports is auto-generated from aviation databases, so you’ll generally find the runways are depicted at the correct orientation and position, equipped with ILS and other navaids. Other features will vary widely from almost none to incredibly accurate detailing.

Anyone can download and edit any airport in the X-Plane system. A free program called WED (World Editor) is provided to do so. Many have done that, and uploaded their enhancements to the Scenery Gateway for anyone else to use. These are reviewed and if up to standard and incorporated into the next major release. So if your airport isn’t very detailed, the first place to look is the X-plane scenery gateway to find a more recent version. Theres a very useful global map showing all airports and the status of their scenery here.

If you want to develop a new hobby, then you can watch an extensive video tutorial series (about 20 videos of up to an hour each) and learn how to do this properly. The ground layouts (surfaces, line markings, signage etc.) are comprehensive and as much as you will ever need. However for copyright reasons, X-Plane have limited their own scenery to use only their own models of buildings, which isn’t very extensive. You can contribute to the wider community by updating the model of your local airport(s) and uploading to the Scenery Gateway. Your submission will be incorporated into the next release of the software if it passes a quality control check.

The next step is to make use of third party scenery libraries, selecting from a very wide range of pre-fabricated buildings and other objects (vehicles, cargo containers, lights etc.), and add those in. Again there are popular Opensource libraries available – OpenSceneryX being the most common and extensive. Download that library to your Custom Scenery folder and you can make use of any airport model that references it. It’s worth searching the X-plane scenery packages forum to see if anyone has developed and uploaded their own model of your chosen airport(s), since these won’t appear in the standard product or Scenery Gateway. Beware there’s no quality control so there might be some mistakes, and some third party libraries are probably required.

For those with the most time and skill, you can develop your own 3D models using Free tools such as Blender and Sketchup. These are very powerful and complex modelling tools, for which the limit is only your imagination (you can even animate cartoons in Blender), and so take a correspondingly long time to learn and use effectively. Watch the BlenderGuru Youtube channel if you are really keen. If you have good photos of any building, you can texture walls, gutters and doors to match the real world.

Commercial artists use all of the above techniques to create excellent high quality models of airports, and you’ll find these available for relatively low cost each. The amount of detailed work that goes into many of these airport models is quite remarkable, both for free and commercial options, and makes the experience ever more immersive and realistic.

In summary, you can sometimes find more recent and better developed models of specific airports by searching on the X-plane scenery gateway, scenery forums or look for commercial add-ons.

One point worth noting is that any of the above Airport models, including those built-in to X-plane, will also cater for moving vehicles. These include service trucks, such as fuel, baggage handling and crew cars on the ground. The system can also fly aircraft in and out of airports automatically, using it built-in Artificial Intelligence, with service trucks visiting after they park up on the stands. It gives an airport a sense of background activity that I expect is useful even in the training environment. All of that behaviour on the ground is modelled within the airport scenery packs, such as which taxi-routes are taken by aircraft, so fairly easily updated or changed to suit where required.

For IFR, you might well just stick with the built-in mesh scenery that comes with X-Plane. It’s definitely worth spending a little time downloading custom scenery for your home airport and those you might practice at – search on the X-Plane Scenery Forum and for commercial products.

For VFR, it’s definitely worth investing in good Terrain either through a commercial product or open source download. These give a much improved perspective and impression of what it’s like at 3000 feet and when approaching a new airport.

Beware that loading times can become greatly extended as you add more libraries to your system. Using xOrganiser can help switch between fast/slow loading profiles to suit your needs on different days.

Next up, I’ll look at the performance hit measured after installing lots of third party add-ons and also the upcoming 11.5 X-plane release which greatly optimises graphics performance.