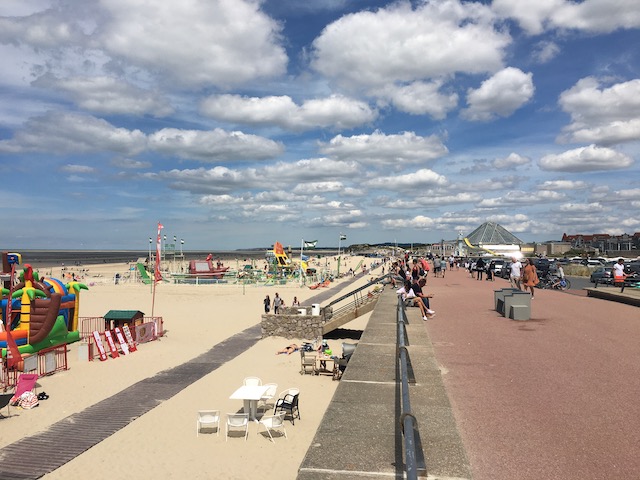 Regulations in both UK and France are constantly changing and already differ from the date of this flight, so please check the current status before you plan to fly.

Relaxation of COVID-19 restrictions now permit international travel, with no requirement for self-isolation on return from over 50 countries. Private pilots can once again fly to and from European countries for daytrips or longer excursions. I believe that the main limitation at present is that passengers must be from your own household although flight instruction for private pilots is also possible.

I thought I’d find out for myself by flying from Gloucester to Le Touquet in my TB20 for a daytrip. This would be solo because none from my household wanted to join me – I think they would have wanted to spend much more time on the beach. I opted to fly the outbound leg IFR airways, largely because I was out of practice with an airways flight, and return VFR navigating around the new Farnborough airspace. The weather was benign due to a high pressure centred over England, with very little wind and just a thin layer of cloud around 4,000 feet.

As for any foreign trip like this, I filed flight plans both ways, emailed my details to French Customs and submitted a GAR form to the UK Border Force for my return.

My research indicated two or three additional forms would be required. The UK Government Border Force require a declaration from all arriving passengers indicating which countries they’ve been in during the previous 14 days and where they will reside on arrival. The purpose of the form appears to enable the government to inform me if anyone else on the same flight was diagnosed with the virus. Since I was flying solo, I thought that unlikely. Passengers on private flights are limited to your own household, which makes it redundant.

The online form itself is fairly straightforward to complete but does seem to require quite a lot of detailed information including for everyone exempted from 14 day quarantine. Aimed at airline passengers, it probably took about 10 minutes to fill in completely, even requiring my seat number (that’s got to be 1A). I heard of other private pilots met on return by Border Force agents who insisted that the form was completed online before anyone left the aircraft. Failure to complete the form would attract a fine starting at £100.

There’s also a NOTAM stating a requirement for “Carriers” to send a General Aviation Declaration form to Public Health Englands Public Health Control Unit at Heathrow, although I don’t view myself as an airline or Air Carrier in this context. The guidance and forms required are far from clear and will hopefully become clearer in the month ahead. One pilot called the PHE number and was told that forms are required even for private flights.

The French Interior Ministry requires that visitors complete an “Attestation” – a signed declaration that you aren’t suffering from any COVID-19 symptoms – which you can present on request.

My departure clearance came through promptly, with the usual routing towards BADIM, handover to Bristol Radar and clearance to enter controlled airspace in the climb to FL100. There was an early turn to the east when still in the climb, and I was asked for my requested altitude. I opted for FL120 which I thought would keep me clear of much of the lower level London TMA traffic and thus more likely to achieve a direct routing.

You can rarely tell how large the geographic areas are that each airway controller covers – sectors are split as the amount of traffic grows so that each controller has a reasonable number of aircraft to handle. I think I was between Swindon and Reading when I heard my sector controller handing off traffic to Newquay, suggesting that lower levels of traffic were indeed resulting in fewer controllers on duty. Much of my routing until past Gatwick was on radar headings, giving me great views of Farnborough and Gatwick itself. There was a thin layer of cloud below me, and I didn’t see any of the other airliners on frequency throughout the flight.

I was given an initial descent to FL110 when coasting out over Dover and then handed across to Lille Approach who gave a further descent to FL60. I had already managed to pickup the Le Touquet ATIS by then, so I was ready when asked what type of approach was required. I could have opted for a visual but took the opportunity to fly the RNAV 31 procedure. A further descent clearance down to 2,000 feet was accompanied by an early clearance for the approach itself.

The handover to the tower controller was smooth and straightforward, simply asking me to report 4 mile final. I could hear other aircraft approaching VFR, and being cleared to land ahead of me. Hearing that the ground frequency was in use – in France labelled as SOL – I ensured that was tuned in on standby.

Low level turbulence encountered nearer the ground was quite a contrast to the relative calm and smooth air at FL120. A cross-wind of around 10 knots combined with thermals from the heat of the day led to a much more bouncy ride. The IFR approach did add a number of track miles to the flight but effectively led to an 8 mile final that was easy to track down to touchdown.

The airport was as busy as I have ever seen it, with rows and rows of parked aircraft. It looked like many had been waiting for the relaxation to arrive. It wasn’t just Brits – I heard one pilot fly in from Texel in the Netherlands, as well as French aircraft.

Immigration formalities seemed to take a little longer than usual – something not quite right on the computer – but there was no need to produce my “attestation” document. The friendly airport staff at the counter were able to take my landing fee by contactless card and would have re-fueled while I was in town if asked. Bicycles were also available to hire as usual. The airport restaurant was open and I was warned it was busy in the town itself.

Since it was a lovely sunny day, I chose to walk into the town. Le Touquet is a very attractive destination, with lots of tree lined avenues, well kept houses and active family holiday makers. The town itself was remarkably busy – it felt just like any other busy summer holiday period – and there were queues outside most of the restaurants often five or six tables worth. The shops were all open with everybody wearing masks inside as required. Perhaps 30% of people wore them outside.

It was only when I wanted to buy something that I realised I’d forgotten bring any Euros. So many shops accept contactless cards these days, even for ice-cream/sandwich/coffee, that this no longer poses a problem.

The beach was quite busy with many activities from kite-boarding, sailing, canoeing to swimming. The shore breeze moderated the warm sunshine. I walked around the town and visited one or two areas I’d not seen before. There is some new building construction in the main town centre which shows the town continues to thrive.

My return to the airport was in good time for an on schedule departure. I like to keep my watch on UK time because it’s quite easy to get confused between UTC, BST and ECT and ignore my phone which had switched automatically to French time.

There was no departure clearance or special instructions prior to take-off other than a squawk code. There was a 10 knot crosswind and it was simply a case of navigating towards the Seaford VOR. Despite climbing briskly into the Class E airspace above the TMA, the tower simply instructed me to squawk 7000 and freecall London Information. I was up at 4,500 feet before crossing the FIR boundary and making contact.

As usual, London Information was bandboxed so everyone could hear aircraft in the Wash, Wales as well as in the Channel. For a sunny Sunday afternoon in July, there were remarkably few aircraft on frequency but still enough. I stayed at 4,500 feet (an allocated altitude for VFR westward flight) and was pleasantly surprised I could continue without penetrating either London or the new Farnborough airspace (which is Class E between 4,500 and 5,500) by routing north west from Goodwood keeping two miles east of Southampton.

VFR waypoints such as Butser Hill Mast are very hard to spot from this altitude and tablet charting applications such as SkyDemon really make navigating through this complex airspace much easier than before. I came close to a couple of gliders at this altitude, not dangerously so but definitely a late spot.

I monitored Brize while I routed overhead Fairford, then contacted Gloucester from about 15 miles out for a VFR arrival. An overhead join was converted to a deadside crosswind join when I reported 3 miles out and I positioned behind a PA-28 in the circuit doing touch and goes. The faster speed of the TB20 means it is far too easy to catch up other aircraft in the circuit. Early gear deployment helps but perhaps I did let myself get a little too close. The controller advised I would receive a late landing clearance, and did make this a Land After when I was around 200 feet.

Perhaps surprisingly, the return flight was slightly shorter than the outbound leg despite appearing to be a less direct route. Factors affecting that would include the time taken to climb/descend the extra 6,000 feet and fly the full instrument approach at Le Touquet.

There was no welcome party from Border Force on my return. My form filling must have been up to standard. There was definitely some blood on the leading edges when I cleaned the bugs off the wings and tailplane. Mosquitoes must be flying higher these days.