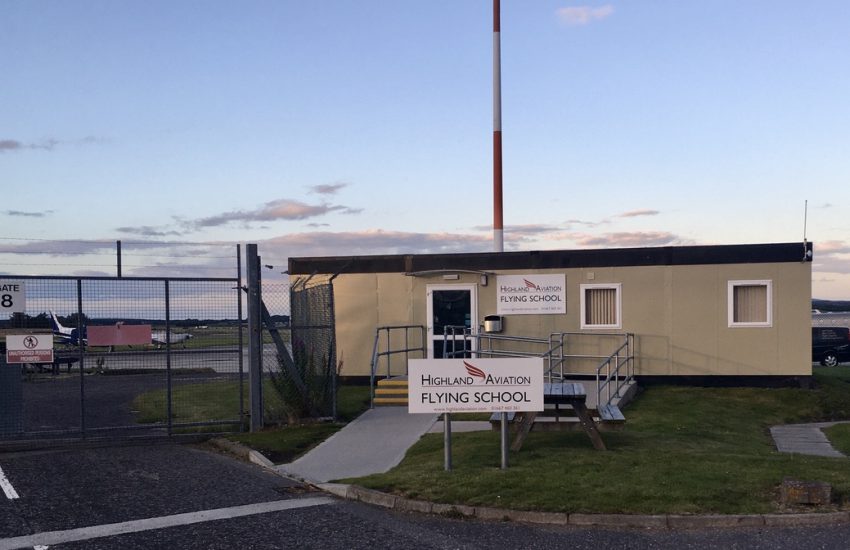 With quarantines being imposed at short notice, holidays in the UK seem to be a popular option at the moment. Some may think it best to stay at home while others want to support the hospitality industry within government guidelines. My own plan this week was to combine a trip to Scotland with some flight instruction away from base. It takes most of a full day to get there and another to return, so it’s best if you can make it at least five days to see more of the area. There’s plenty of weather up there – strong winds, rain, cloud and sunshine – you can experience all four seasons in a single day.

Today’s flight was in my TB20 from Gloucester to Inverness. The weather looked favourable but there was a strong wind warning. I wanted to break the journey about half way and refuel, partly to make it more relaxing and partly because fuel prices are considerably higher in the Highlands. Cumbernauld looked like a good option, but they are NOTAM’d as PPR only by telephone and I couldn’t get through or a callback despite trying twice. Carlisle, which has had a huge investment in recent years, remains closed for a further two weeks. Edinburgh and Glasgow are extremely expensive for GA. Prestwick might have been an option but I believe is also more pricey.

Instead I opted for Kirkbride, about 10 miles west of Carlisle, with a long hard runway and wide open land surrounding. My phone call was returned with the warning that the weather was a poor – (unofficial) winds around 20 knots and a cloudbase around 1,500 feet.

I filed IFR using Autorouter with an almost direct routing at FL100 overhead Manchester, routing via STAFA, POL and ERGAB.

Gloucester was reasonably busy – a constant flow of traffic but not manic, and operating with split tower/approach frequencies. The previous day had poor weather, so everyone was making the best of the rest of the weekend. After refuelling and completing my checks, I requested my IFR departure clearance.

The transition into airways wasn’t quite as slick as normal. There wasn’t the unique IFR squawk code issued on the ground and the initial routing was ontrack STAFA but only to FL60 remaining outside controlled airspace. Once passing FL40, I would have expected to be handed over to Western Radar sector who manage the clearance into controlled airspace (and provide a traffic service above about FL60). That station wasn’t manned, so instead I was told to contact London Information for my airway clearance.

I often think of the hard-working staff manning that station, tucked away in a broom cupboard at the back of the Swanwick ATC centre, who have to handle everything from the first-time student solo navex (he listed every turning point in full detail) to those asking for Danger Area status and others like me seeking to co-ordinate with airways controllers or activate their flight plans. There was a standby you are number 1, a long pause, and then a “Pass Your Message”. I’d guess that the IFR airway system wasn’t ready to accept my flight, and it took some minutes and a phone call behind the scenes before a clearance was forthcoming.

Meanwhile, I was staring at a rather unpleasant clump of cloud dead ahead that I would have loved to simply climb above. Too late – light turbulence inside but I was still well below freezing level so no icing concerns. Cleared into controlled airspace climbing FL100 ontrack STAFA. The clearance was “in the climb” rather than “level” at FL100. But I was asked if I could make FL100 by STAFA. With 30 miles to go that wasn’t going to be a problem and in fact I made it before even entering controlled airspace.

Once talking to Scottish Control who accepted me a few miles before controlled airspace, the controller asked for my requested routing. Learning from my previous IFR flight, I stated exactly what I wanted on the basis that if you don’t ask, you don’t get. “Direct to destination at FL100 please”. The route flown was pretty close to that remaining at FL100 with initial routing via STAFA.

With fewer aircraft in the skies, there are definitely fewer controllers working at ATC and each had a larger geographic area to cover. I was surprised to be kept on the same frequency throughout my transit over the Manchester area. Once clear, I was told I’d be leaving controlled airspace in a few miles and to squawk conspicuity and contact London Information. The relatively new term “Squawk Conspicuity” means either 7000 or 2000 depending on VFR or IFR (at the pilot’s discretion), so 2000 it was.

My SkyDemon chart conflicted with ATC, indicating that I would remain in controlled airspace at this altitude. Fortunately I recalled my previous airways flight which had similarly caught me out. Airway N601 has a variable lower limit, from FL95 to FL125 depending on the time of day and day of week. SkyDemon doesn’t currently cope with that (surely this must be a pretty unique UK quirk), but it did mean I wasn’t exactly sure when I left Class A airspace. A descent ensured I was well clear.

On first contact, London Information strongly declined to give me any service while I was inside controlled airspace, so I was in a bit of a limbo-land for a couple of minutes before I called back and got a basic service. There’s really not much controlled airspace north of the Liverpool/Manchester zone until you get to Scotland. I held at FL80 to remain above the cloud and found that even in the clear it was a little turbulent at times.

The descent down into Kirkbride meant going through patches of broken cloud providing glimpses of the ground below with a little turbulence at times. At 500 feet per minute and 120 knots, you need at least 4 miles per 1,000 feet. So at FL80 I needed to think about descending with at least 32 miles to run.

The highest ground in the Lake District goes up above 3,000 feet, so I remained above 4,500 until well clear to the east of the field. Kirkbride Air/Ground came back immediately on first contact with runway and pressure setting, and also provided an unofficial wind estimate on request of 20 knots about 20-30 degrees off the runway. There was no other known traffic to affect a straight-in approach. My intercept was a little high (or you could say just too close into the airfield), which was resolved with some slideslip. The wind was quite gusty but mostly down the runway, and it was easy to make the turnoff at the half-way mark.

There was a friendly reception committee who helped re-fuel and push the aircraft to a parking slot. A Robin took off for a few circuits but otherwise I saw no other traffic that day. With Carlisle closed, they’ve been quite busy refuelling visiting aircraft and helicopters. There are a few based fixed wing aircraft there plus a gyroplane school. The field was a busy wartime engineering centre in its heyday and I was shown an aerial picture of it in 1946 stacked full of aircraft for disposal.

On departure I spoke first to Scottish Information, just after I’d crossed the border about 10 miles north of Kirkbride. I was already in IMC by then and they quickly put me on to Scottish Control. Once again, state your requested routing for a transit. There is a GPS waypoint called LANAK that’s mid-way between Glasgow and Edinburgh, with the base of controlled airspace (Glasgow CTA) at 3,000 feet. I asked to transit at FL80 routing LANAK and then direct Inverness. Whether this is normally feasible or not I don’t know, but after a moment’s consideration this was approved.

I was inside a block of cloud for most of that transit but mostly back into sunshine thereafter. Scottish Control continued to provide a traffic service until handover to Inverness Radar, who provided a vectored ILS behind a commercial flight. Once out of the clouds, I did wonder if the extra track miles were really needed, but the winds were quite gusty and this made for a much more controlled approach and landing. Running through my checks as normal, rusty pilot syndrome meant I made the classic error on the GPS box by leaving it in GPS rather than VLOC mode despite actively identifying the ILS itself.

The tower cleared me to land while still several miles out allowing me to focus on the gusty wind conditions, leading to a fairly smooth touchdown.

Highland Aviation, the local flying school, now handle all small aircraft at the airport and have their office at the edge of the north apron. They’ve even got their own AVGAS fuel bowser supplying visitors on request. This is much better than when I previously visited, when they were located landside about half a mile away. One of their staff walked out to welcome me, helped pushback to a parking spot and politely reminded me that yellow jackets are mandatory on the apron. A few details for the paperwork and we were done.

One of the instructors kindly drove me and my luggage around to the brand new airport hotel which is within easy walking distance. The club uniquely offer a course in beach landings, including at Barra and elsewhere. Why not fly in on EasyJet, stay at the airport hotel and spend a few days flying around the Highlands and Islands with a local instructor. It must be quite an unusual and exciting experience. Just bring warm clothes!

Marriot opened up a brand new airport hotel right in the middle of lockdown. When I phoned to check they were open for visitors, they were extremely keen for me to stay. There are half-price deals at the moment which make it very attractive, and I can imagine it isn’t very busy. It certainly felt pristine although there isn’t much else to do in the vicinity. You can’t even enter the airport terminal unless you are travelling.

Tomorrow it’s going to be my first trip to the Orkneys. Can’t wait.