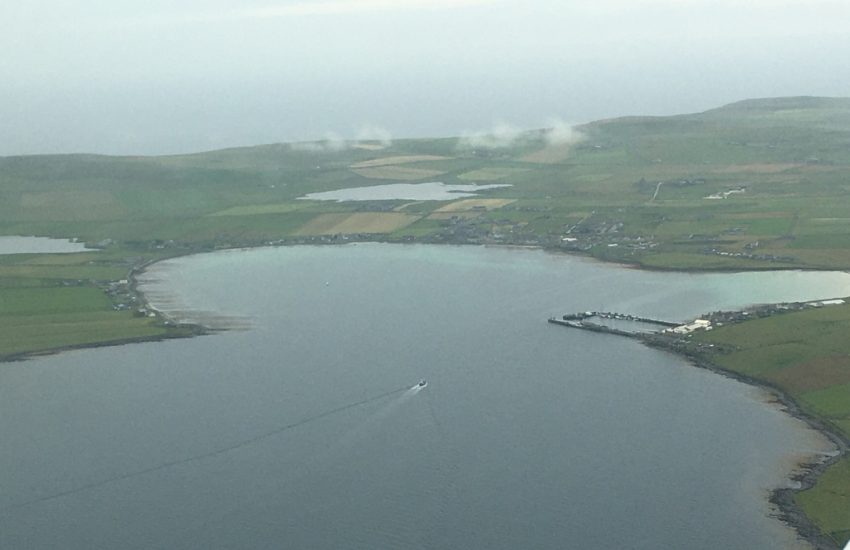 Almost five hours logged today in my student’s Cessna 182, flown north from Inverness to Kirkwall for some holds and practice approaches followed by serious VFR island hopping around the Orkneys. There’s always plenty of weather in Scotland and today was no exception, but north of Inverness looked (and was) far better. Rain was forecast to arrive mid afternoon and we had originally planned to stay overnight on one of the islands. Forecast gales in excess of 45 knots the following day put paid to that idea.

Kirkwall has almost every conceivable type of instrument approach, from the old fashioned NDB, the rarer VOR to the more common ILS and more recent RNAV. Since there are no radar services at any airfields between Inverness and Shetland Islands, it’s either a procedural or Basic service. We were able to remain on a Basic throughout, staying well clear of and not impinging on any of the commercial services currently running on a reduced rate.

Kirkwall Airport itself remained open but was deserted. Highlands ands Islands Airport Ltd (HIAL) which operates all of the airports in this region run their operation along what seem like military lines. We were challenged by a member of local staff who asked to see our airside passes as we walked from our plane to the terminal. Clearly, having just landed in a small aircraft we didn’t have any. You’ll be glad to know that we did each get a piece of card issued when paying our landing fee to show on request during our the 200m walk back to the plane.

“Packing a piece” has quite a different connotation in Scotland than in America. Rather than a weapon, it relates to lunch snack (although in some cases perhaps they could be classed as offensive weapons). My hotel kindly provided me with a hobbit-style second breakfast, since they were only providing a grab-and-go option anyway. That was just as well, since the airport cafe is open only for three hours a day from 8am during its quiet period. It was almost deserted inside and we wore face masks as is legally required except when eating.

Our afternoon’s flight had taken considerable effort to organise. My understanding is that HIAL require you to estimate your landing time at each airfield and notify them in advance for permission. There are indemnity forms to be signed and documents to be provided beforehand. You must avoid movements for 15 minutes before and after any commercial flight, although it isn’t entirely straightforward to figure out exactly when those are. In addition to head office, pilots must telephone the local contact on each island and check there are no issues. Changes in times, delays etc, require a further phone call. All airfields are unmanned outside commercial flight times.

It seemed to me that all the airfields were in excellent condition, with new runway surfaces – described as graded hardcore but seemed more like a sort of high grip tarmac that had very few loose chippings, turning circles, good drainage, very clearly marked signage and painted lines. Perhaps one or two windsocks had seen better days but it is often pretty windy up there. Light aircraft parking areas were clearly marked and the grass looked freshly mown. The magic number for runway length seemed to be 527 metres for quite a few of them, with LDA (Landing Distance Available) sometimes shorter and presumably relates to Islander aircraft performance. The AIP warns light aircraft of potential loose chippings and advises power checks on the apron areas. There were several shorter grass runways but with a warning that they become soft during prolonged wet periods.

We remained on the Kirkwall frequency throughout and advised them of our progress. Sometimes they were reachable when on the ground but mostly it involved reporting when airborne and again on final before landing.

The world’s shortest scheduled commercial flight is between Papa Westray and Westray with a flight time of around 2 minutes. It reminded my of my commuting days in London, where I could almost see the next underground station platform between Northfields and South Ealing. In this case you can not only see the other airfield but even make out the windsock. Sadly, the south-easterly wind wasn’t favourable to take the shortest route and we had to fly downwind and land almost doubling the flight time to 4 minutes. It did look good on SkyDemon though!

The Cessna 182 is ideal for this kind of flight, and landings improved each time with more accurate approach speed and angle. A hotel owner at Westray where we had hoped to stay explained that while they are open, restaurant capacity has been halved due to social distancing requirements (from 8 tables to 4), and they have compensated to some extent by cooking hundreds of take-away pizzas. It must be financially tough for those dependent on the tourist industry during these difficult times.

The return to Inverness involved some IMC and it became much wetter as we got close. There wasn’t much wind but the rain was quite persistent as we open the doors. We’d certainly gone to the best place for weather today but also made the right decision to return before the onset of gale force winds.