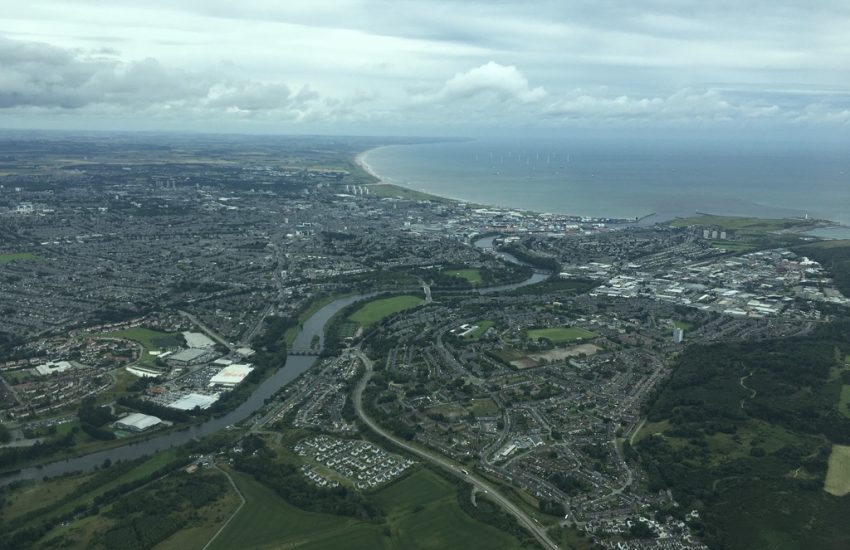 The forecast for the day certainly was for strong winds, with a SIGMET warning covering the Highland region. Definitely a good decision not to stay in Orkney overnight. Reviewing the forecast, I thought it feasible to fly a triangle across to Aberdeen, down to Dundee and back to Inverness. We had more than enough fuel onboard not to need to land elsewhere, although I did intend to stop for lunch in Dundee, and there is the choice of two runways at Inverness in case of strong crosswinds on our return.

Highland Aviation was busy, and I couldn’t help overhear an excellent student briefing for IMC training. I’ve been really impressed with the attitude, standards and operation of this outfit and wish them well in the future.

Our flight down to Aberdeen was fairly quick given the tailwind and the vectored ILS demanded a lot of concentration given the crosswind and increasing turbulence as we descended. It would have been tricky to land and outside the demonstrated crosswind limits of the Cessna.

The ILS/DME equipment was not operational, but there is a second DME located some 7 miles north of the airfield that can be used instead – it’s even marked on the approach plate. We flew the approach into 34, so the DME distance was just 7 miles too large. However on the reciprocal approach for runway 16, that DME would be increasing in distance as you approach the threshold which must be a little disconcerting. This isn’t the only ILS or DME I’ve seen unserviceable lately and I couldn’t help thinking how shocking it is that such a major airport doesn’t have an RNAV approach in place as alternative.

Subsequent research uncovered a complex Airspace Change Proposal (ACP) to introduce RNAV instrument approaches to the airport. The very high level of bureaucracy and complex planning procedures make this very expensive and time consuming. The list of organisations that have to be consulted (including many who really aren’t interested) is extensive. As a consequence of the demise of FlyBe and COVID-19, this ACP was paused in April 2020.

Scottish Control picked us up for this leg, flown outside controlled airspace at FL60, and passed us on to Leuchars who co-ordinated our requested RNAV approach into Dundee. I was pleased to find that we were allowed to fly the approach – when it was first introduced there was some hesitancy about making it available for non-commercial use. It is outside controlled airspace with Dundee Tower operating ATC without Radar, hence a Basic or Procedural service with Leuchars nearby providing the radar LARS service.

Nonetheless, there were a few slight surprises. I’m sure Leuchars relayed Dundee’s permission to fly the RNAV using the phrase “approved” rather than “cleared”. We routed as planned via the UVGOB initial approach fix. Unlike many RNAV approaches, this one doesn’t have a traditional T shaped set of initial approach fixes because of a Danger Area to the north.

Given the straight-in approach track, I might have expected the GPS box to annunciate LPV after passing UVGOB but it firmly remained in TERM mode until passing the intermediate fix PN27I. These intermediate and final fixes have five letter names comprising the airport ID (EGPN = Dundee), runway number (09 or 27) and type of waypoint (I = Intermediate, F = Final Approach Fix). You can only navigate to them as part of an approach procedure – Direct To functions won’t work for them as they do with the Initial Approach Fixes.

While there is a DME at Dundee for the ILS 09, it’s not required when flying the RNAV and so position reports are best made using the GPS. It’s important to realise that these always relate to the next waypoint, such as the IAP, IF, FAF or runway and should be reported as such.

I had a great view of the Tay road and rail bridges and the airport well before the FAF, and could spot Tayside Aviation training aircraft in the circuit ahead of us. We were cleared to land in good time with a wind of 25 knots straight down the runway. The landing roll was short and we easily made the Charlie taxiway turnoff.

Tayside Aviation is a highly regarded commercial pilot training organisation and seemed pretty busy to me. Social distancing measures are in place. As at Inverness, they handle all light aircraft visitors and were friendly and very well organised. As at Kirkwall, HIAL mandate that a written pass is issued for all airside crew just in case we were challenged on our 50 metre walk back to the aircraft.

The flight back to Inverness was slow, with a groundspeed below 50 knots during the initial climb. Mountain wave made it hard hard to maintain altitude and since we were on a Procedural Service outside controlled airspace, we did request a block altitude clearance which was granted between FL80 and FL110. There were a number of gliders about also asking for clearances, generally as simple as within a given sector not above FL120. We didn’t see any but it does encourage me to have a FLARM receiver to detect and display them.

Winds at Inverness were reported at 17 knots about 40 degrees off the main runway track, so we flew the ILS with a view that if landing wasn’t possible then we’d circle to land on 29. In the event, the touchdown was quite gentle. Winds generally back and reduce in strength as you descend, but turbulence and sink is quite possible as you get closer to the ground. With such a long runway, we didn’t need a performance landing and so our aiming point could be well past the threshold.