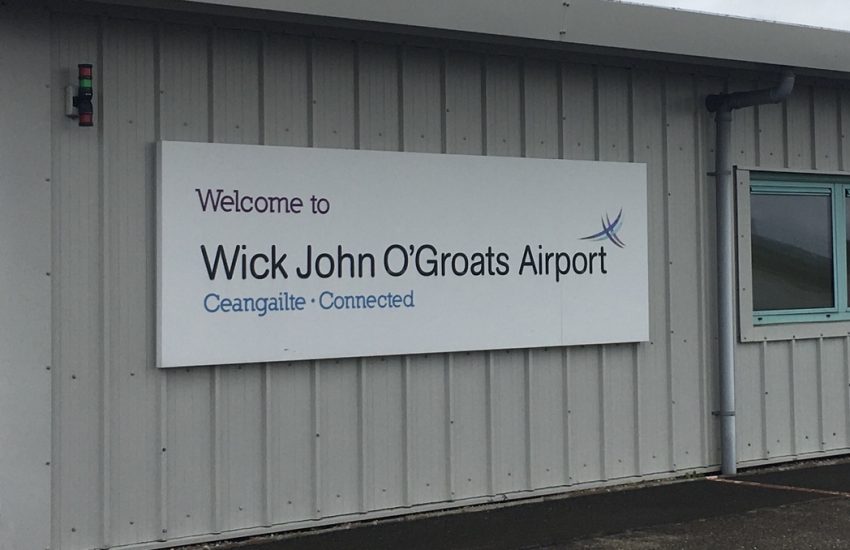 A day off from instruction allowed me to visit some friends who live near Wick. The flight there takes around 40 minutes compared with 2.5 hours by road, making that remote corner of the UK much more accessible.

Wick John O’Groats airport itself was NOTAMed open, but operating with restricted hours to allow ATC to have breaks. Commercial flights have ceased completely after both LoganAir and Eastern Airways pulled out, although the local Chamber of Commerce is making a business case for resumption as a Public Service Obligation. The airport, operated by HIAL, is well equipped with a modern passenger terminal, full ATC with instrument approaches (including RNAV), and all the equipment required for a full commercial passenger service. It just doesn’t have any commercial flights or passengers for the foreseeable future.

A phone call to ATC quickly obtained the required PPR. I could probably have paid my landing fee in the terminal but a further phone call to the nice people at Far North Aviation who handle small aircraft clarified that they could provide that service.

The flight up was pretty uneventful, just needing to avoid the active Tain Danger Area. I had hoped to fly VFR and follow some of the path of the railway line (shown in black above), which winds and weaves its way between settlements with quite a lot of deviation. Cloud north of Dornoch put paid to that idea.

I flew through patchy cloud well above Minimum Safety Altitude and made better progress than expected so arrived a few minutes ahead of schedule. I opted to practice a GPS hold at 4,000 feet well above the RNAV IAP while awaiting ATC re-opening, then requested the approach which was approved without delay. Winds were reported at 21 knots down the runway on the ground making for a slow approach ground speed and a gentle touchdown.

The apron was empty with nobody about while I parked up and walked across to Far North. They are very friendly there and easy to do business with. I’d forgotten they even have their own radio frequency so can be ready with the bowser to refuel on landing. Their primary customers are transatlantic flights for which they provide survival gear as well as fuel.

It was great to see my friends again and learn how lockdown had affected the area. The strong wind outside made it very unlikely to infect anyone and we wore masks when inside except when eating. The big developments in the area are the huge Beatrice offshore wind farm (Scotland’s largest) that generates 500 Megawatts (about twice what Dounray nuclear power station did) and a long overdue major road improvement to iron out the bends at Berriedale Braes. Local industry includes exporting Caithness slate which is in popular demand these days but overall this is not the wealthiest part of the country. I understand that there have been noticeably more camper vans in the area during lockdown, not really causing any nuisance once the camping sites re-opened and waste became easier to dispose of.

My return to the aircraft required the one security guard on duty to walk me through the side gate and inspect my pass (and photo ID). It’s hard to take this level of security seriously when there are no longer any commercial flights or obvious reasons for non-pilots to go airside. Nonetheless, HIAL procedures were followed to the letter.

The flight back with a following wind was fairly uneventful. Lossie Radar confirmed that the Tain Danger Area was no longer active, so a direct routing over the sea at FL55 kept me just above the clouds. I guess I could argue I was VFR so the level was appropriate. I delayed my descent in order to remain within glide range. Inverness Radar kindly provided a vectored ILS which involved a 270 degree turn to lose altitude in time and in hindsight I could easily have descended for a visual approach given the cloudbase was at least 2,500 feet. There wasn’t much other traffic around and the tower cleared me to land from about 5 miles out.

With the type and level of traffic at Wick airport today, I do wonder if full ATC service will remain commercially viable. It would seem to me that an Air/Ground service and/or self announced solution might be more appropriate, perhaps augmented by one of the those automated weather stations (ASOS) popular throughout the USA. I know that HIAL have been developing remote tower solutions, manned centrally from Inverness, but even that seems overly complex for Wick to cope with just a handful of private flights each day.