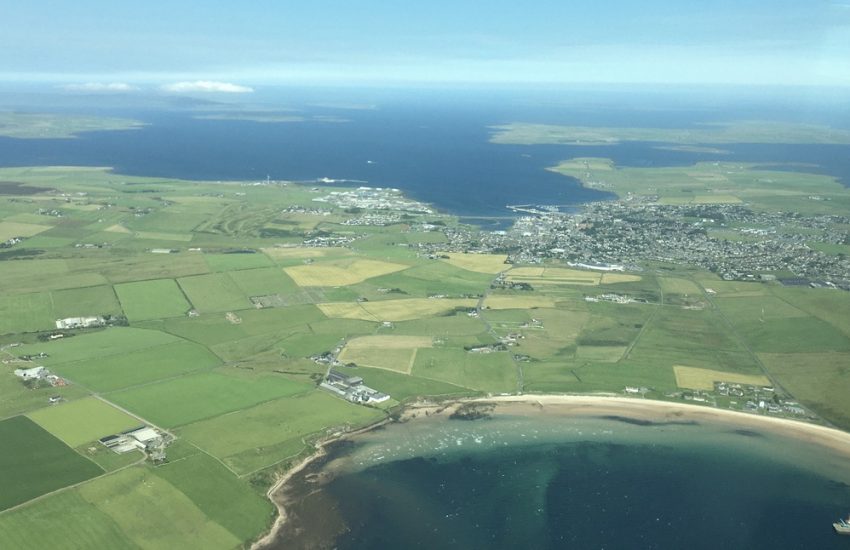 We flew from Inverness to Kirkwall via Stornoway in the Cessna 182, flying some more unusual instrument approaches.

Stornoway has many commercial flights each day but is one of the few commercial UK airports without a precision instrument approach. Pilots don’t get a glideslope and have to interpret that based on the DME distance from the runway. Adding a little further complexity, there are two DMEs – one on the airport and another located a few miles off to the east and is used as part of the arrival and holding procedures. And just for fun, one procedure involves flying outbound directly on a reciprocal of the inbound track until you turn back, unlike the more common teardrop pattern.

It does amaze me that we would still have commercial airports without precision approaches in this day and age, and I was further surprised to learn that some of the Saab 340 passenger aircraft aren’t yet fitted with avionics approved for RNAV approaches. So there remain scenarios where these flights fly IFR approaches for real using the ADF. My own little TB20 and the Cessna are both technically more advanced in that respect. All European IFR pilots must by this month have undertaken PBN training and revalidated by flying an RNAV approach which these commercial pilots complete in a simulator.

Arriving into Stornoway from the south, we flew the Direct Arrival from the south for Runway 36 which involves a DME arc and must ensure you have the correct VOR/DME tuned in. Then we flew north overhead the airfield into the procedure for Runway 18. You fly north outbound on a reverse course of the inbound track which means the localiser CDI indicates any course corrections the wrong way. You should be using the NDB as the primary means of navigating outbound but I supplemented that with the GPS in OBS mode, switching back to VLOC mode prior to intercepting the localiser after the turn. There is no glideslope, so you calibrate your descent based on distance from the runway using the DME and groundspeed from the GPS. Fortunately it’s fairly flat low ground out to the north but is still quite challenging. Should the airfield DME be offline, you have to resort to an NDB approach with a high (1,000 feet) minima that can be reduced using the other DME.

For those interested in convoluted instrument approaches, it’s worth a look.

The airfield was operating with reduced number of flights but seemed to have a fairly constant flow of traffic.

Thereafter we flew on to Kirkwall, flying a couple of approaches with a reasonable crosswind before landing.

The tourist part of the program now kicked in, and we stayed in a lovely B&B called the Button-Ben – it’s a play on the words “But and Ben” meaning a small cottage with two rooms, popular in Scotland and well known to those reading The Broons comic strip. The fish for our evening meal was freshly caught. Popular island hotspots were visited including the Ring of Brodgar Neolithic Stones (older than Stonehenge) and Italian Chapel built by Italian PoWs during WW2, right next to Lamb’s Holm airstrip.

The return back to Inverness was fairly uneventful.

A fifth share in G-CORB is up for sale! One of my co-owners has lost his medical and moving on. Click here for full details (including a short sales video) and agent contact details. This TB20 hangared at Gloucester is kept fully IFR capable so we’d be looking for a team player with at least an IR(R), interested in going places and ideally considering or already having a full SEP Instrument Rating.