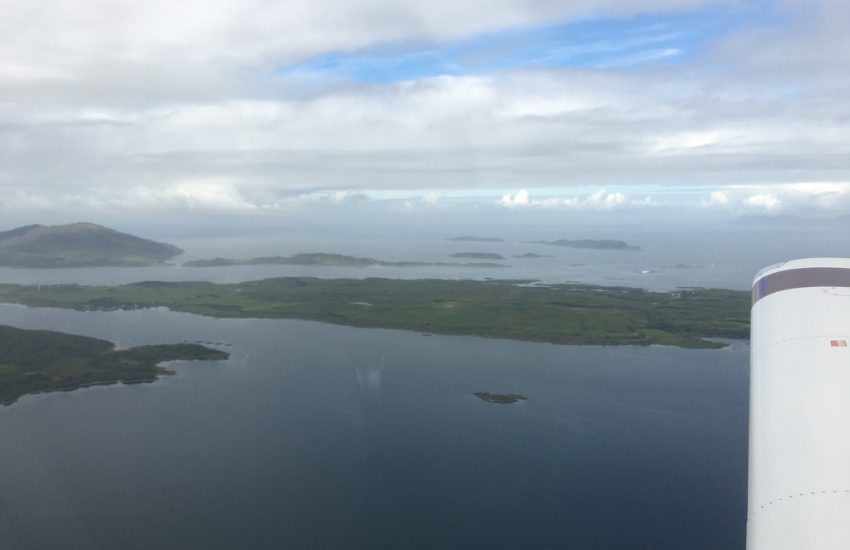 I had filed IFR from Inverness to Gloucester, with a fuel stop at Kirkbride near Carlisle as on the way north. The weather on the morning itself looked good, I wasn’t in any particular hurry, and so I thought I’d make the most of the day by flying VFR around and down the west coast.

I’ve flown down the Great Glen before, over Loch Ness and Loch Linnie down to Oban. You have to keep a close eye on the cloudbase so as not to be “letterboxed” in. At 2,000 feet, radio contact is lost about 20 miles south west of Inverness and I couldn’t raise Scottish Information until south of Oban. There were very few other aircraft about.

My scenic route also took me overhead Macrihanish, next Campbeltown on Mull – closed at weekends, Aisla Craig which I orbited from a safe distance/altitide, Castle Kennedy (lovely looking airfield next to the Castle which normally welcomes visitors) and a slight detour to inspect Glenswinton (quite a tricky one-way short grass field with trees at the far end).

Kirkbride were as friendly as before, ready and waiting at the pumps when I landed.

My IFR flight plan back to Gloucester was fairly straightforward. I had selected an optimised route, direct to BARTN (a waypoint overhead Manchester Barton Airport), then through the controlled airspace and exiting at STAFA. London Information were very busy but opened my IFR flight plan and co-ordinated my airways entry clearance in the climb towards POL. I thought I must have copied down the frequency incorrectly because it was silent and I couldn’t raise them, so checked back with London Information. I was Number 3 in the queue, and in turn was told that I did have the frequency correct, and it did work when I tried again. Apparently Scottish could hear me on my first attempts, but I couldn’t get their reply.

The amended routing via POL was to keep me clear of parachuting at Cark, which I also heard on frequency. It was very straightforward routing to STAFA when I was handed back to London Information – the Western Radar position was again unmanned. I turned west to ensure I remained well clear of Birmingham airspace during my descent – there is a stub off to the west that starts at FL60.

As on my trip up north, there was only a single sector/frequency in controlled airspace throughout – quite surprising – and it was quite busy at times with machine-gun like rapid firing of instructions to different commercial aircraft. You do have to be on the ball, listening out in case one of those instructions is for you.

Gloucester wasn’t very busy and after having had so many instrument approaches in the past week, I thought it simplest to make a direct base join VFR to land.