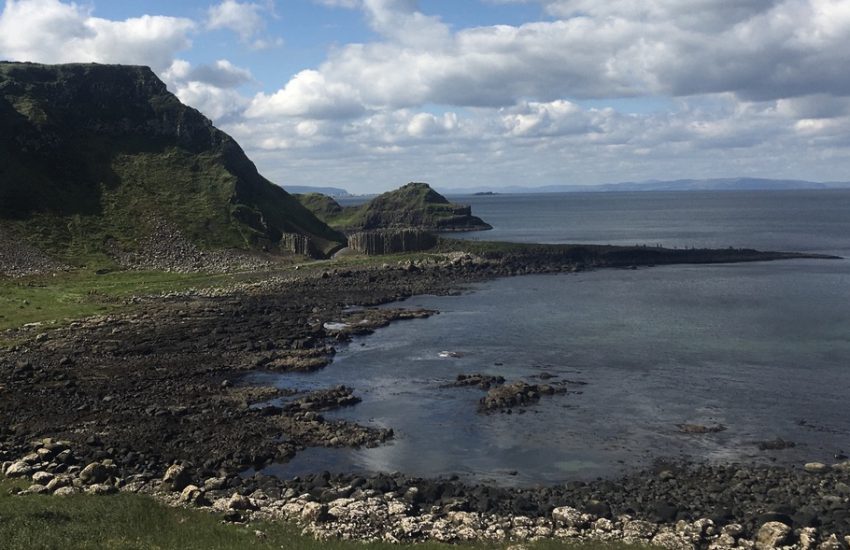 COVID-19 restrictions make it difficult to fly abroad for pleasure. The closest European countries require quarantine on arrival or return, and this may change at short notice. Ireland on the other hand has much closer links with the UK and as part of the Common Travel Area has far fewer constraints on travel. My wife and I took a week’s break, visiting both North and South Ireland by landing at Derry, Donegal and Belfast in my group shared TB20. We flew in our own aircraft, travelled around in hire cars, walked outside in remote areas, avoided busy places and stayed/ate at quiet hotels with appropriate anti-virus measures wearing masks when appropriate.

Gloucester to Derry via Airways

The outbound leg to Derry was IFR airways from Gloucester, routing just south of Liverpool and just north of Belfast. In the past my previous airways departures north have had me working the Western Radar sector who provide a traffic service outside controlled airspace and co-ordinate my airways entry clearance. Last month I found Western Radar sector not operating and needed to do this via London Information once airborne. Today, Gloucester cleared me to 3,000 feet and passed me over to the London Military controller who performed the same role. As always, it’s comforting to get some sort of radar service early on in a flight as you climb up through cloud. Although cleared to enter controlled airspace routing via STAFA, I was asked to remain west of the Birmingham sector which involved only a very slight left and probably made life a little easier for co-ordination between the controllers. I double-checked I was cleared to transit through a stub of Class D in my climb.

Scottish Control routed me at FL100 north west keeping just inside their controlled airspace before handing off to Ronaldsway in the Isle of Man. We never saw the island, sitting well about the cloud tops, and it wasn’t long before another Scottish sector controller took over. With much less airline traffic, these sectors seem to be getting quite large – the same controller was speaking to the commercial flight departing Barra in the Outer Hebrides. Belfast Aldergrove radar vectored me north of their airspace, keeping me clear of parachuting activity also to their north. I could hear the same radar controller handling the tower, clearing aircraft to land and taxi. It was far less busy on the radio than at Gloucester. I was asked to route direct to COLRE, an airways reporting point near Coleraine that forms part of the IFR arrival procedure into Derry Airport.

My Garmin GTN650 box had no problem finding and tracking towards that, but I was surprised this wasn’t in the SkyDemon database. I later found this is because SkyDemon capture this information from the AIP (Official Aeronautical Information Publication), where COLRE is more specifically only listed in the Derry airport arrival procedures.

Aldergrove prompted me to commence my descent when ready and I probably did leave it a little bit late, wanting to remain above the cloud tops for as long as reasonable. It meant a slightly more rapid descent than usual (say 1,000 feet per minute rather than 500) but I caught up with and was below the ILS glideslope in time to follow it in for a straight in landing. There wasn’t anyone else flying nearby to affect and the cloudbase wasn’t very low.

A friendly marshaller was waiting at the parking spot. I had asked for fuel on arrival and a truck/trailer was summoned – it needed to be checked through security before entering this part of the apron. As always, best to sort out the refuelling on arrival if possible because you never know how long it might take. Departing the country to Eire with full tanks meant we could reclaim duty for exporting the fuel, offsetting the slightly higher price.

Another small aircraft arrived shortly after us, and there are a few commercial services back in operation to destinations including London Stansted, Glasgow etc.

We were escorted out through the passenger terminal where it was a short walk to the hire car collection point.

I’d been telephoned and left a voicemail while airborne because Border Force was looking for my GAR form, but before landing they realised this wasn’t required because I had departed from a Police designated airport and we didn’t see anyone there to meet us.

There are two hire car firms onsite and it was very straightforward. It allowed us to explore the north coast of Northern Ireland, visiting the City of Derry, the Giant’s Causeway and the Bishops Palace over the next couple of days.

I had previously visited Derry for a day so the city wasn’t new to me, but it was good to walk around the walls with my wife and explore a it little more. There’s been some investment in public transport with what looks like a new railway station, smart looking railway carriages with plenty of bicycle stands that would put some mainland rail routes to shame.

National Trust properties were open with some restrictions such as pre-booked timed entry tickets and very limited catering. Fortunately my wife had researched that side of the trip and everything went to plan at both the Causeway and the Downhill estate.

The Irish have a reputation for friendliness and warm welcome, and we found the hospitality in our hotel and restaurants very much met our expectation. It does seem many things are smaller here – commonly using the expression Wee – “Just a wee minute”, “Let me get you the wee bill”, “Here’s your wee key” etc. etc. We loved it.

On the other hand, this isn’t the most affluent part of the country. I can’t remember the last time I bought petrol where I had to go into the shop and pay in advance before being allowed to fill the tank. There were warning signs in the hotel about counterfeit money not being accepted but we paid for everything via card rather than cash with almost all transactions contactless up to the new £45 limit.

Northern Ireland is part of the same country (United Kingdom) and so there is no requirement for Immigration or Customs checks (that will probably change on 1st Jan 2021). However, the Prevention of Terrorism Act 1976 does require aircraft commanders to notify the Police at least 12 hours in advance and answer any questions. Notification is easily done by filling in the same GAR form used when returning from abroad and sending it via the Border Force portal or onlinegar.com. I understand that BF will be mandating use of one of these methods and phasing out email/fax submissions in the near future.

Since I was flying between two UK airports that have been designated as Police, I did not need to file a GAR, and this was the only flight in this trip that was paperwork free. I was not stopped or questioned and we did not have to show our passports to anyone, although that does happen sometimes.

Although it could be argued that I did not legally have to file a flight plan, it would be sensible for anyone crossing a large body of water to do so. It also makes it much easier for ATC who can anticipate your arrival time. Since I wanted to fly airways, I needed an IFR plan anyway. Additionally, I suspect the chances of being questioned by the authorities is higher if you don’t, and that includes subsequent flights on our trip. I filed my plan through Autorouter which is my preferred IFR flight planning tool.