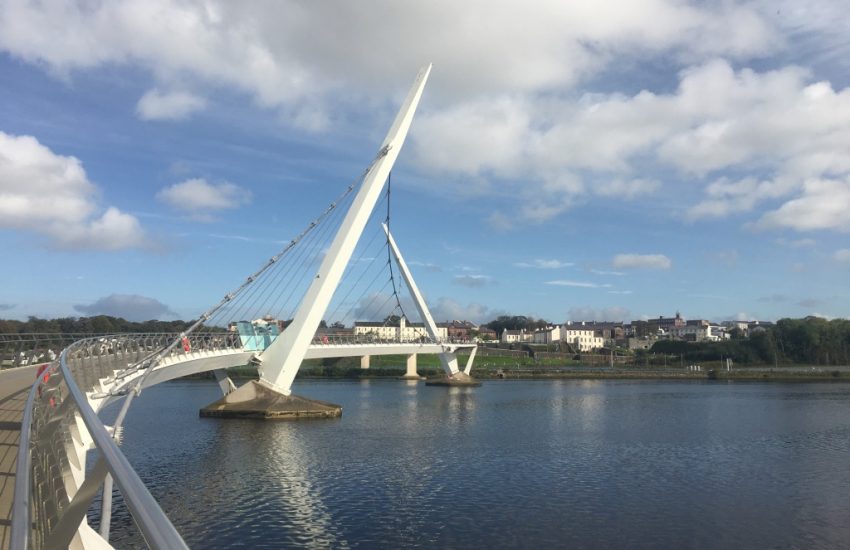 Next stop on my daytrip to Ireland was on the north coast. Derry was the first in the UK to be awarded European City of Culture in 2013, and continues to attract many tourists. It has a large natural harbour and has in the past been a strategic and busy shipping port for centuries.

Crossing an international boundary requires a flight plan (for which VFR using SkyDemon was very straightforward). A GAR form with 12 hours notice was required for the UK Border Force and Special Branch, also submitted using SkyDemon (using OnlineGAR). The airport is PPR and I emailed them the day before but had to phone them some hours later after no reply. It really wasn’t a problem. I’d already sent an Irish GAR form to Weston airport, so they didn’t need anything further.

The departure route to the north west from Weston is fairly straightforward, remaining south of Maynooth while arrivals stay north. I was instructed to remain south of the motorway (easily seen), and the controlled airspace steps up in stages allowing a gentle climb to 3,000 feet heading north west. Dublin Information provided a Flight Information Service (none of the complexity of Basic, Traffic etc. here) and also called out incoming traffic that would potentially conflict (a helicopter inbound to Weston) which passed both wide and well below me.

Dublin Information helpfully noted that radio coverage wasn’t great on my route, so suggested Shannon Information and Eniskillen Radio as alternative should I lose radio contact. With no other traffic reported, it felt very much as if I was on my own for much of the journey.

I flew at about 3,000 ft, dipping down at times to keep clear of cloud.

Crossing an international border here isn’t a big deal. There are no large painted lines on the ground, long walls, or specially cleared area on either side. I could not tell which country I was in apart from looking at my map. I was outside radio range at this point – probably could have spoken with Eniskillen but instead tried to raise Scottish Information without success.

About 20 miles south of Derry, I picked up the ATIS and contacted Approach. They simply directed me to report left base for runway 26 which was easy to follow. A helicopter was on frequency flying over the city well to my west.

It was a very straightforward VFR arrival with no other traffic or activity to affect. I was asked how long I planned to stay for, so they could direct me to an appropriate parking spot. The approach frequency was combined with tower, so no change required. A marshaller appeared as I entered the taxiway and positioned me close to the terminal. Another staff member appeared to escort me to the terminal building a few yards away, and was in no hurry to rush my shutting down/tidy up procedure.

Short 4 minute video of the highlights of the flight below.

Quite a swish modern terminal building with lots of glass outside and plenty of seating, cafe etc. inside. The information desk takes payment for landing fees etc. AVGAS is attractively priced but the pilot needs to be present when refuelling, then come landside to pay, so it’s best to do that immediately on arrival.

Taxis into town take 20 minutes for a low fixed fee, while buses take 40 minutes. Car hire is available with attractions such as Giant’s Causeway (40 mins) and Donegal (20 mins) in easy reach.

The 17th century walls have been well restored throughout including 24 cannons, making it easy to walk around the city centre with plenty of views. There are many tourist attractions including a very modern and well thought out Tower Museum.

I felt under a little time pressure to get going. Gloucester closes at 6pm at weekends and although I had arranged PPR to arrive out of hours, sunset at 6:36pm would be the very latest. Unlike the US, airports in the UK don’t yet have pilot controlled lighting which allow unattended night arrivals. With just under 2 hour flight time, that meant departing before 4pm. I had filed for 3:30pm departure and hoped to be not much later than that – it’s much easier to delay a flight plan than bring the time forward.

After paying my landing fees at the information desk, I was efficiently escorted through security (empty pockets, belt off etc.), then left awaiting an escort out to my aircraft. There was a short delay while figuring out who would do this, then a quick preflight and review of the flight plan before departure.

An unusual feature of this airport is the train line that passes close to the runway 26 threshold. It’s similar to Shoreham except that arrivals are not permitted when trains are crossing. ATC have a switch to stop trains and use this during commercial arrivals. GA traffic is required to wait for up to five minutes if there are trains passing. My own inbound arrival wasn’t affected but I did spot a train passing during my pre-flight – see it just above the engine cowling below.

A review of the flight briefing pack – emailed by Autorouter a couple of hours prior to departure – and listening to the ATIS, then called for start. Tower frequency wasn’t in use (although ATC did respond and ask me to switch to Approach).

Surprisingly, I was within glide range all the way from Northern Ireland to well south-east of the Isle of Man. I was switched between Scottish, Ronaldsway Radar (on the Isle of Man, which I didn’t actually see below cloud), back to Scottish, then another Scottish frequency, and finally on to Western Radar.

After coasting in and overhead Chester, I was asked if a direct routing to Gloucester would be OK. This worked well for both parties – I had had a good, high altitude flight over the water but shortened my overall route while ATC didn’t need to fit me in around the busy Manchester/Liverpool activity). Western Radar transferred me across to Gloucester at about 4,000 feet, and I made a straight in VFR arrival joining right base for 27. Airborne flight time was just 1:45.