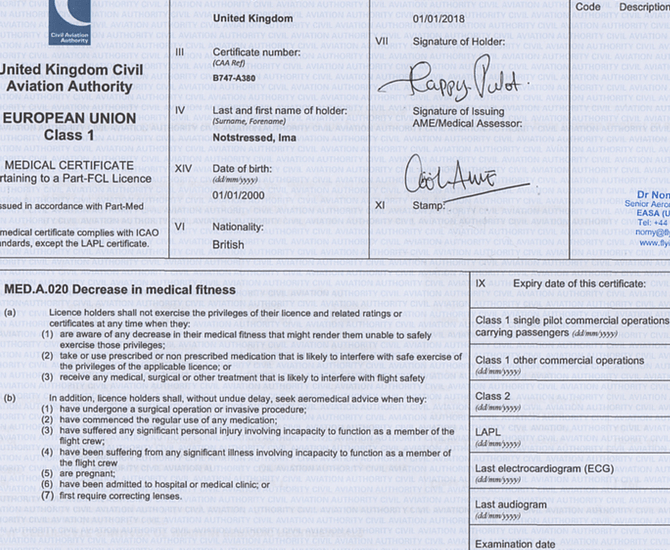 Having undergone the trauma of the EASA CPL (Commercial Pilot Licence) theory exams in order to become a Flight Instructor, it seemed to me to be a smaller step to complete the practical side of the course and attain a full CPL licence. While I am far too old to become an airline pilot, it could open other opportunities including CPL instruction and commercial aspects of General Aviation.

To gain a CPL from this point, I’d require to:

One downside is that the piggyback FAA licence I have would be rendered invalid because EASA change your licence number depending on what type of licence you have (PPL/CPL/ATPL). It’s an unfortunate and disappointing side-effect of well intentioned but poorly considered regulation.

The first step would be the medical, because without it the licence is unattainable. For anyone embarking on a commercial pilot career, it is strongly recommended to obtain your Class 1 at the earliest stage. If there are any problems identified, you can either work around them (e.g. by arranging additional special tests) or understand that a commercial pilot career is not open to you.

You don’t need to be a perfect specimen to pass

Some people are under the impression that you must be an unblemished physical athlete to pass a Class 1, such that even that wearing spectacles or taking any medication would disqualify applicants. Clearly there are limits (and these are well documented), but medical professionals will work with you to resolve issues where possible. For example, there are even commercial pilots with Type 1 diabetes and even a few flying with prosthetic limbs (accompanied by a co-pilot).

You normally only have to take a Class 1 Initial examination at an AeMC (AeroMedical Centre) once in your lifetime. Thereafter, a local AME (Aviation Medical Examiner) regularly revalidates it. Some pilots undergo an Initial, then drop back to Class 2 until such time as they require it. However if you let your medical certificate lapse completely, you may have to undergo another Initial Examination.

The validity period of a Class 1 varies with age (on date of issue) and type of activity.

It used to be the case that everyone had to go to the CAA offices at Gatwick for their Initial Class 1. That in-house service has now been discontinued and instead there are currently three private companies approved to administer the tests:

They all conduct the same tests, charge around the same price and reportedly have similar lead times of a few weeks. Certificates are issued on the same day unless there are problems (hint you must bring the correct paperwork).

I chose Heathrow Medical Services primarily for ease of travel, and I suspect my experience at the other centres would have been similar. It appears to be the only one to have been inspected by the Care Quality Commission to date. Located just off the M25/M4 adjacent to Heathrow Airport, it’s convenient for commercial pilots and those visiting from abroad. It doesn’t just perform Initial checks for pilots, but also annual revalidations and examinations for other occupations. A quick phone call was enough to secure my appointment a few weeks later, paying in full by credit card, followed by confirmation and detailed instructions by email.

There were several specific documents I had to take along on the day:

The somewhat harsh contractual terms stated that failure to arrive within 15 minutes of your appointment could result in it being cancelled (and payment forfeit). I don’t know how strictly they apply this rule, presumably to avoid time wasters, but it does motivate you to arrive promptly – another candidate was there almost 2 hours early. Waiting room seating is limited, so you are advised that parents or friends may have to wait in their car outside.

It was quite easy to drive to and I got the last dedicated parking space at 10:45. There is also metered street parking outside.

There appeared to be six staff onsite during the day:

The layout of the building (a converted house) was slightly quirky. The consulting rooms were huge, the secretaries shared a large room while the patient waiting room was much smaller, the toilet tiny, and the staircase was narrow.

However the waiting room did have plenty of reading material (Flight Training News, Pilot Magazine etc.), TV showing 24-hour news and a chilled water dispenser. I expected it to be full of 20 year old aspiring cadets, but instead found a couple of similarly mature (ie old) pilots, one in exactly the same situation as myself, the other a parent escorting his son.

After offering up my passport and signing a consent form, the medical technician comes first. I may have omitted one or two tests, but recall these included:

Results are all entered into a computer in real-time, ready for the doctor to review.

You then sit down in the waiting room for the drug test, which involves sticking a plastic cartridge in your mouth for about ten minutes (until three strip indicators all turn red).

A very personable and friendly chat with the doctor, who delved into my general health. He listened on his stethoscope while breathing front and back, tapped my knees and scratched my soles for reflexes, checked my gait while walking, looked for tattoos, noted scars, discussed my knee cartilage operation from 10 years ago and several other general checks. He also took my blood pressure, then pin-pricked my finger to take a blood sample (including both a Haemoglobin and a Lipid test) and told me my cholesterol level.

Third examination was from the optician. It’s a very thorough eye test, with many test machines around the room – field vision test (look at the dots and press the button when each light comes on), “puffer” eye pressure test (I really hate that one, but it was easier than at the opticians), read the letters on the screen while various lenses are put on, colour vision test, and the one where a long stick is put on your nose and the target moved backwards and forwards until you go cross-eyed. A very thorough inspection of your retina with a spotlight while you look in various directions. In short, pretty much every optical check I’ve ever had apart from taking a retina photo.

The optician was friendly, personable, knowledgeable and extremely professional throughout.

After a further indeterminate period in the waiting room, one of the secretaries suddenly popped out and asked me to sign my freshly printed Class 1 Medical Certificate, thanked me for coming and it was done. It had taken about three hours overall and there were no delays or particular surprises.

The doctor had made it clear that for the subsequent 12 months (or earlier if I had another medical elsewhere), I should contact him (typically by email) regarding any issues that might affect my fitness to fly. Thereafter, I would revert back to my normal AME. A full size copy of the notes on the licence was also given to me to highlight which conditions prevent flying or must be reported.

I’m somewhat relieved, because you never know exactly what might be found, and will now start researching options for a CPL practical course as the next step.