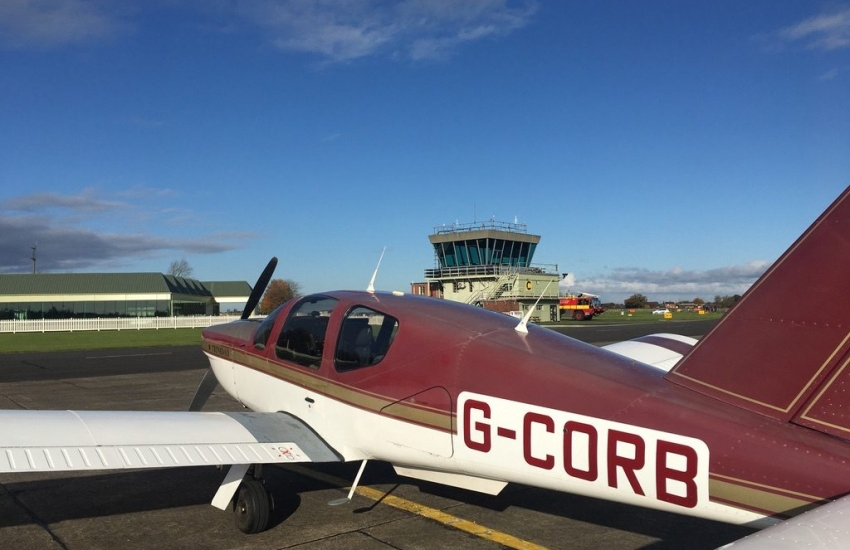 Leeds East (EGCM) used to be RAF Church Fenton (EGXG), a busy wartime fighter base. For some years it was the Royal Navy’s Elementary Flying Training School, and from 1998 to 2003 became the RAF’s main Elementary Flight Training airfield. It’s about 20 miles east of Leeds City, so about 30 minutes driving or 1h15 on public transport. Although this is more than double the distance of the main commercial Leeds/Bradford airport, it’s only 5 minutes more driving time.

It was sold in 2014 to Makins Enterprises with the intention of becoming a hub for business jets and hosting a flying school. Investments have made this a well equipped if rather under-utilised airport with excellent surfaces ( 6,000 foot/1,700m runway, taxiways, parking), self-service fuel, fire engine and plenty of hangar space.

MakinAir owns and hangars an almost new Pilatus PC12 there which you can hire for leisure or business trips.

The airfield is very close to Sherburn-in-Elmet, a thriving GA airfield with a busy flying school and great cafe. I’d been there before, so it would be quite a contrast with this much larger facility which is far quieter.

The TB20 is great fun to fly and I did a little more hand flying rather than using the autopilot. It felt strange not having a student in the left hand seat, because most of my flying this year has been instruction. You can easily spot that from the track recorded by SkyDemon at the bottom of the article – I was having fun rather than aiming to fly at a specific altitude or heading.

Fenton Radio is the callsign, and so a radio information service only. There was no other traffic to affect me, so I positioned via the VRP of M1/A1 junction then made a straight in for runway 06. It’s massive and with no obstacles, made it really very straightforward. After parking up, I climbed up outside the tower to pay the landing fee (cards accepted), then walked behind the exhibition hall to the cafe.

After a perfectly normal take-off, I looked down to notice the gear-in-transit warning light was still on. Normally this comes on while the landing gear is retracting, then goes off once complete. Remaining on suggested one of:

As a first measure, I lowered and retracted the gear with the same result. After that, at least I knew it would go down and lock when I wanted to land. I asked the tower if I could make a low approach for them to inspect it. They sent the fire truck out – apart from being onsite if there was a problem they would also get a closer look.

The report back was that while both main gear were fully retracted, the nosegear was slightly down. Sounded like a hydraulic problem to me – either the pump not fully working or fluid levels too low.

I thought it safe to continue my flight back to Gloucester but at a slightly slower speed, and double-checked the maximum gear down speed in the checklist. It was uneventful apart from that.

A subsequent gear inspection by our maintenance engineers discovered there was a faulty electrical connection which turned off the hydraulic pump before the gear was fully retracted, and this was resolved quite quickly. In retrospect, I should have flown back with the gear down because there was a chance the pump could have been operating continuously. In that case, with insufficient fluid, the pump would have likely worn out and required replacement. Something to learn from if this should ever happen again.