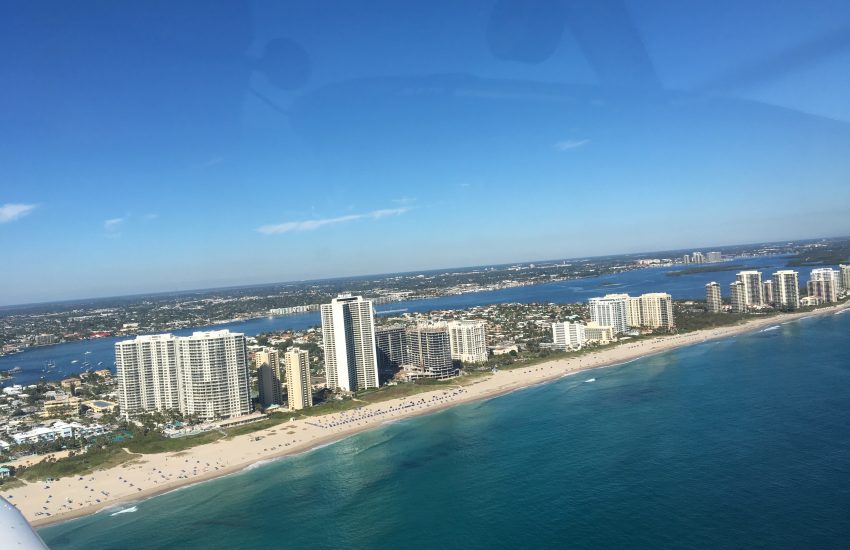 PPL instructing has generally been quite good fun, working with enthusiastic capable students who don’t seem to mind flying older PA28 aircraft. CB-IR courses have almost all been in the student’s own aircraft, mostly with glass panels such as G1000 and Aspen. There was also some IMC/IR(R) training but generally I’ve found less demand. My groundschool classes for flying abroad remain quite popular and seem to be well received.

The highlights on the personal flying side included a February holiday in Florida landing at Key West then flying up the shoreline of Miami and Palm Beach. I’ve flown into Belgium more often than France this year, perhaps because until recently it didn’t require any PPR for immigration – weekends in Ostend, Brugge and Kortrijk were all very enjoyable. I’d tried to organise two different multi-day multi-aircraft tours through different flying clubs, but various factors reduced that to a single five day tour in a single aircraft – nonetheless, landing at Innsbruck was a fabulous experience.

Our TB20 share, G-CORB, has had a number of minor technical issues during the year and was less available on the dates when I could use it. With so many dual instruction flights, I’ve found it quite enjoyable to fly solo where before I’ve tended to almost always take passengers or fly with other pilots. One of my co-owners and I used it to demonstrate several RNAV approaches into smaller airfields as part of the EU sponsored GAINS Project, for which I was elevated to a temporary CPL for two months so that our expenses could be covered.

Other flying related activities have been more involved with local and national pilot organisations. My committee duties with the Bristol Aero Club mainly cover Financial budgeting and IT. Elsewhere, I helped revamp and modernise the PPL/IR website and have just taken over as Chair of the AOPA UK Members’ Working Group.

Climate change has been more prominent this year, with dramatic weather events raising growing awareness of higher global temperatures. Whether you agree with the scientists or not, most would accept that aviation generates around 2%, almost entirely from commercial aviation. Light aircraft like those I fly are a very tiny proportion of that – the LAA calculated that their entire UK fleet of over 2,000 aircraft consumed less in an entire year than a single 777 airliner does in a week. But for what it’s worth, I’ve decided to offset the carbon emissions from my personal flights through a tree planting scheme, which will increase my costs by about 3-4%. I’ve also personally planted 33 trees this month in a friend’s field, which at least makes me feel better.

My thanks to all those who have mentored, supported and flown with me throughout the year.

Definitely plenty of that, with the usual mixed bag of delays from weather, technical issues and changing arrangements compensated by the progress made from students with a wide range of backgrounds, expertise and ability. I’ve spread myself between RAF Brize Norton Flying Club, Bristol Aero Club and Rate One Aviation (both at Gloucester Airport) which at times has kept me busy and at other times lose out.

2: Some longer trips into Europe

The five day tour reaching Innsbruck via Belgium, France and Germany was extremely rewarding and enjoyable. The glorious weather certainly helped, and the views were stunning.

3: Keep up with PBN developments

My contribution this year has been participating in the GAINS project, flying numerous approaches at Sywell, Duxford and Cambridge. These were all challenging in different ways and involved some steep approaches, Radius to Fix turns and complex missed approach tracks. Thanks to my observers who joined me on those flights. I continue to take a strong interest in regulatory progress to approve new RNAV approaches in the UK, to which the CAA seems strongly opposed. Perhaps the new Transport Secretary of State (himself a GA Pilot) will see some really progress next year – we desperately need more approved to increase utility of GA airfields and expand training capacity but more importantly to improve flight safety.

I’m open to all types of instruction at all levels. I’d appreciate a more stable/consistent schedule, which has been pretty chaotic at times this year due to student scheduling demands, technical issues with aircraft, weather and other operational issues. At least I now have a small backlog of students to work with, so if one drops out at short notice then another can substitute. We’ve also expanded the fleet at Bristol Aero Club from two to three aircraft.

2: Another longer trip into Europe

The focus on instruction definitely reduced the opportunities for day trips and weekends to Europe. I’ve learned that few pilots are able to take up to a week off for a flying expedition, so will try some simpler/shorter trips next year. Meanwhile, I still have a few juicy destinations on my bucket list, encouraged by some great trip write-ups in the flying magazines.

Having taken the CPL Theory Exams and now also passed the Class 1 medical, it would seem worthwhile to complete the practical side of the course and take the skill test. I’d require a minimum of 15 hours instruction because I already have an IR. At my advanced age, I wouldn’t seek to fly an airliner and can’t fly single pilot with fare-paying passengers, but perhaps there will be other opportunities.