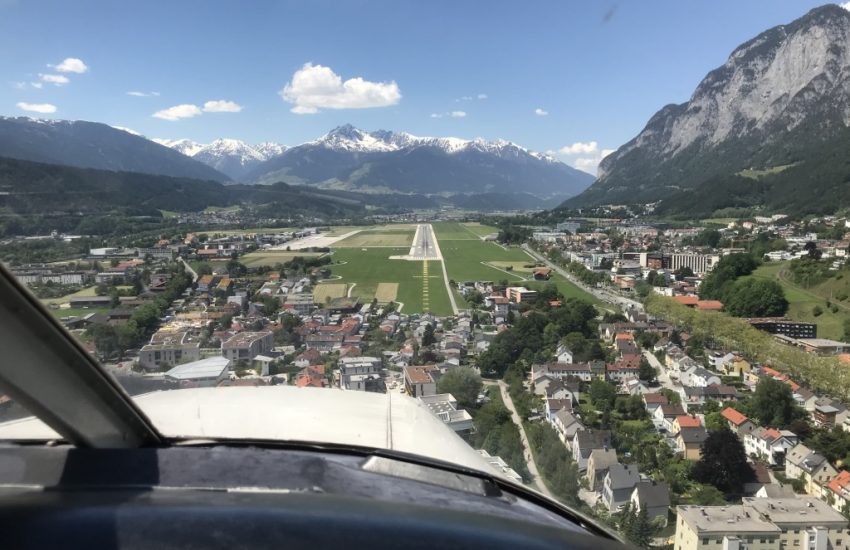 Nestled in the Austrian Alps, with an elevation of 1,900 feet, Innsbruck is a scenic airport. The weather was about as perfect as it could be for our flight, winds calm, few clouds at 10,000 feet, excellent visibility.

We flew in from Speyer (EDNY) in southern Germany onboard G-BBXW, our well worn but fully IFR equipped PA28-151 and departed next day to Friedrischafen. VFR flight plans were required but no immigration formalities or PPR.

There are several defined VFR routes into Innsbruck: north, south, east and west. I chose the northerly route which is the shortest and involves winding your way through a couple of valleys in a wide S-turn. There’s a lot of information in the Austrian AIP entry for Innsbruck and a separate briefing on the effects of the Foehn wind which can cause severe windsheer and turbulence. It was more than enough to put me off attempting to fly in with those conditions are active.

These routes are known as GAFOR (General Aviation Forecast), with each route having its own number. You’ll find three letter status given for each route, based on the weather over the next three 2 hour slots.

The charts below (on a different day) show how this is displayed for closed, open and difficult routes. Our chosen northerly route via N1 and N2 isn’t reported. On the day of our flight, I’m pleased to say everything was reported as Open.

We topped off the tanks before departure to ensure we had more than enough to cover any eventuality – total 5 hours endurance. In retrospect this would have affected our climb rate and service ceiling, but as you can read later this wasn’t a problem.

My turn to fly this leg, so I’d filed a VFR flight plan through SkyDemon which was notified activated by the FISO shortly after we took off.

After avoiding the restricted area directly south west of the airfield (a power plant), we flew a southerly track to keep well clear of Stuttgart airspace, routing via the SUL VOR then KPT VOR almost on the border.

The contrast between the relatively flat plains of southern Germany on the left and the high peaks of the Alps on the right is stark. They really do rise very suddenly and prominently, and are very imposing – even daunting.

Langen Information provided a flight information service most of the way to the Austrian border, and handed us off to Innsbruck Approach while still in German territory. We were simply asked to report at November, the northerly reporting point on the Austrian border, with no altitude restrictions. For maximum safety, we chose to fly as high as 9,500 feet – almost the service limit of the aircraft. The ATIS stated that the transition altitude is variable and that the runway in use at ATC discretion.

Innsbruck is equipped with their own MLAT receivers throughout the valleys, similar to the technology used by FlightRadar24 and related flight tracking services, providing ATC with a very clear picture of where aircraft are. Mode C operation is very important for altitude tracking and we heard of one aircraft being reminded to turn that on. They must also have plenty of radio relays because we were in good R/T coverage throughout.

It seemed strange to be handed over to the tower at the reporting point when we couldn’t see the airport which was over in the next valley. The tower cleared me into their Class D airspace, routing November 1, November 2, Whiskey and India. We proceeded gingerly around the corner and only with the airfield in sight did I commence a fairly steep descent. At each stage there was plenty of room for us to turn back if we didn’t like what we saw.

On reaching India, I was further instructed to join downwind and delay my base turn until directed due to landing traffic on final. It was an incredibly scenic approach over the city with the mountains all around. I have almost no mountain flying training (although I have flown over the Rockies) and this was quite stunning. QFE would have been no use here – the airfield elevation is 1900 feet, so about 63 hectopascals difference from QNH. With an outside air temperature of 21C, the density altitude on landing would be just over 3,000 feet.

SkyDemon proved immensely useful, allowing the VFR arrival chart to be superimposed on your actual groundtrack.

A follow-me vehicle and marshaller positioned us for parking. A fuel truck arrived promptly. Staff were extremely friendly and welcoming. The FBO matched anything I’ve seen in the US, with crew briefing and rest facilities, dedicated security team with baggage scanners. Parking cost just €1 per day.

Video of our inbound flight

The weather can change here quickly and dramatically. Some rain arrived late evening, and the contrast from our hotel shows up in the two pictures below:

John flew the outbound leg the next morning, deciding to take the scenic route out to the east. With wind calm, we asked for a 08 departure but the tower preferred we took off on 26 – probably a good idea given the more limited EFATO choices and noise implications. Our clearance was the Mike route, not above 4000 feet (ie 1100 feet above the runway), turning left first to Mike 3, then Mike 2 and finally Mike 1 when we exited the TMA. After being warned of an overtaking military helicopter, we were instructed to change to enroute frequency. Wien Information provided a service from there back to Germany as we admired the scenery. There was no turbulence, visibility or much other traffic to consider. Passenger aircraft would have climbed quickly well above us and although we did see some when on the ground, there was nothing to affect us.

We parked up on the main visitor apron, and shortly afterwards a minibus arrived to ferry us to the terminal building. We learned we should have asked for fuel before we shutdown, so started up and taxied to the fuel pumps where the same helpful staff dispensed fuel and followed us as we taxied back to parking. You can either refuel self-service if you can pay with a BP card or with assistance then pay at the terminal with a credit card. There’s no need to radio for permission to taxi within the parking bay/apron/fuel area, which makes life easier.

Once inside the terminal, another pilot who had arrived at the same time helped us locate the GA office to pay our landing fees. It is quite well signposted, but needs to be – hidden away upstairs and around a couple of corners.

This is the site of the major Aero-Expo European aviation show which fills up the large exhibition areas on the other side of the field. Perhaps its not quite as large as it used to be, but it can easily take days to walk around and see all the exhibition stands and other activities. But that’s a few weeks earlier, so today activity was generally pretty quiet. Nonetheless, this is a full regional airport with flights from BA, Easyjet and others, so there was plenty of choice for lunch in the main terminal building.

Next, return to England via Troyes and Jersey…