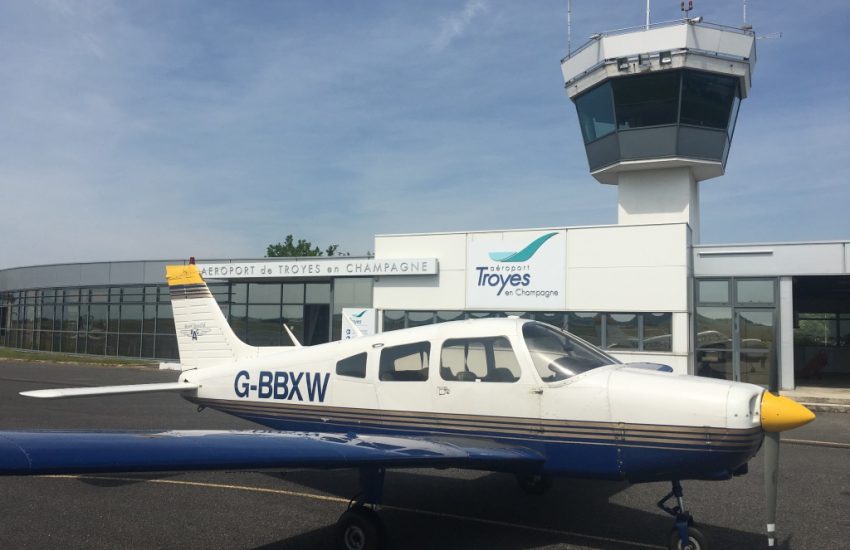 Yet another flight plan required for the second international flight of the day, from Friedrichshafen in Germany to Troyes in France. No PPR required though. Again, I drew up what I thought was a reasonable route and filed through SkyDemon. A few minutes later I got a call from the German air traffic regional centre, advising me that I really should have a couple more reporting waypoints than I’d put in – direct certainly wouldn’t do. This was quickly and easily resolved by verbally agreeing on SONGI and AMRUP which the assistant entered directly into the system. There’s no way of a filed flight plan being exported or emailed back to the pilot, so I just noted those two points and updated my Skydemon route.

At the hold ready for departure, the tower asked for my preferred departure route. I had expected to be allocated one, but selected the Northerly route (reporting point November) which was granted. It’s not often you have an airship in your sights at the hold.

The tower activated my flight plan by default and released me once clear of their controlled airspace. Once again we were back to helpful Langen Information for a flight information service.

We needed to transit some Class D north of Bale-Mulhouse, and this ended up being trivial. Bale approved our transit at 6000ft without any particular routing restrictions. We saw an airliner pass well below us but little else. There was then a little confusion as we got bounced around between frequencies for Strasbourg and Bale. It then turned out that the Luxeuil TMA which we wanted a transit through was closed, so no permission was required. Then on to Seine Info who looked after us until almost at Troyes. The FISO in the tower there advised no other traffic and we positioned avoiding the built up areas for a straightforward left based join to land. There was a fair bit of headwind, I recall 14-18 knots or so, which made the landing roll short. We both spotted the airfield later than expected, thinking it was further away from the city that it was, so that made for a steeper approach for which the headwind helped.

The fuel pumps there are self-service with standard credit cards, and thus relatively easy to use. The pompiers logged our details for the landing fee, told us we could pay the next day, and telephoned for a taxi into town.

The weather didn’t look great for this last day of flying, and we did seriously consider postponing our return by a day – we both had some flexibility to extend our trip for another day and the aircraft would be due for servicing on its return anyway. After studying the weather, I concluded that at lower levels (up to 5,000 feet at least) there would be no icing problems and that there was a wide gap in the front which was less pronounced. We refuelled again to full, having previously intended to land with reserves at Jersey to benefit from the cheaper fuel there. Today we’d rather have more contingency and be able to allow for a less direct routing.

Since this would be an IFR flight, I filed IFR and logged this as commander while handling the radios and navigation although John actually did the flying. I almost submitted this using Autorouter, which took a little time to configure since I hadn’t filed IFR with this aircraft before. Instead, I spoke directly to the regional ATC centre who were extremely helpful, entered the flight plan directly into their system and gave me confidence that the route I was filing was reasonable and correct.

Troyes passed our clearance before takeoff, issuing a squawk and next frequency. We departed with around a 1500 foot cloudbase and made early contact with Seine. Our routing was initially a little further south than I would have liked, but understandably took us clear of the busier airports to our west. We were in and out of cloud for a time, often between layers and quite comfortable.

Once clear of the south of Paris, we were given a more direct routing to the north west towards BOBSA, effectively a shortcut which would normally be ideal. However this did bring us towards more unsettled weather, so I asked for and was granted a direct to another waypoint GONEK that put us on a westerly track and would get us away from the worse weather. After a short time, it calmed down and we were soon back in VMC.

I asked for a direct to our destination, which would be outside controlled airspace, and was given a Standby. After a few minutes with no further updates, I asked for a radio check but no reply. So we changed to the area information service, which wasn’t aware of our flight but did give us another frequency to call and we were able to proceed as planned. Once with Jersey control and able to see the island well before we crossed the coast, I asked for joining instructions. They still had us as an IFR flight and offered a vectored ILS which we accepted gratefully. All very well flown by John who had by now been hand flying for over 2 hours.

Each time I visit they seem to have improved the facilities here. The fuel truck had arrived to ask if and how much we wanted before we had disembarked. The airport now has LPV approaches (was only LNAV before) for both ends of the runway. The Aeroclub office is downstairs by the pilot entrance, making it easier to move about inside the building thereafter. I filled in the mandatory GENDEC immigration form on their computer, paid landing fees and fuel (benefitting from AOPA discount) and we walked upstairs to the lounge for a snack lunch.

The final leg home was planned with a direct a route, passing through the Portland Danger Areas and Bristol Class D. There was a good tailwind, so the time should be relatively short. After departure, Jersey Control routed me towards Cap De La Hague, but relatively quickly released me on my own navigation to depart to the north as I pleased. Initially suggesting we spoke with Bournemouth Radar, I Freecalled Plymouth Military for a transit through their Danger Area which was granted. There had been a lot of activity earlier in the day for the D-Day commemoration, but I heard nothing else on frequency. Bournemouth, then Bristol for a transit, then back to Gloucester for a direct downwind join on runway 22.

Taxiing back to the hangar after such an amazing trip was a pleasure. Five countries, eight flights in five days. This is what all those years of training and practice have been for. John commented that it had changed his perception of what a long flight was – most of his trips have been an hour or so maximum, while we averaged more than double that. I’m still chuckling that we managed to coax an elderly 150hp aircraft up to 9,500 feet. Perhaps we should strap some skis on it for our next visit.