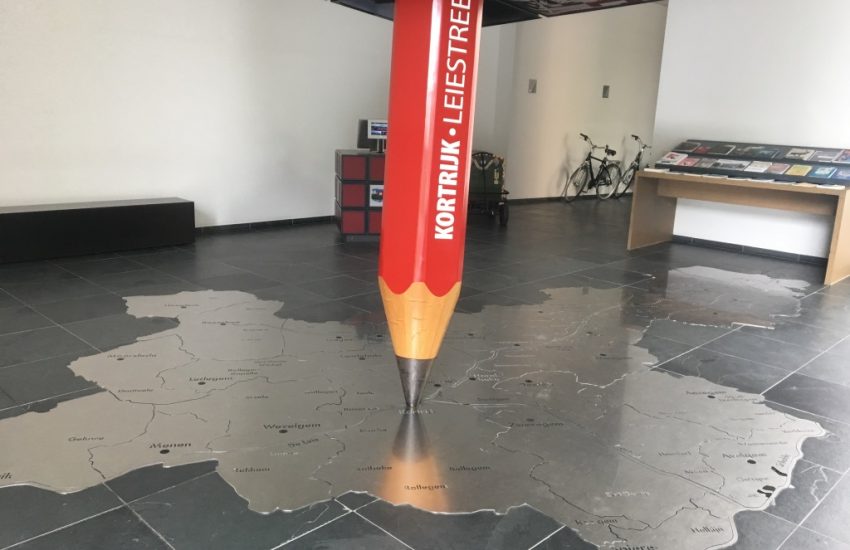 The original plan for the weekend was to fly up to Aberdeen with my family to visit relatives. I’d planned to fly to Duxford to pickup my daughters and take them there in the TB20. What both I and my family have learnt is that with small aircraft, weather can often disrupt good intentions and you have to have a Plan B (and maybe also Plan C, D and E).

There was a strong wind warning in the forecast due to Storm Miguel, and very heavy rain to the north so it became clear at an early stage that Aberdeen was out. Everyone was still keen to go somewhere for the weekend, and quite liked the idea of somewhere abroad. I thought Antwerp in Belgium would be good but later changed that to a runway more in line with the strong winds that were forecast – landing in a 30+ knot crosswind didn’t seem like a sensible choice.

Kortrijk is in central Belgium, and whilst not perhaps everybody’s first idea of a tourist destination, has plenty of good lifestyle attributes that you associate with that country – beer, chocolate, good food and hundreds of years of history – what’s not to like.

Sadly Cambridge airport is now closed at the weekend for visitors, but I’ve found that Duxford is a viable alternative. It’s the main based for the Imperial War Museum which I’ve joined as a full member. I visited there recently when visiting my daughter at the weekend. The landing fee is less than Cambridge but there is no instrument approach, controlled airspace or full ATC. It’s got two runways, grass and paved, good FISO and lots of activity going on. The telephone briefing during PPR reminds visitors to avoid an overhead join and instead from the west join directly downwind via Royston.

Our outbound flight into Duxford was uneventful but quick due strong tailwind – average groundspeed 157 knots, max 191. I kept below the cloudbase at around 3,500 feet, routing just south of Daventry VFR, talking with Brize until quite late. There was little else on frequency. Cranfield aren’t open at weekends, so there was a very short gap before I contacted Duxford directly. A downwind join rapidly decelerated groundspeed onto final, which seemed very much slower – I think I was about 130 knots downwind then 65 on final. Wind was 14 gusting 24, but it was a surprisingly gentle touchdown. A backtrack to park on the Eastern apron, while the tower confirmed they had my details and flight plan for subsequent departure.

Unlike most large airports, you are advised not to wear yellow jackets to avoid being questioned by visitors about the museum (e.g. where the toilets are etc.). Payment for landing fees is made at the main entrance, where we conveniently met our passengers. Quick toilet stop, then walk back to the aircraft for departure. The lifejackets and headsets are now familiar to everybody, so after a quick pre-flight we are ready to go.

Procedures often vary slightly at different airports, and perhaps I should have called for start rather than for taxi because I was departing on an IFR flight plan. This gives the FISO time to phone up London Centre for my IFR clearance. I also inconsiderately parked for my run-up blocking another aircraft, but did offer to move out of the way when we both declared ready at the same time. My clearance was offered as I taxied out to line up, but being single pilot that had to wait. It was a very straightforward clearance – remain outside, next frequency and squawk code – and then we were off.

At the FISO’s suggestion, I contacted Essex radar when still downwind at 1000 feet. Radio reception was quite poor and I had to “say again” to be sure I heard correctly. Although the filed and validated IFR flight plan had me climb out directly overhead Stansted, the actual routing was a far more sensible heading generally east, remaining north of controlled airspace, until they’d figured out what to do with me. I would have preferred to have been actively tracking towards KEMPY (ideally as part of my validated flight plan, but this wasn’t accepted when filing). I was given a heading of 090 and then 085, climbing initially to 5,000 feet (so below controlled airspace with a traffic service). I was asked what level I ultimately required, and I asked for FL80 which I thought would keep me above the cloud layer (it mostly did).

The routing we were given was very satisfactory, taking us north east of Stansted and then south over Earl’s Colne at FL80 ontrack DET (Detling). With some nasty looking cloud build up directly ahead, I was about to ask for a left turn to avoid when I was pre-empted by a new heading. Some 10 minutes later once clear of Southend, we got a direct KONAN by which time you know you are clear of London airliner traffic.

We were belting along with a 200 knot groundspeed by now – not turbulent or uncomfortable, just quick (TAS airspeed was 140 to 150). We flew just south of Manston – ideally located for South East England’s freight airport, now closed and owned by property developers but in the throes of a planning enquiry.

Visibility was good, we were above a broken cloud layer and could see the French and Belgian coasts before we coasted out south of Margate. London switched us over to Belgium Control well before the FIR boundary and we got our subsequent routing KOK, MAK, RNAV24 routing as requested. There was only a short period where we were given a heading to separate us from commercial traffic. I did not have to ask for a descent, this was given in stages in good time.

Kortrijk is unusual in having an RNAV LPV approach with only a Radio service on the airfield. I don’t recall if I was explicitly “cleared for the approach” but there was no doubt of my intention. The simple operational rule implemented by Belgium Control is that only one aircraft can be flying the approach at any time. I was advised that radar service terminated below 4000 feet and I should contact Kortrijk radio. The procedure requires you to be down at 2,000 feet by the final approach fix, so it was a quicker that normal initial descent. But having turned into the wind, our ground speed dropped dramatically.

Kortrijk Radio were expecting us, providing runway, wind and known traffic information – basically there was nobody else flying today. Perhaps that was because the wind was 14 gusting 31, but it was pretty much straight down the runway. It was a little turbulent on short final but surprisingly gentle touchdown and I only used one stage of flaps.

The airport has immigration police permanently stationed, which with no PPR makes this extremely accessible and useful. They were both very professional, thoroughly checking our passports, as well as being friendly and welcoming. We met no other staff at the airport which is modern, clean and well designed. There is an unmanned “C” office where you enter your details and later someone will send you a bill in the post. There is also a self-service fuel pump which accepts credit cards. I did struggle with the computer system which didn’t accept my future departure time – I suspect you should only fill this in when you are leaving. The Belgian keyboard layout is also a gotcha for foreigners like me.

There are some very nice hotels in the city but I had booked one with free late cancellation at the Expo centre which was very comfortable, although quiet and doesn’t serve food at weekends. There are plenty of bars, restaurants and attractions in town which were worthwhile. This is by no means a tourist destination like Brugge, but there is plenty to keep you interested. The tourist office could not have been more welcoming and enthusiastic. Unknown and unplanned by me, the city hosted its SINKSEN family festival weekend with live bands and other entertainment.

A local “attraction” is the seven bridges over the main river, each with their own distinctive design, deliberately chosen to add some variety. There’s also the town “beach”, which is more of a grass park. The Sunday market was huge with a wide range of stalls. I thought the performing hairdressers (to disco music) were probably the most unusual and unexpected sight.

Our taxi back to the airport next day took the normal route, but got caught out by a street market so we had to walk the last kilometre.

We were almost exactly on time – filed for on the hour, took off at 3 minutes past. Kortrijk Radio passed on our clearance: MAK1A departure, climb not above 3000 feet, next frequency and squawk code. They also warned that parachuting was active at the airfield to the north (the MAK1A SID flies around that). With only a couple of other aircraft around, we took off and fairly quickly contacted Belgium Control. Once identified, cleared to FL80 with our filed routing. At MAK we got a shortcut to COA (It was said as Costa), then after coasting out, Belgium switched us over to London Control.

London initially suggested that we could expect a LOGAN1A arrival, and it took me a minute or two to figure out this was a Cambridge arrival procedure, which seemed reasonable. They then asked if I’d be happy with a direct route to Duxford, simply descending out of controlled airspace when we coasted in and thus avoiding talking to Essex Radar. Given the good visibility today I thought that satisfactory, so we were cleared CLN (Clacton) direct Duxford.

As my SkyDemon glide range indicator crossed the coast at Clacton, London cleared me to leave controlled airspace in the descent. I did keep the mandatory 500fpm but no more, to ensure I remained within glide range. As we passed below 5,000 ft, “service was terminated” and I was told to contact London Information.

I switched to Duxford about 10 miles out and was able to position for a straight-in. The wind was only about 10 or 15 knots so a much simpler landing that the previous day.

While we watched a few run and breaks from a Spitfire and others, there was time for a quick cup of tea, toilet break and to pay the landing fee before we said our goodbyes and mounted up for the last flight of the weekend.

A glance at the rain radar wasn’t heartwarming – definitely some nasty looking and quite intense rain clouds in the vicinity of our destination. But I still had 3 hours of fuel left and my alternate would be Oxford, one of the few GA airports still open after 6pm. My departure this time was less eventful and more orderly than the previous day.

I spoke with London Information again for most of the trip, and they helpfully relayed me the updated METAR issued at 1750 local including runway in use.

It was about a 40 minute flight back, fairly smooth. The rain clouds were clearly visible but we didn’t have to fly anywhere near one. It was a straightforward self-announced overhead join, since we arrived shortly after hours. One of the Cotswold Aero Club members, working in the hangar on his aircraft, kindly helped me push aircraft in and out to put CORB away.