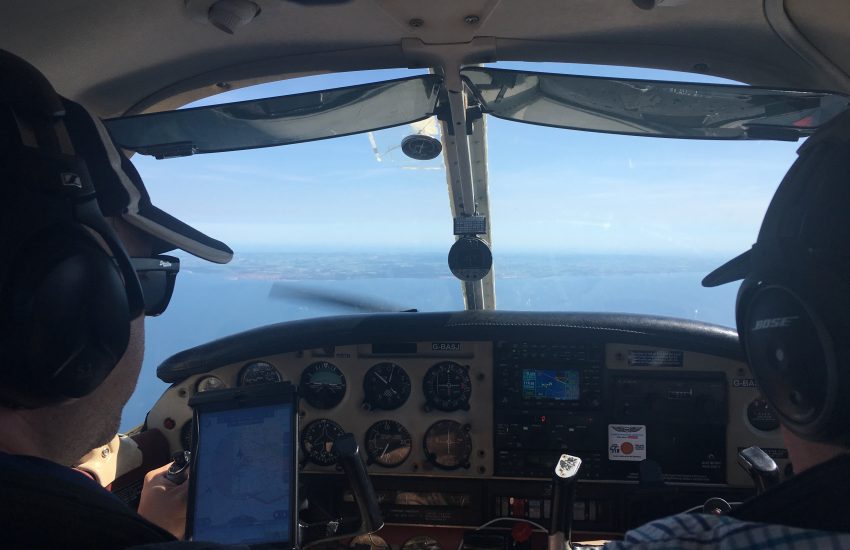 As my total flight time clocks over 1100 hours and my Unrestricted Flight Instructor rating enjoys its first anniversary, I thought it a good time to reflect on what its been like to have joined the ranks of Instructors. I’ve logged 360 hours of instruction to date.

In 2016 I qualified as a CRI (Class Rating Instructor) and logged about 50 hours instruction in the two years thereafter. I championed cross channel trips with club members and others, as well as the usual club checks and refresher training for both new and existing members. The FI rating gained in 2018 allows me much wider flexibility in training ab-initio students (ie those who have never flown before), through to night ratings. Later last year, I also qualified to instruct for instrument ratings (IR and IRR), and have done both.

Several pilots have asked me whether they should consider becoming instructors, and what it’s been like.

I’ve very much enjoyed the sheer variety of training involved, both in terms of syllabus – from the very first trial lesson, where the pilot may not know how to read an altimeter, through to flying instrument approaches in bad weather with some of the instruments deliberately switched off (where the pilot needs full command of instruments and flight controls available). There has also been a huge range of personalities, ages and abilities. Every student is unique and presents their own challenges and opportunities. It’s very satisfying when the culmination of a series of lessons results in a first solo, or first solo landaway. Skill test results are as much of a check on instructor’s ability as they are of the candidate’s.

What to consider when seeking to become an FI

Where and what are you intending to instruct?

You might think that with a shortage of FIs it will be easy to get a job as one when you qualify. While that may be true, it might not be the one you want or expect. Discuss with the CFI of the flight school/club where you want to be employed, check that they would employ you and on what terms. Ask if they have any preference as to which training school you use. Ensure they will support you towards becoming unrestricted (which requires 100 hours of instruction and 25 supervised solo signoffs). Ask if there are any extra qualifications or ratings that would be helpful. I managed to fit in the Night Rating FI sign-off as part of my FI course, which was much easier logistically than trying to add that later, and has proved useful subsequently.

Fully qualified Flight Instructors are most sought after

You can instruct with just a CRI and get paid for it as I did initially. It only requires about a week’s full time flying training/groundschool (involving as little as 3 hours dual flight time and an Assessment of Competence/checkride). With that amount of training, you clearly won’t learn as much as the full six week FI course. It’s intended for club checks, differences training and SEP revalidations but doesn’t cover trial lessons. Some CFIs have told me they don’t want CRIs on their staff, preferring the flexibility where any instructor can perform any task. They also query whether CRIs should be paid as much as FIs, and how they might fit in. Other CFIs seem to manage to find a niche for them and make good use to augment their full time instructors.

Those who have taken the full FI practical training course, about six weeks full time, and passed the Assessment of Competence (a flight test plus some ground questions/presentation), can instruct towards the LAPL licence only. Post-PPL training, revalidation, renewal and checkouts are allowed as a CRI, which is typically issued at the same time. This may be enough for some and there are certainly schools employing full time instructors on this basis.

It’s necessary to pass the CPL theory exams (or ATPL which are somewhat more comprehensive) to become a fully unrestricted FI. The main additional privileges being to instruct for the PPL rather than LAPL, and to allow other ratings to be added, such as for Instrument Instruction.

Restricted flight instructors, whether they have passed the CPL theory exams or not, must always be supervised by a fully qualified unrestricted instructor at a flight school. Sometimes this supervision can be done remotely (there is nothing in the regulations that states otherwise), but clearly it helps during your probationary period to have some guidance and mentoring.

There is a myth that you can’t get paid for instruction without additional qualifications. All instructors can be paid, CRI, LAPL only, unrestricted FI. The amount is whatever is agreed between student and instructor (or the flight school).

The shortage of FIs has led to some flying schools offering to subsidise or even pay for the FI course in return for many hours of instruction. That is common in French flying clubs but relatively rare in the UK. Instead, expect to pay for the training (including any overnight accommodation), theory exams, tests and CAA licence fees. Thereafter, the money comes in slowly because instructor fees are comparatively low.

While instructor fees are charged by hours of flight time, you can easily spend two or three times that long with a student. Rates I’ve been offered vary from as little as £14 to £65. Somewhere around £30 is probably the average today for PPL instruction, with instrument instruction commanding £45 to £65.

This contrasts with the US, where flight instructors charge for all time spent with students, from the moment they walk in the door until they leave. This reduces any incentive to fly more (which would also build hours for the instructor, if they were motivated to do so) and instead focusses on the best use of the time in the air. I’d quite like to see that approach here in the UK but there is strong pushback from flight school operators who think that would raise the cost of training beyond what their customers could afford.

I’d like to think that by making more use of expensive flight time, through better ground briefings/debriefings and use of lower cost flight simulators, the total cost of training cost is reduced. Anyway, since I can instruct without so much pressure to make money, I’ve tended to allow more time on the ground per flying hour and thus created more value from time in the air with students.

I like to plan my schedule well ahead, look forward to holidays and other activities. That’s been even better while I’ve been self-employed. Instruction has been much more tactical, changing on a daily or even hourly basis. The key factors are weather (more so for PPL rather than instrument students), aircraft technical issues (these older aircraft simply breakdown more often) and student availability.

Some training is done intensively over a week or two with a single student. This is how CB-IR and IMC training works, either with blocks of about 3 days or longer. Individual students for PPL may want whole days for their landaways and qualifying cross country. Weather and personal issues can mean these get cancelled or postponed. Most students are quite thoughtful and considerate. I quite understand if someone has to delay their training for personal reasons and gives adequate notice. It’s more perplexing when one or two whole days are cancelled at very short notice, sometimes with just a text message. The answer is to be able to backfill this deadtime by contacting other students who have the flexibility to do so, but thats not always possible.

Weather is inevitably a limiting factor, especially at certain times of year when mist and fog limit visibility. Instrument training has fewer constraints but there are still times and conditions which aren’t flyable.

The UK PPL training industry makes relatively little use of flight simulators (with a few exceptions), so there is less that can be done on the ground during bad weather other than leaving students to study for theory exams. I think this is a missed opportunity and did visit one club that has a really good simulator which keeps students active during the bad weather winter periods.

Many friends say to me that I must be getting huge amounts of airtime and more than satisfying my urge to go flying. While that’s very true, it seems to be easy to get into a mode where you only ever instruct and only ever fly within a small radius of your home base. I’ve been keen to continue to fly longer trips, go away for weekends etc. However, technical issues with my shared aircraft and occasional booking conflicts have limited my adventures in that this yet. Weather put paid to a four day club tour in August. It’s may also seem unreasonable not to be at home at weekends when you’ve been flying all week. I’m beginning to realise that although I’ve logged many hours, I haven’t actually flown an aircraft very much.

Thanks to all those who have helped me on my journey

I’m very grateful for the support, advice, mentoring and feedback as I learn the craft of Flight Instruction. You all know who you are. And also thanks to those customers/students who have shared, and hopefully benefitted, from spending time together. I’d hope everyone has become safer, more confident and more capable than when they started.