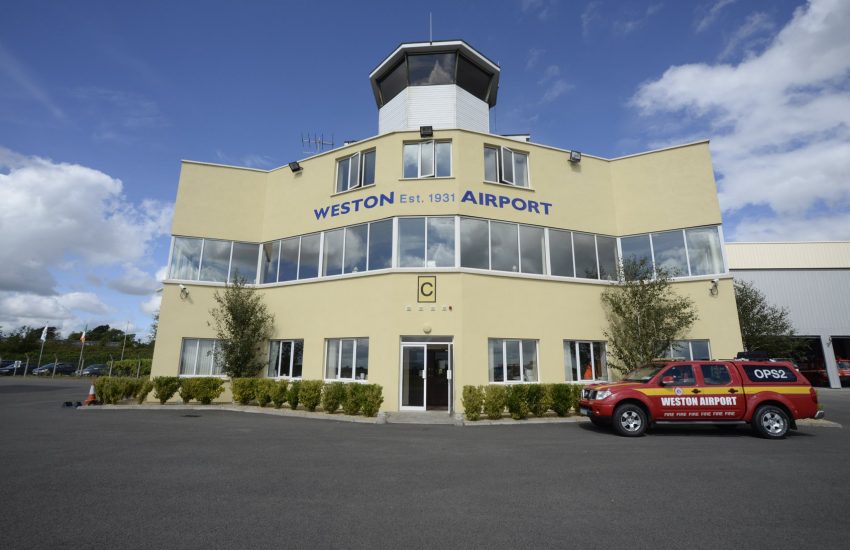 While instructing is very enjoyable and rewarding, sometimes you feel the need to fly somewhere new. I’d been to Le Touquet earlier in the week conducting a Cross Channel checkout for a new club member on what proved to be about the only good weather day for flying. Today’s weather also indicated heavy rain all down the east side of the country, but clear to the north and west. My TB20 co-owner had postponed his flight for that, leaving it free and making it an ideal day to visit Ireland from Gloucester.

My first stop would be Weston Airport in Dublin. This is the capital’s main GA airport, operating since 1913, and sporting an Art Deco terminal building reminiscent of Shoreham – it’s also got a great cafe inside too.

Researching the details, the paperwork for immigration, customs and Special Branch seemed a little confusing. From the UK viewpoint, you must normally notify Special Branch 12 hours prior to departure which can be done by submitting a GAR form through SkyDemon, OnlineGAR or the new Border Force portal. I used the first method which resulted in the form being sent with return flight times rather than outbound ones for some strange reason. Logging in directly to OnlineGAR and resubmitting fixed that.

The notice periods for arrivals into Ireland seems more complex and confusing. This helpful explanation on the Flyer Forum clarified that the Irish Customs authority can’t directly impose restrictions (as found in Belgium and the Netherlands), but indirectly achieve this through individual agreements with each airfield. No agreement means no permission to accept international flights. The problem is that arrangements vary, but typically state 24 hours notification before arrival, with 48 hours for non-EU crew or passengers. In practice I understand that a phone call might achieve shorter times. My email to Weston with Irish GAR form attached was approved with a reply within a few minutes – you can’t ask for better than that.

I considered whether to fly IFR or VFR. Autorouter came up with an almost direct route, of which the first half was VFR outside controlled airspace. This involved twice the time over water (about 45 minutes) compared to my preferred shorter water crossing route via Anglesey (about 30 minutes). Weston does have an instrument approach (several VOR based ones) which I felt I could request if needed, but the good weather encouraged me simply to file VFR and expect to route low level up the river over the city for a direct arrival. SkyDemon is quick and easy for this task, especially if the aircraft and pilot details are already set.

After topping off the tanks, and wearing my lifejacket, I departed on time at 09:30 heading north west towards Snowdonia. A thin layer of cloud became thicker, and I climbed initially to FL65 to remain VMC on top, then later to FL85, in conformance with Part-SERA altitudes when flying westwards.

Coasting out just south of Caernarfon, the cloud vapourised and I thought I could almost see Ireland in the distance. I was talking with London Information at that time, one of their very few customers because it was early in the day. They suggested I try to speak with Valley (a military base on Anglesey which offers LARS radar services), but as expected they were closed for the weekend. London relayed a dedicated squawk code from Dublin Information and I changed across shortly after.

The comfort blanket of flying so high and remaining in glide range of land meant I left it too late to commence an early and gentle descent. In retrospect, once out of glide range of land, it doesn’t really matter so much although altitude does give you more time to diagnose and address any technical problems as well as improve radio range.

It quickly became clear that a transit through the Dublin TMA with a gentle descent wasn’t going to happen. I was instructed to descend to not above 4,500 ft before entering and continue my descent to 2,500ft remaining outside after I’d cleared it. That required a somewhat enthusiastic descent rate – I don’t like to reduce power below 15 inches without the gear down partly because the gear horn goes off (it thinks I’m try to land gear up) and partly because I suspect it might shock cool the engine unreasonably. A forward slip at 160 knots also doesn’t seem a good idea to me and putting down the landing gear in the middle of the Irish sea just to slow down also feels inappropriate.

My clearance was later changed to be down to 4,500 ft 6 miles before reaching controlled airspace and to expect a clearance of 1,700 ft within the CTR. In retrospect I should have considered making a few lazy orbits to lose height at a more reasonable speed, or better still started the descent as soon as I coasted out. In fact I managed to lose 7,000 feet in about 15 miles – normally I allow 4 miles per thousand feet at 120 knots, so that’s double the rate, and remained outside the TMA completely.

I was instructed to route direct to KLY, an NDB to the south of Dublin, from which I would be routed north west towards the city at low level. I confess my direction tracking wasn’t spot on at first, likely due to being focussed on the rapid descent, and probably due to flying on heading mode rather than NAV mode on the autopilot. It was quickly corrected well before entering controlled airspace, and I did also tune in the NDB as a backup.

Once down at about 1,700 ft and a few miles south east of Dublin, I was changed across to Dublin Tower who quickly granted clearance into their Class C airspace via the Pigeon House Chimneys and Palmerston Roundabout as expected, with an altitude restriction of not above 2,000 ft and to remain VFR. The landmarks are really very easy to spot, with Dublin Airport itself clearly visible to the north. The track to follow is fairly critical with danger areas below and other controlled airspace to the south. I was called out as known traffic to arriving airliners landing on runway 28.

After a seamless handover to Weston Tower, I was told to report final with one other aircraft downwind instructed to follow behind me. There’s a larger military airport just to the south, Casement, which you might not be the first to mistake for your destination. The runway is more than long enough and well maintained, I self-parked on the main apron and walked into the terminal building.

The cafe upstairs is very swish with friendly staff and offers a comprehensive menu. The view is panoramic, although there was relatively little activity when I was there.

The PC12 on the apron looked wonderful next my much smaller aircraft.

A brief 2 minute video of the VFR arrival (8x speeded up) shown below.

For another perspective, Peter from EuroGA flew to Weston from Shoreham in his TB20 not so long ago, arriving IFR rather than VFR. His trip write-up can be found here.