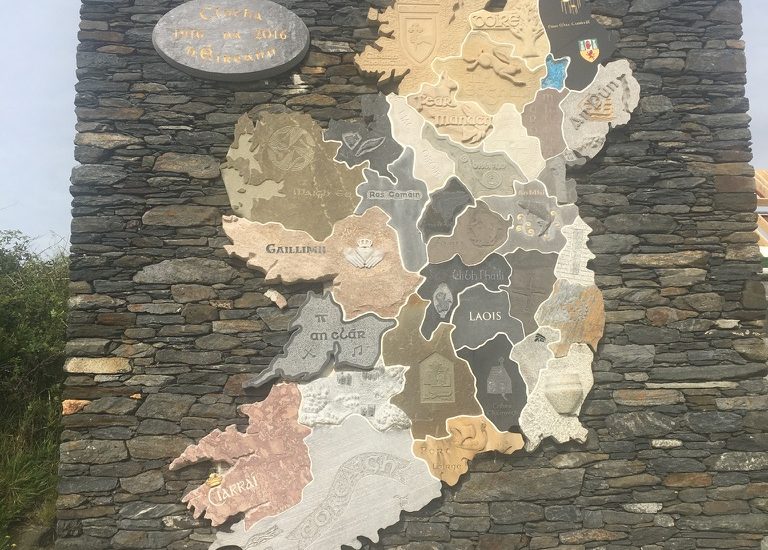 Voted number 1 scenic airport in Europe, the tourist marketing photos of Donegal Airport are stunning. What they don’t mention is that it rains at least ten months of the year and it’s quite a tricky airport to land at in bad weather. It’s also nowhere near Donegal city. But the scenery really is stunning especially when the sun does come out and the locals are very friendly and welcoming, so well worth a visit.

Our flight from Derry to Donegal today would be a short one, just 25 minutes or so, crossing the international boundary by heading due west. The high ground directly on track features Mount Errigal at almost 2,500 feet, so 4,000 feet would be a reasonable minimum safety altitude. The pressure setting at 1014 was very similar to standard 1013, so no concerns when flying at flight levels. As with the rest of the UK, transition levels are a confusing mix and not aligned – Derry is 3,000 feet while Donegal is 5,000 – it would be so much more sensible and safer to set that at 18,000 feet throughout as they do in the USA, but would require many changes to procedures and co-ordination with other countries that I despair it will ever happen.

I had PPR’d with Donegal airport ATC a few days earlier, emailing my Irish GAR form. They had also asked me to fill in Irish Passenger Locator Forms, which since 25 August have gone online. My research indicated that since I was entering from Northern Ireland these weren’t required but I submitted them anyway. The Irish online form is considerably simpler and easier to complete than the overcomplex UK one.

I filed an IFR flight plan through Autorouter – there are no airways here, so it was a simple direct to destination at FL40. I also used the relatively new UK government GAR form portal to submit a GAR (strongly recommended but although not required for Immigration/Customs remains mandatory for the Police due to the Prevention of Terrorism Act 1976).

Reviewing Donegal Airport plates, it does not have radar service and only non-precision instrument approaches so there is no glide slope. The more commonly used approach from the north for runway 21 has a localiser with a minima of 340 feet AGL but runway 03 only has an NDB. I was able to read the METAR before departure which looked well within limits.

I was handed off to Shannon but couldn’t raise them on the radio. Apparently they could hear me but not vice versa, even with the squelch turned off – their coverage doesn’t extend down to 4,000 feet in that area. So instead Derry arranged for me to contact Donegal airport directly which worked well. They were expecting me, there was no other known traffic and I was cleared into their Class C as #1 to land pretty much flying any routing I wanted. Report 10 miles was a good clue as to where I should aim to intercept the inbound track and I chose to fly north west but did not start descending until beyond the coast. That left me a little high and required a faster descent rate to reach the platform altitude at the final approach fix.

I flew the approach manually with careful checking of the altitudes at each mile. I’ve done this a lot recently but almost entirely by sitting next students on an approach I am very familiar with – it’s quite a different thing to do it yourself in more unfamiliar territory. The ground and surrounding terrain came into view at about 800 feet but there was a single cloud directly between us and the runway which obscured the lights until about 500 feet. The minima was 370 feet so pretty close. The lights suddenly popped into full view and I was well placed to reconfigure for an easy touchdown. It’s quite a long (1500m) runway and well lit which made it easy.

Did I mention it rained here? It absolutely pelted it down as soon as we got out of the aircraft – I wondered if the rain had arrived a few minutes earlier we might not have been able to land but it might well have been the pesky cloud that delayed my sighting of the runway lights on approach. I got soaked extracting the luggage and putting the now very wet aircraft cover on. The staff were cheerful and quickly escorted us through into the terminal when we were ready.

Enterprise hire car was waiting for us. Of the three car hire companies I used this week, they were the only ones with free no-nonsense cancellation terms due to CV-19. By now the sun had come out and we headed off for a tour of the area. The windy and sometimes steep roads are designed for slow, scenic tourism so it takes a while to get anywhere. You’ll find tractors and sheep strolling around on the roads but very few lorries.

Just in case you thought it might be nearby, Donegal airport is nowhere near Donegal City – it’s a good hour’s drive away. It used to be named Carrickfinn (hence the airport code CFN) and serves the county rather than the city. It has a novel interpretation of the acronym VFR (Visiting Friends and Relatives) which explains the frequent flights to Glasgow. More recently it supports helicopters serving the oil and gas fields offshore.

With more people choosing to work from home, the relatively low cost of housing combined with easy airport access might be attractive for some. High speed broadband would also be critical, and we saw that being installed by Imagine which is using 4G and 5G to offer up to 150Mbps service for 60 Euro/month capped at 1 TByte consumption.

We stayed at the popular Caisleain Oir Hotel (Golden Castle Hotel), just a couple of miles away from the airport, which is highly rated. Although quite busy, we were rewarded with window seats with a stunning view over the loch outside, watching the sunset during dinner. The local fish was fresh and tasty, and the service outstanding.