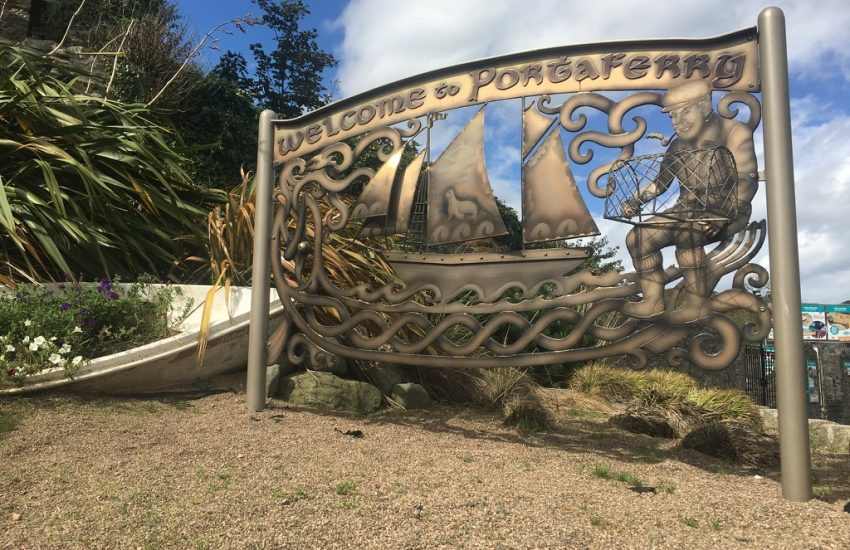 Our third and final stop during our week’s tour of north Ireland was to be Newtownards. This would give us easy access to the tourist area of the Ards peninsula. Ulster’s main GA flying centre is based here – it really is the place to go if you want to learn to fly in the province – and it seems quite a thriving club. The Cloud Nine restaurant was very busy on the day we left, perhaps because of so much football being played nearby.

The weather for our flight from Donegal was going to consist mainly of cloud – did I mention it rains here a lot? – and I wasn’t certain of being able to land at our primary destination. The METAR showed 1200 feet cloudbase at Belfast City which was promising. I filed the main Belfast Aldergrove International airport as my alternate, and phoned the handling agents there (Woodgate) to check it would be OK to land and park there if required. I did also telephone Newtownards and spoke to someone who said they’d be open and manning the radio although there wasn’t much local flying taking place.

Since there isn’t an instrument approach at this airfield, my plan was to route to the southern end of the lough and descend through the cloud over the water and approach VFR. There isn’t much high ground in the area except for Scrabo Tower, a lookout point to the west of the airfield, which is 830 feet tall. If I wasn’t visual within 4 miles south of the airfield, I’d climb back up and request an instrument approach into Aldergrove.

Departing from Donegal there is Errigal mountain at almost 2,500 feet so I thought it best to turn west on departure and make a slow climbing turn to return overhead the airfield before heading east. With no other traffic around, I was cleared for take-off with either left or right hand turn and flew as planned. We entered the cloud before reaching 1,000 feet and popped out just below our cruising altitude of 5,000.

Once again handed directly to Derry airport, who cleared me through the Class D and passed me on to Aldergrove and then Belfast Approach. My routing via RINGA was approved and the latest METAR for Belfast relayed – still a cloudbase of 1,200 feet. I started my initial descent from 5,000 to 3,000 while in controlled airspace so that I’d be ready for further descent when turning back north. I used the GPS OBS function, initially from RINGA and then inbound towards Newtownards airport. My first glimpse of land appeared to be the west coast rather than the expected east coast of the lough, but it quickly became apparent that it was Reagh Island on the west side. The view quickly opened up and we could clearly see all around, making it easy to position and join downwind to land on runway 15, self announcing my intentions. There is a radio mast (lit with a red light) that seems almost to be on final approach track and some warnings about traffic lights at the boundary fence, but it otherwise it was quite an easy approach.

There was one other helicopter about to start up but otherwise no other traffic. An instructor confirmed my parking spot would be OK and pointed me at the forms to be filled in. This was the most disappointing part of the paperwork exercise on the trip – the local police force require that every pilot and every passenger fill in a separate form for each arrival and departure. So I had to duplicate the details of my flights onto four forms, including far more information than given to Border Force to cross international boundaries – including my profession, date of birth etc. Surely the GAR form should suffice these days and if there really has to be a form, surely it could be streamlined into a single form with an extra line for time of departure and other passenger details on the back. I do wonder if the Prevention of Terrorism Act 1976 that was intended as a measure against IRA terrorism has outlived its purpose and reporting measures should be replaced or removed when Brexit regulations change at the end of the year.

We stayed at the Strangford Arms Hotel in Newtownards – a family run property clearly popular with locals as a restaurant and bar. There didn’t seem to be many other visitors and there are very few parties or wedding receptions being held at the moment. A hire car from Sixt, which has a garage just a short walk away from the airport, allowed us to explore both sides of the Lough and visit a couple of National Trust properties. There remains strong partisan sentiment throughout the area, perhaps most noticeable by the large number of Union Jack flags flown in the streets and murals on house walls.

The snaps below highlight the difference in traffic levels between Northern Ireland and Gloucester.
I’ve filtered out airliners above 10,000 feet.
Saturday lunchtime with nice weather brings out the crowds.

Our flight home was more direct, avoiding the airways. I filed VFR using SkyDemon and submitted a GAR form using the government portal. After departure, I contacted Belfast Approach who opened my flight plan and provided a service until mid-channel when I was handed over to Ronaldsway.

I was cleared to transit their airspace VFR without constraints and heard only one other aircraft on frequency landing on the island. It was comforting to remain with them over the water until the Welsh coast, whereupon I squawked 2000 and listened to but didn’t speak with London Information. I had to climb up to 7,000 feet to get on top of most of the clouds, and despite a bit of tactical manoeuvring still had to fly through a few. Our ground speed was greatly helped by a tailwind, reaching over 170 knots at times, so the higher altitude was a help for that too.

The turbulence remained even after clear of clouds and we began a slow descent directly towards Gloucester. Although there was quite a bit of activity, they were able to fit me in for a direct base join to land. A quick top up of fuel and push the aircraft into the hangar and we had successfully completed our week away.