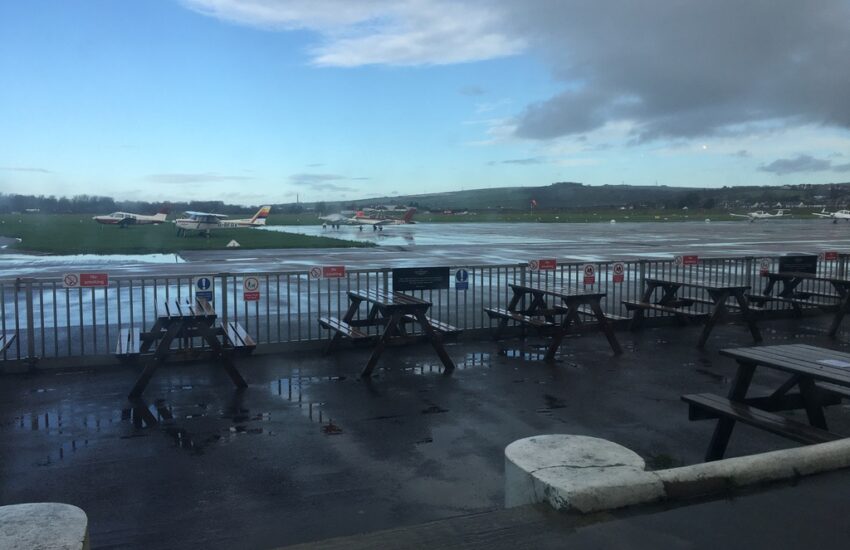 Recent sudden UK government announcements in the run-up to Christmas have been quite shocking and upset many plans. I am fortunate to live in a Tier 2 area and so can still fly, but who knows for how long. Today, I had intended to fly solo to Caernarfon in Wales and even called to confirm they were open the day before, but this is no longer permitted. So today I flew the TB20 solo down to Shoreham, along the south coast to Dunkeswell (near Exeter) and back up to Gloucester.

Having flown only locally for instructional flights recently, I’ve found Gloucester extremely busy at times – there seems to be ever more commercial training in progress there. It’s hard to predict whether the demand will continue into the New Year, after BREXIT and with growing uncertainty about medium term demand for airline pilots. So it was quite a surprise to see just how quiet aviation activity has become elsewhere.

The weather was mainly VFR with a few more intense rainclouds and showers. A southerly wind of 10-15 knots meant that runway 18 was in use, with the larger aircraft and instrument approach active for 27.

I flew south intending to cruise low level down the Severn Estuary. Intense dark clouds required me to thread a vertical gap between the nuclear power station Danger Areas and some heavy weather, and precluded an easy offshore route. Bristol Radar was unusually bandboxed with the tower, where I could hear the same controller authorising runway inspections, clearing GA traffic through the zone while handling the sole commercial airliner on frequency. I requested a VFR transit which was almost immediately granted, North to South, not above 2000 feet.

The view of Bristol emphasised why it was so quiet. The normally busy south-side long stay car park was empty and had been converted into a COVID testing station. Several airbus were parked on stand.

My next port of call was Bournemouth who had NOTAMed their recent change to 8.33 frequencies. They must be having quite a lot of technical work done, since their primary radar was offline and their (very old) ILS is also out of operation. Again a transit was easily requested and quickly granted. Southampton has suffered from the demise of FlyBe and no longer provides round the clock ATC, during which times their controlled airspace reverts to uncontrolled. It’s easy to mistake when those times might be and a few pilots have been caught out infringing controlled airspace when they thought it was not in use. The Bournemouth controller announced that Solent Radar was coming back online “on the hour”, but I elected to remain below 2,000 feet flying north of the Isle of Wight. The views are much better. There seemed relatively little yachting activity perhaps because a few isolated parts near Southampton have been put into Tier 4 lockdown.

I routed between Lee-on-Solent and Bembridge, getting great views of both. Lee-on-Solent (formerly Daedalus) has land in both COVID Tier 2 and Tier 4 areas, so they’ve decided to keep the airport operational, allowing those with aircraft hangared in Tier 2 to fly but closing the cafe and public viewing area.

A NOTAMed zone of two mile radius up to 2000 feet was notified just south of the Spinnaker Tower, but I couldn’t clearly figure out if it was active or not. The text said the ‘VIP HLS site had been withdrawn from no 1 aidu directory, effective from 16 December”. (The AIDU is the military equivalent of the civilian AIP – Aeronautical Information Publication). How any ordinary pilot is supposed to understand what that means, I really don’t know. Adding a few words to say if zone entry is permitted or not would help enormously. With the UK CAA operating a very harsh policy about infringements, I chose to fly outside glide range rather than climb above it in the short gap available once clear of Solent airspace.

Shoreham was operating air/ground radio today rather than full ATC, and the low level of traffic explained why. Perhaps just as well, because my circuit pattern was far too tight, leaving me hot and high for the visual approach – I’ve gotten too used to instrument approaches and the familiarity of Gloucester. The sensible action was to go around and I made a much wider, more leisurely circuit resulting in a much more relaxed second attempt. The terrain to the north east of Shoreham does make it feel that you are much lower than normal but is the correct track to follow.

It was quiet on the ground too. COVID precautions are in full force in both the operations office and restaurant, with a strict one way system, QR code for registration and copious amounts of hand gel. There were just four tables in use and I was amused when one other customer ordered a bottle of beer and was asked what substantial meal they would like with it. It’s been a long time since I’ve been in a pub.

My second leg flew west along the coast to Dunkeswell. The military seem to have mostly gone home for Christmas and all the Danger Areas were cold. I didn’t bother getting a radio service from anyone en-route, just listened in (with squawk codes as appropriate). There are some great views along the coastline there, and I am reminded of some great sailing trips I’ve made along that coast.

I flew south of the Isle of Wight up to the Needles Lighthouse, getting a great view of Freshwater bay and the white cliffs which are highly visible from far out into the English Channel.

There is so much history tied up in this area which provided the inspiration for novels from a French Lieutenant’s Woman, Tess of the D’urbervilles to Chesil Beach.

Dunkeswell was busier than Shoreham, with visitors, students and home based aircraft all taking to the skies. I learnt that this was their last day of opening before Christmas, during which only home-based private aircraft would be able to fly. There are a couple of glider sites nearby to keep an eye out for, and today both were active, but I didn’t see any skydiving.

Again, COVID precautions were in full force, with a one-way system, plenty of social distancing, handgel and protective screens where I paid the landing fee. The cafe was very quiet – only two other tables occupied – but the coffee service was positive and friendly. The size of cake portions here are truly Himalayan, and I felt quite virtuous by not having any.

The trip back to base was fairly uneventful. I did manage to fly low level up the Severn Estuary this time, again seeing heavy dark clouds ahead and flying across the Welsh border. Although travel to Wales is not permitted at the moment without good reason, we can still overfly and even practice instrument approaches at Cardiff or Hawarden but may not land. The rain clouds cleared in time for me to make a VFR arrival into Gloucester, with the controller announcing “Wet Patches, Wet Patches, Wet Patches” regarding runway condition. The low level of traffic allowed me to join left base for 27 (which operates with a right hand circuit) and be cleared to land with no delay. A crosswind of 10 knots was easy to cope with.

Our G-CORB aircraft group has had a couple of changes this year, with two separate share sales (out of five) for different reasons. We’ve not had any change in the group since I joined seven years ago, and I think it will be quite refreshing to have a couple of keen new members. One has already passed half his CBIR theory exams and is looking to progress to a full IR next year. The other has travelled around Europe in his SportCruiser share and is looking to progress onto a more capable aircraft so he can travel with his family. Hopefully, once vaccine programs enable a resumption of more normal travel, we can all make good use of the plane.