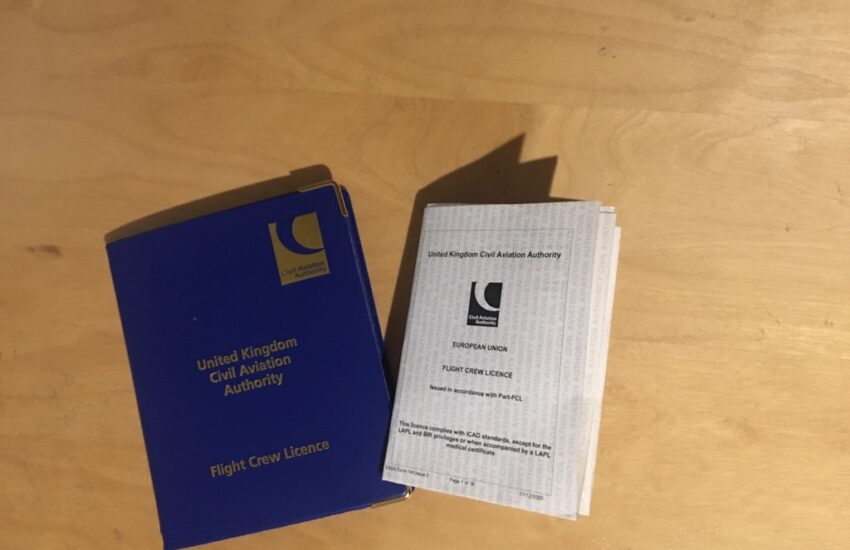 I’ve passed all the theory exams, completed the practical flying course and passed the skill test. You might think that the final step to obtain my CPL licence itself would be relatively straightforward. My experience of both UK and US bureaucracy hasn’t always been slick and efficient, and there were a few hiccups about my experience that I thought worth sharing. My intention is not to embarrass or denigrate any of the staff involved, whether instructors, examiners or administrators, but instead shine a light on some of the administrative processes that are (and are not) working well and provide some hints to those about to jump through similar hoops.

My mistake was not researching exactly which forms I might require for my application and ensuring all were ready to be certified and signed on the day of the skill test should I pass. I also relied on using the online application process and didn’t have the paperwork ready in case I needed to make a postal application.

The CAA is slowly migrating to a full online system for licensing and exams. Currently almost all pilot exams, both private and professional, are administered through their web Portal. Professional licences (CPL/MPL/ATPL) have been handled for a few years. The need to register for PPL e-Exams is capturing all new student pilots. More recently, any pilot applying for a rebate towards an electronic conspicuity device (SkyEcho, PilotAware, PowerFlarm etc.) also needed an account. During the year ahead, all applications for medicals (Class 2 and above) and CPL/IR skill tests will be processed and paid for through the portal. I would expect the remainder of pilots to be migrated in due course, with those flying on LAPLs using Personal Medical Declarations to be the last (because they have no need to tell the CAA of their medical or flying currency status).

The application process for a CPL licence is documented on the CAA website. They prefer that you use the CAA portal, for which you’d already have an account from the theory exams. The webpage suggests that all you need are two course completion certificates for the CPL theory and CPL practical courses respectively. It appeared to be pretty straightforward.

On the day I passed my skill test, my examiner completed the Examiner completed form SRG2130 (CPL Skill Test Examiner’s Report), gave me a photocopy and said he’d email that to the CAA later that day.

I asked him if he could issue a Temporary Certificate (form SRG1100), which would grant me CPL licence privileges immediately. This is common after Instrument Rating skill tests, and I had even been given one on the day I passed my Flight Instructor Assessment of Competence. These documents were originally valid for two months, to alleviate any delay while the CAA issued the licence itself. One of the COVID measures extended this period to 6 months.

My examiner explained that he couldn’t do that because my CPL involved a licence issue rather than just a new rating, and the form wasn’t designed for that.

After encountering difficulties with my CPL licence application, I learned that it is possible for a CPL temporary certificate to be issued. It appears there is a separate, less well known form SRG1100B, which does include a tick box specifically for CPL privileges.

I queried my examiner about it and am very grateful that he took the time to research it further. It appears this form is not well known to all CPL examiners (not just mine). Once aware of it, he promptly emailed me a scanned copy and also posted a copy of the form to me.

This Certificate cannot be used if you don’t already have a Part-FCL licence such as a PPL.

Armed with scans of my CPL theory and practical course completion certificates, I logged into the CAA Portal and attempted to figure out how to make my licence application.

There are a bewildering set of options and sub-options about which licence you can apply for. It differentiates between:

You start to appreciate why running an efficient licence department with so many difficult licence types, regulations, exemptions is really quite difficult.

It was not immediately clear to me whether I should be applying the option for with or without Instrument Rating – my training course and test didn’t involve an Instrument Rating but my licence already has one. Selecting the “with IR” option pops up a requirement to upload an IR skill test certificate, so I think that’s for when you submit both CPL and IR skill tests for licence issue. I opted for the “CPL without IR” which seemed strange since I have one.

There were three major roadblocks that prevented me from proceeding:

My Class 1 medical had expired a few days earlier and the covid automatic extension to the year end had not been applied. This issue alone blocked my application from being able to be submitted.

The portal listed my current ratings with their expiry dates. I have not extended any of my ratings using the covid temporary extensions. My FI rating expiry dates were valid but my IR and IR(R), which I had revalidated with some difficulty in March, as well as my SEP rating were shown as expired.

The third administrative blocker was the status of my exam results. One of my primary drivers to complete the practical course had been to do this before my CPL theory exams expired, three years after the last exam pass. They should all be good until April 2021. Since I have an IR, I didn’t have to retake the Meteorology or Human Performance exams, and my passes had previously satisfied the requirements for my Flight Instructor rating issue.

So it was a disappointment to see my exam results shown as having expiry 18 months previously. It looked to me like the validity of the CPL exams had been configured at 12 months rather than 36, and since so very few pilots take the route that I had (CPL theory then CPL practical), perhaps this is a bug that hasn’t been identified and resolved yet. It also couldn’t cope with my IR and highlighted the lack of a Human Performance exam pass. Whether that was because it thought my IR had expired six months ago is unclear.

The portal requires various documents to be uploaded. I did this for the three forms signed on skill test day, but had overlooked that I’d need a certified copy of my licence ratings page. This is presumably to allow the CAA to update/correct any missing/expired ratings (such as was the case with my IR). I had overlooked the fact that this is required for all licensing applications, so had to ask for my school CFI to do that.

I had brought printouts from my electronic logbook when I started my course that confirmed I had the required flying experience and completed a suitable qualifying cross country of 300 nautical miles with an intermediate landing. With over 1,400 hours I hoped that proving the minimum of 200 hours wouldn’t be difficult, but it involved printing out quite a few pages from my logbook covering much of the previous year. I simply estimated 500 hours cross country experience rather than attempting to classify whether every flight counted or not – I was confident I had done much more than that. These also needed to be certified by an examiner.

Again my learning point was that I should have had that done on the day of my test (or even earlier).

Help from the CAA and reversion to paperwork

The portal indicates that you can email the CAA for help if required. I did this and immediately got an automated response warning me that response times were slow due to CV-19 and I might not get an answer for four weeks. In practice, I got a reply a week later advising me that because my medical had expired the system could not process my application online. I should instead apply using paper forms scanned and sent by email.

I had already booked a medical and passed my Class 1 renewal on the same day, and was able to have my documents certified by an examiner at Gloucester Airport while there. So I prepared a mammoth 52 page PDF file with everything possibly relevant scanned in, compressed it from 36Mb to a manageable 8 Mbytes, and sent it off by email.

My credit card was charged within four days. 15 days after my submission, I received an email pointing out that my logbook proof was insufficient. The CAA website states that electronic logbooks are acceptable but each printed page must be signed by the candidate, whereas I had only signed the first page (although this had also been certified by an examiner).

In the meantime, I had received a delayed package of paperwork from Carol at Andrewsfield who had taken the time to certify and sign each page of my logbook. So I also signed each page, scanned and emailed it back the same day.

14 days later, the CAA posted me out my newly issued licence which reached me five days later. I doubled checked the ratings section which correctly included everything. The ratings themselves don’t change, it just says CPL rather than PPL in the opening section.

So I now have my CPL licence – a single sheet of A4 paper that completes the process. It states it is an EASA Part-FCL licence – those issued after 1st January will be printed as UK Part-FCL licences. I doubt it will make much practical difference to me and will be valid worldwide but only on G-Reg aircraft from January 2021.

I also checked on the CAA Portal. What was disconcerting was that the ratings listed there didn’t match my computer printed licence. Where expiry dates are in the future, the rating status is shown as expired. Clearly there are a few more bugs in that system to be worked through.

During my private pilot career, I’ve now passed quite a few different courses and gained several ratings. I should have learned that it is essential to research exactly what paperwork is required to apply for a rating/licence and ensure that you have everything printed out beforehand and signed on (or even before) the day of the test. There was no real reason I couldn’t have arranged for my logbook, ratings page and passport to be certified at any time during my training course.

When you are focussed on passing a difficult and demanding flying skill test, paperwork issues like this may seem an unnecessary distraction. Some schools will be more proactive in ensuring you have everything you need. Whatever you do, don’t put off applying for your licence. My instructor recalls at least one student who didn’t and then had to retake a skill test (with associated brush up training). Beware that theory exam expiry dates are linked to the date of licence issue, not the date of the skill test.

I’ll report back next year when I revalidate my IR on whether this is easier to administer through the Portal or not.