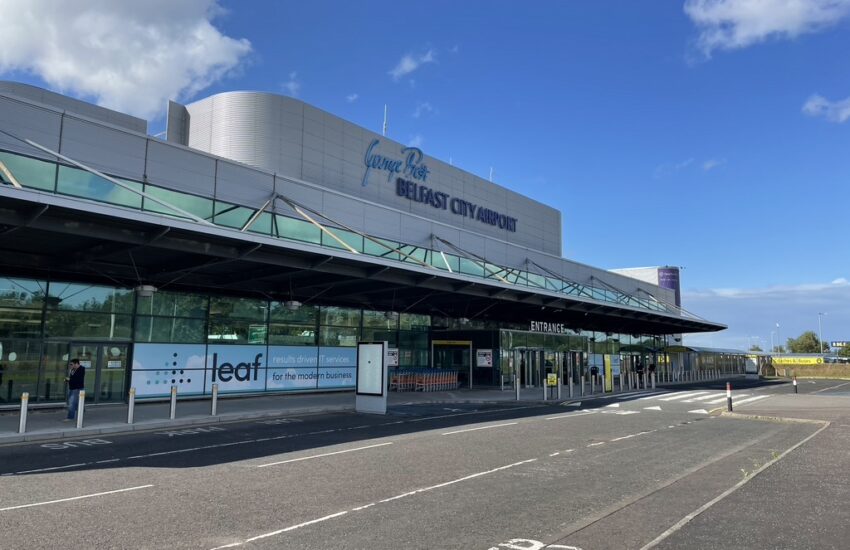 Co-owner Nic and I flew our TB20 from Gloucester to Belfast City Airport for a daytrip, visiting the city, docklands and Titanic Exhibition.

Daytrips to France are again possible at present despite COVID travel restrictions, but we preferred options for a buddy flight within the UK. We had enjoyed our day to Enniskillen and I proposed Belfast. I hadn’t visited for some 30 years and wondered how life had changed, plus I was quite interested in the Titanic exhibition. Nic was less enthused by the exhibition but agreed on the destination and we set about planning.

There are three airports in the area:

I was keen to try out George Best Belfast City (EGAC), right next to the docklands and exhibition. Nic enquired about landing/handling fees and it was quite a shock – certainly the most we’ve ever paid. After some discussion and considering the time saved commuting to/from Aldergrove, we agreed to split the fee and make the most of the day.

Flight time would be 90 minutes each way, VFR outbound and IFR return.

A flight plan isn’t legally required since we are not crossing an international FIR boundary although a good idea for the over water legs. A GAR form also shouldn’t be legally necessary because both Gloucester and Belfast City are police designated airports. However the handlers recommended that we provide a GAR form to avoid being “met” by the police, which I imagine would be inconvenient for all parties. Rather than send our personal details in the clear through the handling agent, we both submitted GAR forms via the free UK Government portal – SkyDemon didn’t offer that option because it (rightly) thought that one wasn’t normally required. Nic filed a VFR flight plan via SkyDemon for his outbound leg while I used Autorouter to file IFR for the return. This also avoided the need to book in or out with ATC at either end.

The weather forecast was generally good, with some stronger winds especially on arrival, mostly sunshine and no NOTAMs of concern.

It always takes a little longer to get ready than you might imagine. I arrived nice and early at Gloucester at 8:20, so had the aircraft out of the hangar and pre-flighted when Nic joined me. We started up around 9, refuelled to full, donned lifejackets and were ready for start at 9:20, taking off around 9:30 as planned.

The VFR flight was smooth and comfortable. Nic selected FL100 for safety, providing maximum glide range but remaining below Class A airspace at FL105. We received a traffic service first from Shawbury LARS, then RAF Valley (on Anglesey) and saw a couple of fighter jets in the distance. Elsewhere, the Red Arrows were on frequency, flying between displays.

Then a Freecall to Ronaldsway on the Isle of Man, who provided a traffic service. Although VFR, when we entered Class E, we were given a Radar Control Service which slightly surprised me. The controller must have assumed that we were IFR based on our altitude. Ronaldsway also co-ordinated our entry into controlled airspace with Scottish, assigning a squawk code and handing us over.

Nic first asked for a descent with some 50 miles to go, learning from our previous trip to Enniskillen where we left it a little too late. Aldergrove warned that descending too quickly and too low would put us out of their radio coverage, but clearing us initially down to 5,000 feet. We routed via the RINGA waypoint at the south entrance of Strangford Lough, where I’d been on holiday the previous year. We got great views of the loch and Newtownards off on our right.

Switching to Belfast Approach, we were further cleared to descend. We heard a Ryanair some distance away being vectored for the ILS, and could tell that the controller was assessing whether to fit us in before or after. Our groundspeed would have been around 150 knots at this point, so we were cleared inbound towards the Stormont Building. This will be familiar to many in the UK from nightly news reports, but I hadn’t a clue where it was, so we asked for clarification. It doesn’t appear as a declared VFR reporting point in the AIP or on SkyDemon. It’s the bright white building ahead of you. There were a couple of white skyscrapers ahead, but on the right a large heritage building stood out on the hillside that looked familiar.

Nic positioned us for what seemed to me like a fairly tight left base join given the long runway and that we needed to exit at the far end. But you can see below that there is space for the runway to be extended considerably beyond its current 1800 metres or to add a full length taxiway.

It was very gusty from short final to touchdown. Strong winds themselves aren’t necessarily difficult during the landing phase, and can help a lot to reduce groundspeed and landing distance required. On the other hand, wide variations in wind strength and direction are quite tricky and demand careful attention. Nic’s experience from landing lighter aircraft showed through and it was a remarkably soft touchdown. A short taxi to the GA apron found a marshaller ready and waiting in front of a Cirrus SR-20. We were whisked off by minivan to the main terminal and led through the security doors landside to the taxi rank. A few minutes later we were in the Cathedral district ready to explore.

The city centre appeared to be busy and thriving like any other major town in the UK. Some shops were closed down and for rent while others were thriving. We lunched in one of many restaurants offering a high standard of food and service.

We walked up through the city to the University district and Botanical Gardens which were modern, clean and well kept. The museum there was free, but had a queue due to limited capacity for social distancing.

I returned to the docklands area for my visit to the Titanic Museum (pre-booked timed tickets are essential) while Nic continued to explore the city by foot.

The museum building itself is a stunning architectural statement that appears quite surreal at first. Inside you find many interactive displays, a chairlift-style ride through the dockyard, 3D visualisations, presentations and films. A remote submersible video eerily “flies” over and around the ship on the Atlantic seabed. It was worth spending 90 minutes on it. Outside, you can see the area where the ship was constructed and plenty to walk around. The dockland area has had similar development of modern high rise buildings as London or Liverpool, but the pace slowed after the financial crash of 2008. We drove by the tallest building in Northern Ireland – Dubai doesn’t have anything to worry about.

Departure involved being escorted through the passenger security area although we didn’t have to queue. Pockets, belts and phones all through the X-Ray machine alongside everyone else. Then out to the apron to a waiting minivan and back to the handling office.

I had delayed the return flight plan by 20 minutes from 1700 to 1720 – very easy using Autorouter’s Telegram messaging feature – and we pretty much matched that timeslot taking somewhere around 20 minutes from arrival to engine start but could have done it quicker.

My IFR clearance was ready for me when I called for start. After power checks completed at A2, just opposite the GA apron, I was instructed to make a full length backtrack and line-up. I can’t ever recall being asked to do that – more commonly it’s “backtrack as required”. I taxied some 90% of the runway and turned around at the PAPIs. The controller said I had to go by the book and make a further 180 backtrack and line up at the end.

After take-off, you can see why a full length backtrack is advisable – there are fewer options in case of engine failure, so an early abort on or above the runway would be better, plus it reduces noise for those below.

Our clearance was after noise abatement, turn left on-track PEPOD 3,000 feet. This meant a climb straight ahead on runway track to 1,500 feet then turn left, giving us great views of the docklands and city then the Lough. Aldergrove Approach took over and cleared us up to FL90 on current heading, subsequently handing us over to Scottish who cleared us up to FL100. Ronaldsway covered us as we flew over the southern tip of the Isle of Man, mostly covered in a cloud that stretched only to the coast. Once again, Scottish Control guided us towards the mainland, changing us back to headings and occasionally asking for five degrees right or left. We were being given the shortest route while remaining inside controlled airspace, and turned the corner direct to Gloucester as soon as possible – we couldn’t have asked for a more direct routing while remaining within airways.

Scottish advised that their service would terminate and to contact London Information who had our details. They checked that we were cleared to exit controlled airspace in the descent, but in fact I remained at FL100 outside controlled airspace until about 50 miles to go. With no clouds in the sky, I had cancelled IFR to give me more flexibility on my descent profile ensuring we had a fairly smooth and constant rate throughout. I made more use of the Garmin GTN build in fuel planning screens, which calculate when you need to descend and how much fuel will remain after landing. The estimate was remarkably accurate.

Gloucester had one other VFR inbound at a similar time, but sequenced us ahead for a straightforward right base join and easy landing.