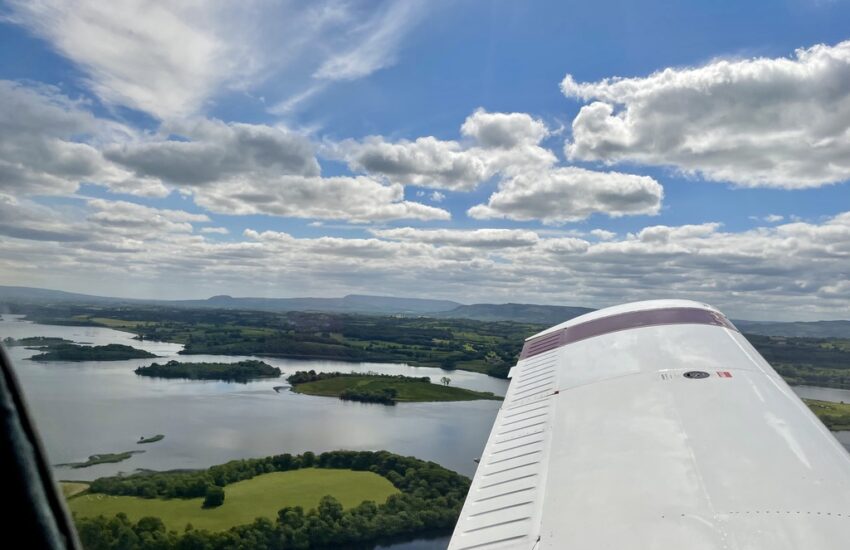 A day trip to Northern Ireland in the TB20 from Gloucester. Our second new group shareholder had missed out on flying the aircraft during lockdown and after completing his differences training was keen to see what it could do. Nic already had extensive experience of flying around Europe but mostly VFR in smaller/lighter aircraft. So we agreed on a day trip together and after some discussion selected Enniskillen, a VFR only airport in the south western corner of Northern Ireland. I would fly out on airways and he would fly back VFR, expecting about two hours flight time each way.

PPR involved a simple telephone call. Paperwork involved submitting a flight plan and GAR form each way. It does seem strange to still be required to send your personal details to the police 12 hours in advance of travelling within the same country. This is required by the 1976 Anti-Terrorism Act passed during the Troubles, now almost 50 years ago, and not affected by any BREXIT changes. The weather looked pretty bad to the south and west of Gloucester, with the edge of it just covering the airfield throughout much of the day. The ATIS reported few clouds at 1800 feet in light showers and rain.

We tanked up to full before departure which gave us the range to get there and back without refuelling, only getting slightly wet in the process.

Learning from my previous northbound IFR departure, I ensured my flight plan routed via STAFA.

This was fairly straightforward routing up towards Liverpool then remaining just south of the Isle of Man and Belfast then a short stretch over Irish territory, but remaining within the UK Flight Information Region (FIR) and talking with Scottish flight controllers.

My diligence may have been rewarded with a pleasant surprise at Gloucester when we were given our IFR departure clearance. “Cleared to join controlled airspace” isn’t a phrase I’ve heard on the ground there for quite some time, but we got this ontrack STAFA at FL100. As we climbed above the cloud layer, we switched to Scottish Control at FL50 and were given a completely different squawk code. That happened last time and I am not quite sure why.

It took until around FL80 before we fully emerged from the cloud and found ourselves sandwiched between two layers, with a gap large enough there was little chance of re-entering it. As we progressed, the upper layer receded leaving glorious blue sunshine and the layer below became broken giving glimpses of countryside below.

This first controller was quite busy – I believe the sectors being controlled have expanded as air traffic has reduced – so we needed to keep a close ear out for any further instructions. As we approached STAFA, I was given a shortcut direct to WAL (overhead the Wirral). The subsequent sector was a little quieter, and again on approaching the Isle of Man at KELLY we got a “Direct” to our destination. These both kept us within controlled airspace and the Scottish FIR until close to our destination.

The slightly unusual section followed where we left controlled airspace south of Belfast. The controller alerted us that we might lose two way communications, and if so then we were approved to switch to Enniskillen Radio. We stayed with him as long as possible in order to benefit from knowledge of other traffic, but there was none, and we switched with about 25 miles to go. At that point, we were flying outside controlled airspace directly above Ireland which still seems quite bizarre.

Enniskillen Radio was expecting us and quickly gave us the airfield information – runway 32, left hand, QNH unchanged from our descent. There was one helicopter in the circuit which landed before we arrived. Being an Air/Ground Radio service, they can’t instruct you where or how to fly and I thought it reasonable to position for a straight in approach from a wide right base.

We could see the watery expanse of Lough Erne to the north of the town, which helped identify the airport close to the eastern shore. The town itself is on the southern end and actually an island where the river splits and flows around it. The rolling hills with lush green fields are very scenic in what is a fairly remote part of the country.

Despite starting our descent some 40 miles out, I was still a little high as we turned onto a long final but recovered that in good time. The short final is quite scenic and dramatic, with housing close by and a telegraph wire strung out before the displaced threshold. With little wind and no other traffic, it was an easy touchdown. Taxiways are both closed, so it was a short backtrack to the large GA parking apron where the airfield manager came out to welcome us. He advised that our flight plan had been closed. What a friendly and easy place to visit.

As part of the excellent and friendly service, a taxi had been called while we were on approach and pulled up as we got out of the aircraft. The terminal building has an office for payments, and a cafe (which was closed) on the other side. The main car park area outside the airport had been converted into a COVID testing station which looked to be very quiet. A short taxi ride into town and we were walking through a busy high street choosing from a wide range of possible lunch venues. We settled on Bees Knees and enjoyed a relaxing meal.

Many people might first associate Enniskillen with a bombing in 1987, and our taxi driver did point out where that had happened. That’s now over 30 years ago and we didn’t witness any hostility or feel threatened during our visit – quite the opposite given the friendly and welcoming nature of the Irish culture. We sauntered down to the main Castle by the river front, but didn’t have time to visit inside (there are other National Trust properties a few miles away) or take a boat tour on the Lough. Having sampled the flavour of the place, it was not long before we headed back to the airport for our return journey.

Nic flew this leg back VFR, climbing up to FL70 (not FL75 due to airspace above) for much of the route, which was slightly more direct and fairly uneventful. It seemed more of a struggle to gain two-way communication with Scottish Information as we climbed eastwards taking us until almost south of Belfast at FL70. We did speak with Ronaldsway on the Isle of Man this time ensuring we had radar coverage while over the sea. Coasting in over Anglesey, London Information relayed the latest Gloucester weather of few clouds at 700 feet, broken at 1500, so we flew the RNP approach into runway 09. Despite it being a Friday afternoon, there was little other traffic around due to the poorer weather. As I did on my leg, we were perhaps a little high before reaching the initial approach fix, but that was recovered in good time for an excellent landing.

A very enjoyable day out visiting another new and interesting airfield, well away from the bad weather at home. It’s a shame we couldn’t have popped across the border to Sligo or Knock but that will have to wait until COVID travel restrictions are relaxed.