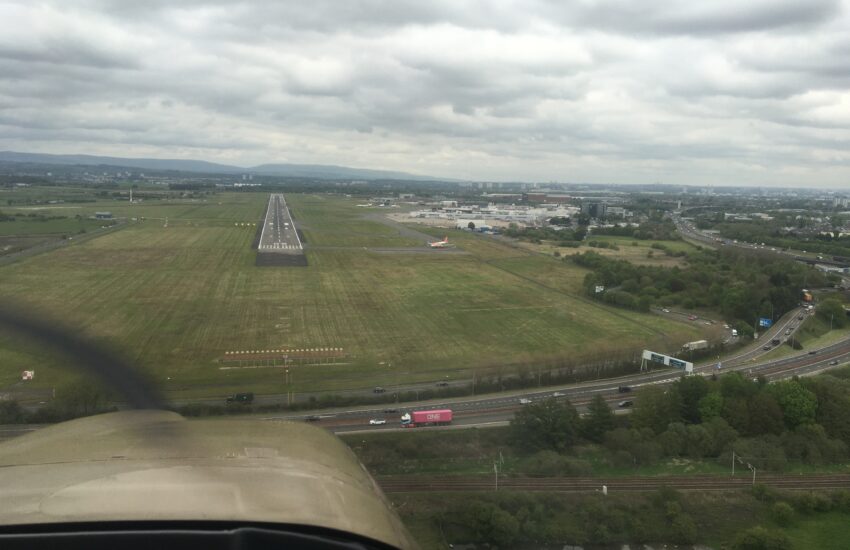 With lockdown restrictions easing and hotels reopening, I was keen to plan a longer trip. Foreign travel bans remain for nearby countries but within the UK, Scotland beckoned. My wife and I agreed in March to take a week’s holiday mid May by which time restaurants and hotels should have reopened. Our itinerary was a few nights in Stornoway in the Outer Hebrides followed by a few nights in Mull, visiting Plockton for lunch en-route between the two. I booked a self-catering cottage in Stornoway followed by a few days in a hotel on Mull. Both offered a late cancellation policy in case of a change in restrictions, weather or other unforeseen circumstances.

Although Gloucester to Stornoway direct is quite feasible in the TB20 in around 3 hours, I intended to make a fuel/rest stop to break the journey. Glasgow airport recently became accessible for visiting GA pilots with the flying club now able to provide handling for aircraft less than 2 tonnes. Fuel price is comparatively low (even a few pence cheaper than our home base at Gloucester) and much lower than Stornoway. Alternatives would have been Kirkbride just south of the border, or Cumbernauld (a few miles west of Glasgow), Perth or even Dundee (but each diverting further off course). Oban still doesn’t offer fuel although it should become available soon. Carlisle is NOTAMd closed until end of June. The big advantage of Glasgow is a full IFR approach service with radar and long/wide runway suitable for a wide range of weather conditions.

I requested PPR via their new website but ended up simply phoning the club directly. Pilots also need to phone Glasgow ATC for PPR separately, in addition to (optionally) filing a flight plan.

Car hire from Stornoway airport was very straightforward but Mull required some chasing up because the provider had been on furlough until recently. In the end, both worked out well.

PPR from Stornoway required completion of a form from ATC aimed more at charter operations. I had to lookup what a UK NASP CP is to determine if I was arriving from one (it’s to do with security screening). Glenforsa airfield (run by the hotel owners) was as accommodating as usual and it’s good to see the hotel open again for the season.

My IFR flight plan was generated using Autorouter which offered a “Eurocontrol suggested” route of:

The GRAMET pictorial forecast was very helpful, indicating that we’d be well above cloud for 90% of the flight and above freezing temperatures when in the soup (so no icing to worry about).

I’d overlooked the lesson learnt the previous year when heading north from Gloucester. Their airport AIP entry clearly states that all IFR departures must route via STAFA, and if you don’t file that route then you can expect for it to be “corrected” for you.

I first heard about the Joint Warrior major NATO military exercises planned to overlap our trip from the Flyer Forum, and subsequently the stream of NOTAMs that followed. These specified the times of day when “high energy manoeuvres” would be in progress. While I wouldn’t be flying within any Danger Area (the ones where they actively shoot down towed dummy aircraft), and so legally not banned it did seem a good idea to be on the ground during those times. The schedule wasn’t published by NOTAM until a couple of days beforehand but in practice it was quite easy to adjust our planned times slightly to fit in.

With COVID in mind, we both took lateral flow tests three days ahead and on the days of our flights to avoid importing the disease to the islands.

The weather as we departed looked worse than it was. Few clouds at 600 feet, broken at 900 and overcast at 1400 with wind of only five knots. There was quite a bit of IFR training activity and this meant we were held on the ground for a few minutes prior to take-off.

Our departure clearance (fly on track 045 at 3,000 feet) was intended to keep us away from other IFR aircraft in the hold or approaching and was exactly the same as for the other aircraft behind us. Fortunately that was a slower type so wouldn’t catch us up. I’ve been using the “CRAFT “acronym to note down IFR clearances lately:

I’ve occasionally found students asking if the track means intercept and fly the radial from Gloucester (using the ADF or GPS) but it definitely doesn’t. While initially estimating a drift corrected heading and setting with the heading bug is a good idea, I find using the GPS (either the map or default navigation page) to display current track and then refine the heading works well. You can then use the autopilot to fly that heading and monitor whether it’s maintaining it or not.

We entered the cloud at about 1,500 feet after which Gloucester asked us for our track to STAFA (the usual waypoint to enter controlled airspace from Gloucester when heading north), which I said was not what I’d filed.

I was told that I had been re-routed, and subsequently instructed “on reaching FL50 proceed ontrack STAFA”. We popped out of the clouds shortly after into the sunshine just above 3,500 feet. It only took a few minutes to transition from underneath dull grey clouds on the ground to glorious open skies.

After reaching FL50, Gloucester Approach relayed my clearance to enter controlled airspace at STAFA at FL100 (which I was confident of reaching in time) and handed us over to Scottish. This first controller acted as a gatekeeper before entering the airways – previously a role undertaken by a sector called Western Radar – and initially seemed fairly quiet.

There’s a little bit of Class D airspace to the west of Birmingham above 6,000 feet through which you climb and I was confirmed entering controlled airspace as I climbed through FL75.

I could hear the controller talking to a variety of other aircraft but saw nothing. It appears that with low levels of traffic, the sectors allocated to each controller are very much larger than normal – meaning they can often be just as busy as usual.

Routing was STAFA then POL (Pole Hill, also a VOR) then ASLIB (as filed) then LANAK (a shortcut). The carpet of cotton wool below us visibly became broken cloud almost exactly as we crossed the Scottish border. Descents were actively issued in good time, leading to a nice gentle descent profile and Glasgow Radar vectoring me onto the ILS behind a Loganair scheduled flight.

Cloud tops were 4,500 feet with bases just below 3,000 so it was only about three minutes for the gentle descent through the layer. We popped out just as I intercepted the ILS to see the city about eight miles ahead. No need to report localiser established – radar saw that and told me to contact tower. A runway inspection was completed during our approach and a landing clearance given in good time.

An Easyjet was approaching the hold when I was on short final. Another small aircraft behind me was told to expect a stop and go prior to circuits, ensuring that wake turbulence as the airliner departed would dissipate – all the safe, well controlled procedures you’d expect from a larger airport.

The taxiway into the flying club parking area is pretty narrow – there’s nowhere to pass so do look ahead – and there are marker posts on both edges. The main fuel bowser is a fixed installation at the far end – stop just before the white hold markings in front. It’s not self-service and requires a trained person to operate it, typically club personnel although based aircraft and visitors may be able to use it after completing training.

I’d explained in advance that I didn’t have long on the ground due to military activity starting in the afternoon on my next leg, so was pleased to see a marshaller waving at me on arrival. It was Allen, the club owner who explained how he had paid for installation of the new bowser and his ambition for the club. There seemed to be plenty of activity and aircraft around, with about ten parking spots marked out.

The club hut is a large portacabin with toilet, offices and a coin operated coffee machine that seems to beep a lot. Reception staff took my payment and promised an emailed receipt. Seating provides a bit of character, being recycled from an old passenger aircraft. Next door there are two flight simulators – one setup for a 747 and another for more traditional single engine training. I’m told there is a good café within reasonable walking distance but since the club is on the other side of the airport from the commercial activities, a taxi would be needed to access those. It’s only three miles into Glasgow city centre making it very accessible. The landing fee includes up to two hours free parking, thereafter there’s a daily rate. My instrument approach was included in the landing fee making the price similar to my home base at Gloucester.

I liked the full radar ATC service provided which ensures access in most weather conditions. Costwise, there is a tradeoff between the fuel price and landing fee between nearby airfields, but it’s quite competitive here and certainly a bargain compared with further north (Inverness, Wick, Lerwick) or west (Oban, Stornoway).

Speeded up arrival, parking and departure from Glasgow Airport – IFR with ILS