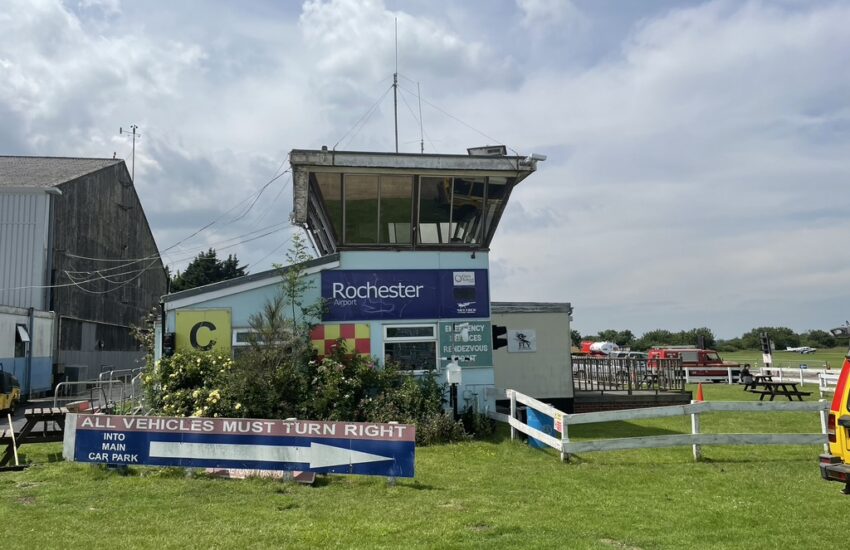 I had a spare day of not instructing and the TB20 at Gloucester was available. Given only short notice and with fairly poor weather visibility, my co-owners were unavailable or preferred to not join me, so I flew a solo landaway. Although it’s much more sociable to fly with others, it can be quite refreshing to have some solo time as a change from the busy dual instruction of recent months. With clearer weather to the east, I had thought about visiting one or two new airports in the south east but in the end decided upon Rochester as the target for the day, flying north around London and returning south along the coast.

Rochester is a grass airfield to the south east of London, one of the few larger ones in this part of the country. It’s gone through a period of fairly tortuous development planning in recent years. A popular element of this included the intention to upgrade to a hard runway but instead planning permission for only a range of hangars and other buildings has been approved.

The call for PPR was very welcoming but noted that the cafe was open only between 9am and 1pm.

The TB20 with two thirds tanks (about 200 litres) and one onboard has a noticeably higher performance, faster ground acceleration resulting in a shorter take-off distance of less than 300 metres. The runway lighting was on due to the poorer visibility. I departed and climbed through a thin cloud layer to become VFR-on-top. Gloucester co-ordinated an inbound Seneca that was somewhere below me in the clouds. It was nice to hear the pilot state “I have him on ADS-B”, which meant he was picking up our ADSB-out transponder position reports. Subsequently, passing overhead Brize between 4,000 and 4,500 feet with a traffic service from them. I had to pick my descent point carefully, preferring to retain a traffic service during the descent but when outside their area I discerned that Farnborough LARS (Lower Airspace Radar Service) controllers were overloaded and unlikely to be able to provide a useful service. I timed it to remain just above Benson’s MATZ, becoming VFR again below about 2,800 and descending through a very thin layer to around 2,000 feet to remain below the London TMA.

I spotted quite a few other aircraft in this tightly constrained airspace around London. You do need to spend more time looking out than when higher up in airways within controlled airspace, and there was a variety of aircraft types seen from paramotors to twin engined. I did make use of listening squawks when closer to controlled airspace but did not request any service from what were clearly busy LARS controllers. I feel that the service available wouldn’t be terribly useful. Controllers seem to spend a lot time warning pilots that their services were limited by workload or equipment, meaning that you may or may not be advised of traffic that may or may not affect you.

I did consider how best to transit the constrained area between Stansted and London City, flying north of North Weald well below but only slightly south of Stansted’s airspace. There is a choice of listening out on North Weald’s air/ground frequency (which I did, although I didn’t talk to them) or Stansted’s in case of infringement. This alerted me to another aircraft joining their circuit which I saw visually and kept well clear. I’d forgotten how little room there is between their circuit and controlled airspace, so next time I would more likely fly overhead Stapleford while talking to them.

When calling up Rochester, there was only one other aircraft on frequency. The unusual easterly wind meant runway 02 was in use and so it was straightforward to position for a wide left base join for 02 Left. The final approach crosses the motorway, sunk into quite a deep cutting, which possibly suprises newcomers like me because you only see it on very short final. The grass runway is more than long enough and reasonably flat, with a few more bumps after initial touchdown compared to tarmac. The FISO provided very clear progressive taxi instructions down the parallel taxiway into what has become a new layout for visitor parking.

The south side definitely looks like a building site, with construction workers laying down new tarmac, erecting steelwork and progressing. The shape of the new control tower could be made out alongside some pretty large new hangar space. It took me a little while to figure out where the cafe was – further south on the other side of the old hangars. Although it could do with a bit of refurbishment, the staff were welcoming and provided the usual airfield cooked choices alongside hot/cold drinks and snacks.

I happened to meet up with a PPL/IR member who is based there and we had a very useful chat about common themes, such as the requirement for N-Reg aircraft owners to hold a UK licence when flying within the UK after 22 December 2021. It’s hard to say how many pilots this will affect. No doubt some will spend the time and money to take the test (most likely with some specialist training beforehand) but we could see that many might find their UK IRR sufficient, retaining a FAA PPL/IR for use after crossing the border. I suspect quite a few N-reg owners have aircraft not fitted with ADF, a technology rarely used in Europe outside the UK, but it remains awkward to take the UK IR skill test without one.

My flight back took me a little longer than I had anticipated, mainly because I chose the scenic route along the coast all the way to Bournemouth. Departure with a left 180 degree turn kept me well clear of Southend’s airspace which now encroaches to the ATZ to the east above 2,500 feet.

I never get tired of flying low level (say 1500 feet) along the Solent, where I have previously spent many happy weekends pottering about on yachts, although visibility wasn’t that great. The transit through Bournemouth was easily obtained – there is currently so little commercial traffic in most Class D airspace that these have not been a problem. I was advised to route around Compton Abbas which had a fly-in event that had attracted many visitors.

Returning back to Gloucester was perhaps the hardest part of the flight, with the circuit busy and other arriving traffic. 4pm does seem to be a popular time and perhaps I should have delayed my return further. Positioning behind other circuit traffic can be difficult single pilot if you lose sight of the other aircraft and I was still a little high and fast on short final. I negotiated a dead-side crosswind join from the south which avoided the full overhead join and was asked to orbit twice downwind for spacing, then followed another aircraft on base which I briefly lost sight of and caused me to remain higher than normal. The “Land After” clearance should have allowed me to land with sufficient distance from the previous aircraft shortly vacating at the far end, but I wasn’t comfortable so went around. The old mantra applies: “if there is doubt, there is no doubt”.

After landing, I refuelled to full tanks, ready for our weekend adventure the next day.