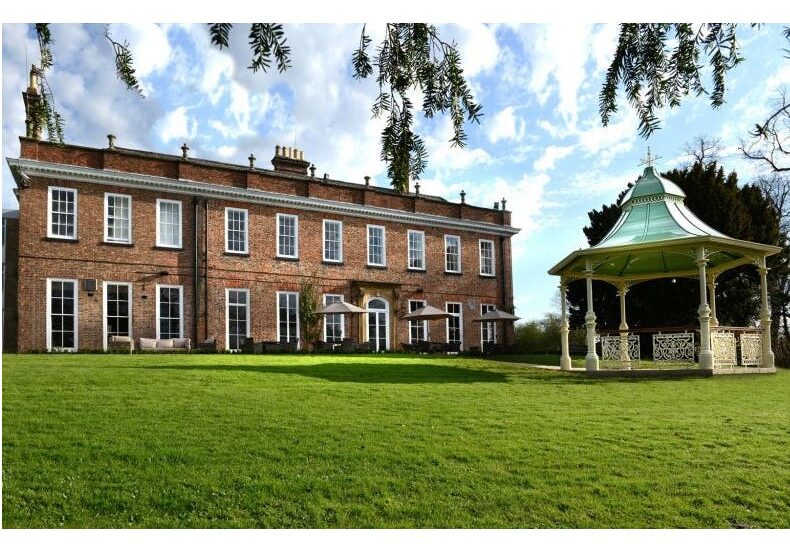 My niece got married last year but we couldn’t attend due to COVID restrictions. So instead we planned to fly up for the weekend, stay in the same hotel where they held the wedding, spend the day and have dinner there with them and close family. The Blackwell Grange hotel in Darlington is only ten minutes taxi ride away from the airport. A little more than one hour flight time from Gloucester was far more attractive than spending six or more hours on the road.

My main concern for the weekend was the weather, which was at best unsettled and did include forecasts of some intense thunderstorms with flash flooding. I preferred to fly airways which is more direct and simplifies the need to request controlled airspace transits (although to be fair, these have been quickly and easily granted lately without significant routing restrictions).

Since my last visit in 2017, the airport has been rebranded as Teeside International and enjoys strong support from local politicians. Tees Valley mayor Ben Houchen brought the airport back under public ownership from Peel Holdings in a £35 million deal in 2019, also blocking a proposed housing development next the terminal. A regular daily service to Heathrow was reestablished in 2020. From a visiting GA pilot’s perspective, the only significant change is that the approach and tower frequencies have been renamed to Teeside Radar and Teeside Tower respectively.

PPR is mandatory with the handling agent listed as Jet Centre, now directly owned by the airport and has been since my previous visit when it was called Consort Aviation. They had used the Stobart branding for a time (with their agreement) although were never actually owned or operated by that group, and have recently reverted back to just the JetCentre. Their response to an email was prompt with clear pricing and confirmation. With less traffic at weekends, they aren’t onsite all day but will come in to attend to any visitors. They are by no means restricted to private jet traffic and we found them responsive, helpful and courteous throughout.

I filed an IFR flight plan the day before using Autorouter, keeping a close eye on the weather forecast.

The routing was north to STAFA with a cruise speed of 145 knots at Flight Level 100, then along airway P18 to POL (Pole Hill VOR), GASKO (another GPS waypoint) then direct to Teeside.

On the day it looked good and we decided to head off after lunch at 1300. Having flown the previous day and topped up with fuel, it took very little time to prepare and get the TB20 ready. The only question was what surprises the airways flight might hold – there is always something unusual and/or unexpected about the routing or handling. Having learnt from previous mistakes, my airways routing did ensure STAFA was the first waypoint north of Gloucester. My clearance on the ground, relayed by Gloucester, included entry into controlled airspace at STAFA at FL100 – in the past I have usually been told to remain outside until cleared in by Western Radar or Scottish Control. This meant I could continuously climb without fear of infringing the stub to the west of Birmingham that starts at FL75 (and FL65 if only slightly offtrack to the east).

Compared with a directly routed VFR flight, it is much easier once you are “in the IFR system”. You do have to attentively listen out for instructions and must comply, but most of the time it’s fairly relaxed. VFR flights involve constant attention to what airspace or other dangers lie ahead, negotiating clearances with controllers that have no information about your flight and always looking out for other aircraft. When in uncontrolled airspace, you do have the flexbility to change course or altitude whereas in the airways you must first ask permission to deviate around any dark clouds or bad weather.

The airways sectors generally seem to remain fairly busy even in these quiet times. There were relatively few airliners coming and going from regional airports, but equally fewer controllers assigned to handle them. I was passed across between two sectors of Scottish control and plodded north at around 150 knots at FL100, and today’s “surprise” was being given a shortcut routing from STAFA directly to GASKO even before entering controlled airspace. This made the routing into almost a direct line. There were a couple of minor heading changes, and I was instructed to “fly current heading” at one point. This shouldn’t affect the ground track you fly, but I switched the autopilot from navigation mode to heading mode to comply. I believe this is done to allow controllers to reduce the spacing between aircraft, which is less when under specific headings than routing themselves to the next waypoint.

The only dramatic part of the journey was the approach into Teeside, during which we had to pass through some darker clouds and turbulence. We had a few minutes of a roller coaster ride with the aircraft descent rate varying and wings rolling. The best thing to do in these situations is to slow down (to turbulence penetration airspeed) and not make any major control inputs. For light aircraft, this is slower than the manoeuvring airspeed and depends on how heavily loaded the plane is, as explained here. It was by no means severe and all over in two or three minutes but you never quite know how long it might take.

Teeside Radar vectored us onto the ILS from quite a long way out. So far ahead that I hadn’t actually dialled in the ILS frequency or idented it at that point. It also made me consider whether to do the pre-approach checks from 25 miles out, but I decided to defer those until about 10 miles to go. No point in having the fuel pump and landing lights on for the extra time – as long as you remember to do the checks later. Runway 05 was in use which was ideal for a straight in approach, and with only one other training aircraft in the circuit there was little to affect our direct arrival.

After exiting half way down the runway, parking was on the Western Apron. After we had packed up and put the cover on, a handler drove us in a minivan the short distance to their FBO and called a taxi. A short ten minute drive and we were at the hotel.

Darlington is perhaps not the most attractive town but does have its highlights. One of the world’s first public steam railways opened here in 1825 transporting passengers and coal from the mines to Stockton on the river Tees, and it celebrates that with the Head of Steam railway museum. We didn’t make it there but it will be of great interest to some.

There aren’t really any National Trust properties close to Darlington, so instead we visited Raby Castle which was bought by the Vane family in 1626 and their descendants still live there. We spent much of the day at the Castle and I thought the entrance fee was well worthwhile to see inside.

The menu for dinner was extensive and included a local speciality called Chicken Parmo, a Teeside dish mostly involving deep fried breaded chicken and cheese with very high calorific value. I opted for one of the many alternatives and one of a wide range of deserts. Clearly a good wedding venue. A flight crew from the airport was overnighting there, usually a good sign. An imposing building which offers very good value for money at the moment, although not quite yet fully refurbished throughout.

Sometimes on these trips, there can be a slightly unsettling anxiety about what the weather might bring for the planned return trip. Ultimately you can always delay your return – it might incur costs, cause offence or worst case perhaps loss of employment, but these are always better choices than a serious accident. If you had a technical problem that grounded the aircraft, the choice would be made for you. So I monitored the forecasts including the GRAMET representation, based on the same GFS models shared by many other weather reports. It surprised me just how much it changed overnight for the same period the next day.

With unsettled heavy weather forecast for Sunday, especially in the afternoon, I considered flying back VFR so I would have more flexibility about routing around bad weather. In the end, I brought forward our return journey to Sunday morning and flew back IFR. That proved to be the right choice because the forecast worsened overnight.

We took off at 1100 local and were back at Gloucester by 1230. The runway direction had been reversed so it was straight out from 23. The IFR airways routing was almost the reverse of our northbound trip, with the benefit of being held in controlled airspace a little longer under the supervision of Birmingham Radar. I requested one weather diversion when just north west of Leeds to avoid a nasty looking cloud developing ahead but we did go through some light turbulence briefly overhead Manchester. We don’t have onboard satellite weather display (such as a Golze) which can be a huge bonus in these situations by providing almost up-to-date information.

As we descended towards Gloucester, the ATIS suggested I’d have to make an instrument approach, but a pathway opened up in the broken clouds that allowed us to descend easily below. We could see the cloudbase to the east was around 2,500 – just exactly the location and altitude of the published approach – so opted instead to dodge around the clouds and land VFR. We positioned for a wider than normal right base join for runway 27, giving us a different perspective of GCHQ – normally we turn to the west of it.

A quick refill at the pumps, put the aircraft to bed and we were free to explore Gloucester for the afternoon.

Looking at the rain radar after we had landed, I think the decision to return early was a good one – the build ups increased throughout the day and we encountered quite an intense downpour later on our drive home.