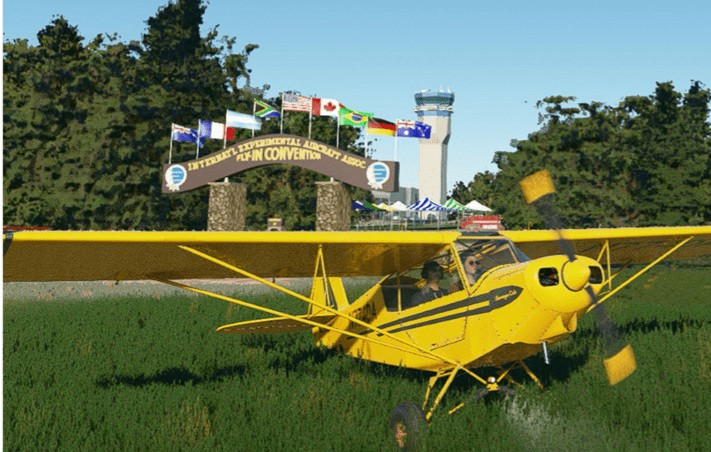 Around 10,000 aircraft fly into the AirVenture, the world’s largest annual GA event, held at Oshkosh in Wisconsin USA and attended by 600,000 people in 2018. Special procedures apply to achieve such a high volume of continuous arrivals and departures, with dedicated controllers, a 50 page NOTAM and dispensation from specific FAA regulations.

Even if I had wanted to attend, COVID restrictions would prevent that this year, and the challenge of flying in to it seems hard especially to a foreigner. But what if I could do that “virtually” on my desktop simulator? PilotEdge ran a four day event called SimVenture 2021, during which they provided scenery models, NOTAMs, video briefings and live online real-world OshKosh controllers that provide a remarkably vivid emulation of what it might be like.

I downloaded the 8 Gbytes of scenery, updated my navigation database, read the NOTAM, practiced offline, tested my radio/headset, filed my PilotEdge VFR flightplan and logged on.

Traffic arrives in a constant stream flying north east from Ripon directly over the railway tracks at 90 knots, 1800 feet QNH (so 1000 feet above ground), with no less than 1/2 mile spacing. Retractable gear aircraft would have their gear down by that point.

Faster aircraft arrive at 2,300 feet, 135 knots. At Fisk, the “approach controller” calls out each aircraft by type and colour, asking them to rock their wings to acknowledge – e.g. red and white Cessna, rock your wings. Once identified, they are assigned the north or south arrival to 09/27 or 18/36 and switch to the appropriate tower frequency. These are named the Railroad Track Transition and Fisk Avenue Transition respectively.

The railroad track transition is really very obvious but the right turn onto Fisk Avenue is not so visible and pilots are warned not to mistake highway 44 for it (shown in red above). A heading of 090 is a good clue that you are going the right way.

Pilots don’t normally need to say anything or verbally acknowledge any clearance or instructions. You just do what you’re told. Controllers deliver an almost continuous stream of monologue which sounds like a cattle market auctioneer at times. When downwind or on base, you’ll be cleared to land, typically on a coloured dot – e.g. aim for the green dot, land on the orange dot. They sound extremely positive and welcoming, praising and reassuring pilots who they recognise many might be finding this quite stressful – “great wing rock, looking good” etc.

Once down, you must immediately turn off onto the grass to clear the runway for the next one behind you. A large number of “flagmen” provide clear direction to the parking area. I landed on the main 27 runway which required a long taxi around the far end of the runway and back before exiting between one of the long rows of parked aircraft.

As inbound traffic levels increase, then the arrival transition point is moved further away. The ATIS and the approach controller frequently announce the current transition point, and these are also available as GPS waypoints for use on your Garmin 430 etc.

This virtual event was held a week before the real one, and although there were many disclaimers explaining how this was for entertainment only, I can’t help think that this would be of enormous value to anyone planning to fly in the following weekend. Even for those who’ve been there before, it must be a good refresher.

I flew from an unmanned airfield to the west, Reedsburg (C35), so had plenty of time to setup for the furthest arrival point at Endeavor, past the various lakes which can be used as holding points, then Ripon and Fisk. I visually saw other aircraft at Ripon and flew behind one – there were two or three further ahead which only came into view when I joined the pattern.

The terrain is pretty flat around here so flying at 1,000 feet AGL wasn’t too much of a problem. I had SkyDemon running alongside and that prompted quite a few alerts of nearby masts/antennae.

My one mistake was flying too far north over the gravel pit when positioning downwind for 27. You should remain south of it. The controller spotted that quickly and told me to fly heading of110, turn base over the FBO and cleared me to land. I did not have to transmit or acknowledge anything during the flight.

Although it’s not quite the real thing, I was very impressed at the attention to detail and the realism this involves. You can participate using any of the popular flight simulators (X-Plane, P3D, Microsoft). While you need certain basic skills to fly and navigate an aircraft, you only need a headset and a subscription to connect onto PilotEdge.

You can get a feel for what it’s like for real from the EAA AIrVenture website, which includes some real-world videos from pilots who have flown in, such as the one below:

Well done to those with the imagination and expertise for making this possible, even if just for a few days.

Perhaps one day I will make it there in the real world, and who knows whether we’ll be (virtually) flying in to the UK’s LAA rally next!