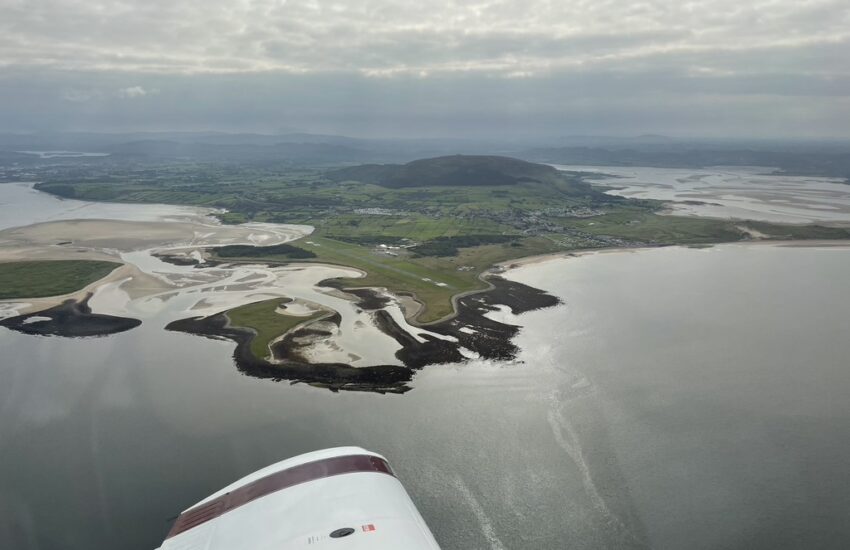 After a successful club weekend trip to Kerry, I quickly followed up with a week’s holiday in Ireland with my wife, first visiting Sligo in the Northwest, dropping in to the Aran Islands briefly before spending a few days exploring Kerry. This trip was in my shared TB20 based at Gloucester, with our first stop at Sligo just over two hours flying time.

See my previous post regarding the limited paperwork required. Sligo were prompt and helpful with my handling queries. I considered whether to file IFR airways or stick with VFR plan. I’ve found that ad-hoc admission into the UK Class A airways is almost impossible, whereas cancelling and routing outside remains an option. In retrospect, perhaps a “Z” flight plan (VFR then IFR) with a more direct route outside controlled airspace over Anglesey picking up an IFR clearance from Dublin would have worked better. My intention was to reduce the time spent outside glide range, so opted to file IFR using Autorouter with an airways routing of:

The weather was fairly benign with easterly winds. A carpet of cumulus cloud lay between about 1800 and 4000 feet, making it helpful to fly above it but would require an instrument approach on arrival.

Although we arrived in good time at Gloucestershire airport, I had to extract the aircraft from the hangar, refuel to full (we don’t leave it full in case the next pilot wants to fly with more passengers) and don lifejackets. So my 0900Z IFR offblocks time was missed, and I called for start at 0914z and was off-blocks at 0918z. I read a message later that my flight plan was suspended at 0927z because I wasn’t reported airborne, taking off at 0929z. There is 15 minute tolerance for EOBT (estimated off blocks time), so I should have sent a delay message which is actually very easy using the Telegram App through Autorouter. I think this is the first time I’ve missed an IFR EOBT time. If travelling through busy sectors, it can impact ATC utilisation. Worst case, your departure can be delayed until a new flight plan is submitted and accepted, but fortunately I suffered no delay.

Your flight plan was suspended at 2021-09-02 09:27Z. Please check the message and contact ATC if required. Depending on the cause, you may receive a de-suspension message later.

The details of the flight plan are as follows:

The following comments were given:
– NOT REPORTED AS AIRBORNE

At the hold, I was given my departure clearance. Sometimes, it feels like pulling the arm on a slot machine and wondering what’s going to come out. The Gloucester AIP clearly states that all IFR northerly departures (other than jets) must file STAFA as the first waypoint and that has caught me out in the past. Today’s initial clearance was for TELBA, FL100, Remaining outside controlled airspace and next frequency Western Radar – that sector has not been open during my recent IFR trips north, so perhaps a sign of increasing commercial activity. No designated squawk, so I used 2000 – the default for IFR outside controlled airspace.

Passing FL50, on handover to Western Radar I obtained a traffic service, was given a squawk then routed direct to MONTY and told to expect clearance into controlled airspace later. I was a little concerned about the stub of CTA north of Worcester/west of Birmingham that I would be climbing through above FL75. SkyDemon was prompting me that I was about to enter controlled airspace, so I checked with ATC who clarified that this is only active until 8am weekdays – something not easily discerned from my tablet or paper charts. Another quirk of UK airspace which I researched later. Subsequently I needed to use Jeppesen charts to identify it as Cotswold CTA 18 and the AIP (extract below) to uncover that it is active overnight weekdays and all day weekends including public holidays. So Thursdays are OK but Saturdays and Sundays not. Unfortunately the normally wonderful SkyDemon doesn’t reveal the airspace name or this complexity, further increasing the workload for the busy IFR single engine pilot. Kafkaesque? You really couldn’t make some of this stuff up.

With little or no activity to report, Western cleared me into controlled airspace and handed me over to Scottish Control. Perhaps this was a little early because I was still outside controlled airspace, so there then followed the little dance where you are asked to specify the service required, you request Traffic Service, and then both confirm the contract. About one minute later I was in controlled airspace. I would have been quite happy to have been informed that I would continue getting Traffic Service (or even for that to be implicit) and be done with it. Perhaps I should include a request for traffic service whenever handed over outside controlled airspace. We are trained to do this on first contact but I have assumed that the service provided is also passed across during handover.

Scottish issued me a different squawk and let me continue north as per my flight plan towards WAL (Wallasey, just south of Liverpool) with a brief 10 degree diversion for traffic separation, then just before reaching gave me a direct to BAGSO in the middle of the Irish Sea. This was a direct routing and arguably the most efficient so I accepted it despite it increasing the time spent out of glide range. It was clearly beneficial to ATC because I left controlled airspace fairly soon afterwards. I was informed when leaving controlled airspace and told I would be given a Traffic Service (much simpler than just before entering CAS). There was nothing flying anywhere near me.

My handover to Dublin wasn’t quite as seamless as expected. The controller didn’t seem to be expecting me, and after a couple of minutes asked me to advise my intentions, then offered me the choice of routing direct to Sligo or via BAGSO first, so I routed direct. About five minutes later, I was asked to change my squawk code 7627 to 7267. Perhaps this was co-incidence or perhaps it had been transposed during the handover, which may well have been done over the phone. I normally make a point of repeating back squawk code as a pair of two digit numbers – it usually helps to avoid error. I also see I wrote down both numbers on my notepad, and double checked those later with an audio recording made in flight.

Shannon took over once clear of Dublin airspace and seem to handle both commercial and private flights outside controlled airspace. It’s a pretty joined up system with the controller clearly able to see you on radar. No need to change squawk code again. I asked for latest weather at Sligo and for the RNP approach which was relayed through.

You recognise you are abroad when pilots greet the controller with “Top of the morning”!

Shannon held me longer than usual because of IFR departing traffic below me – they have radar which Sligo don’t.

The RNP approach is still fairly new to Sligo, published earlier this year, and the plates have some quirks not found elsewhere. There are two RNP plates for the 10 approach, both for Category A/B. One (Yankee) used for the LPV minima, the other (not lettered in the AIP, but marked Z in the Jeppesen format) for LNAV and LNAV/VNAV. Normally these are simply marked with different minima (minimum altitude before going visual) on the same plate. Sligo has a thumping great mountain just off to the south east, and the difference in minima is significant (height of 309 vs 809). The missed approach (go-around) point is also different, with differences also depending on aircraft climb rate.

In any case, I requested and was cleared specifically for the RNP Y 10 Approach.

This allowed a controlled descent through the cloud layer and we popped out on base leg giving us fantastic views of the bay and mountains on final approach. I confess the runway itself was quite hard to identify until a few miles away. An easy touchdown and parking with the marshaller. Very friendly airport staff. Taxi into Sligo itself where we picked up a hire car. Taxis have to drive out from town, it’s about 15-20 minutes drive each way, so worth either booking the taxi in advance or as soon as you land.

The airport used to have regular flights to/from Dublin, but ceased when the subsidy was withdrawn in 2011. The airport is extremely well equipped, has a long established flight club and a helicopter base for coastguard search and rescue. AVGAS is available. It’s a short walk to the beach and the local village.

Sligo town itself isn’t much to shout about, so we spent little time there and stayed at a B&B on the north shore. We walked around Mullaghmore, drove the popular Gleniff Horseshoe Drive, stopped to admire the Glencar waterfall and ate out at Harrison’s, featured on the Wild Atlantic Way. The few remaining COVID restrictions didn’t really affect us much – masks when inside public areas, showing vaccination certificates to eat indoors, but nothing required outside. We felt a couple of days was enough to see the main attractions, but you could easily spend longer here.