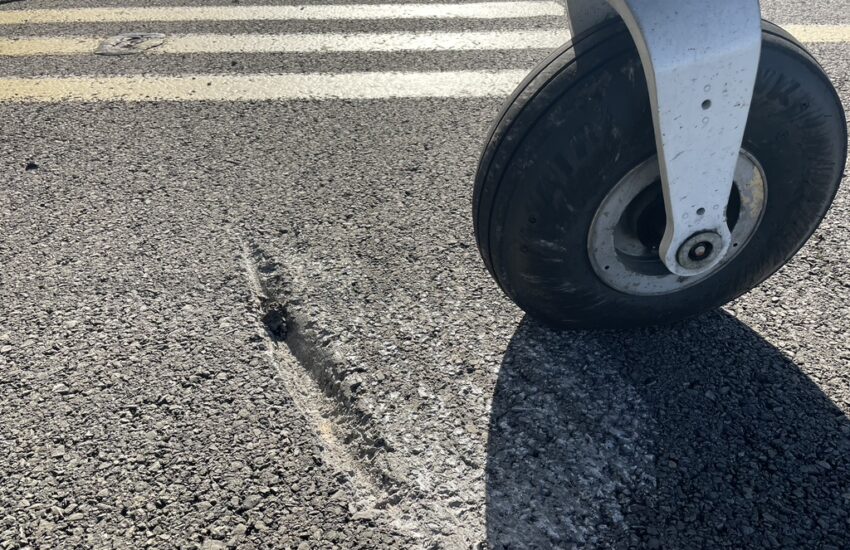 Today was my first and hopefully last report to the Air Accident Investigation Branch (AAIB).

I was instructing at the Bristol Aero Club at Gloucester and taxied out for power checks for the third instructional flight of the day. While parked at the A2 hold, commencing power checks, a large EC135 helicopter hover taxied close behind us from Spot 5 towards the fuel pumps, tipping the aircraft significantly forward and to the right. The damage to the right wingtip which hit the grass was fairly minor, but the propellor crunching through the tarmac in front was pretty serious. I pulled back the throttle and mixture levers immediately, but it was too late to prevent the prop twisting into a curly shape. Thankfully no injuries.

I’m not sure if the helicopter pilot was aware of the incident at the time – he would have been looking out for where he was going – and don’t want to suggest who or what to blame. I will await the outcome from the experts who will assess what measures or procedures might be appropriate to avoid a recurrence.

The fire crew towed the wreckage back to the hangar while I tried to remember my Air Law and precisely which reports needed to be made. The club CFI was very helpful (and reassuring), confirming my view that there was nothing different that I could have done to affect the outcome.

I phoned the AAIB 24 hour number. An efficient clerk took all the relevant details and asked me to email through photographs of the incident. She explained that an officer would review the details and decide whether to open a case. When I asked how long that might take (thinking in terms of some aviation organisations, this might be months), she replied that I should have a decision within 24 hours. They clearly don’t mess about here.

The AAIB is based in Farnborough, south west of London, where they have a large hangar to store/analyse wreckage and teams of investigators. It’s easy to get in touch with them

This was not a major incident and there were no injuries, so I wasn’t expecting the GO team to be deployed and instead this could likely be resolved as a desktop paperwork and telephone exercise.

I contacted them again three days later and was called back promptly. They had decided this would be a “report only” incident (presumably because something very similar had happened a few years earlier). The next day I was emailed with the text of their report entry which will be published on their next monthly cycle. This will amount to just three lines at the back of one of their future monthly reports. They sent me the text that will be published.

‘ Pilot was carrying out power checks, when the rotor wash of an EC135 taxiing behind the aircraft caused the left wing to lift and the propeller and right wing tip to strike the ground. ’

The airport will also be submitting a report, and their compliance officer popped into the club to check we were all OK, which was thoughtful.

Club committee and members were informed, and I was quite touched by how many contacted me to share their concerns for our safety.

I submitted a club safety report which was subsequently forwarded to the airport. I also submitted my first MOR (Mandatory Occurrence Report). These are required to be submitted in cases of injury or serious damage to aircraft, among other incidents. Despite being named Mandatory, these can also be submitted voluntarily and are intended to be kept confidential. MORs are all about improving safety rather than apportioning blame or liability. As stated on their website: A safety recommendation shall in no case create a presumption of blame or liability for an accident, serious incident or incident

Readers may not be aware that this system was centralised some years ago with other EU countries to aviationreporting.eu, and it’s still used for UK reports – effectively acting as a repository and mailbox to collect and distribute them. Having not used it before, I was surprised at just how clunky and user unfriendly it is. The engineering behind it is likely very robust and thorough but it seems there has not been very much focus on streamlining and simplifying the input. Two factor security is used when logging in, although you don’t have to register to submit a report.

ECCAIRS2 (European Co-ordination Centre for Accident and Incident Reporting Systems) is managed by EASA and funded by the EU. Submissions start off with selecting which country CAA you want to submit it to, which includes the UK. It would appear that reports are simply forwarded to the appropriate authority. Registration does not seem to add many privileges or benefits apart from being able to view your own submissions and personalise your profile.

You can also submit reports anonymously. Other confidential alternatives include CHIRP and CAA Whistleblower reports.

There are quite a few mandatory dropdown boxes with many different options. I figured out that the Operator was “Private Owner” (even though it was the club). I guessed that “Occ. on ground” meant occurred on the ground. You can upload files to support your report and I tried to upload some .jpeg photos that I’d sent to the AAIB. These were rejected due to file type, but the permitted file types are not stated. I converted them to PDF and that worked OK. I can’t remember exactly how many times I had to select United Kingdom from a drop down menu – it seemed more like about 10 – and it would benefit from the first country entered being set as the default for all subsequent fields.

The application hasn’t quite been fully completed and debugged yet, but don’t let that put you off making reports about any aspect of safety should you think it appropriate. I do know these are read and acted on in due course.

Our aircraft engineers indicated after seeing the photos and confirmed with a visual inspection that there has been serious damage requiring a full engine tear down and inspection (cost £18,000) and a replacement propellor, testing of the engine frame plus some repairs to the wing rib. Even if insurance pays for that, these inspections usually find something else that needs attention and the club will likely have to fund some of the work. A replacement engine may even be the result.

The incident highlights just how powerful helicopter downwash and wake turbulence can be, and how little control you might have should it affect you. Fortunately such incidents are rare and as with this case, don’t involve injury.

I might have said that this was my shortest flight ever, but in truth we never got fully airborne because even if all three wheels had lifted off the ground at any one time, we were still grounded by the right wingtip.

However, I could have logged 10 minutes or so flight time because we did taxi from parking with the intention of getting airborne, but it would seem churlish to do so.

[Update: I’m pleased to say my student wasn’t put off by this experience and subsequently passed his IR(R) skill test the following month.]