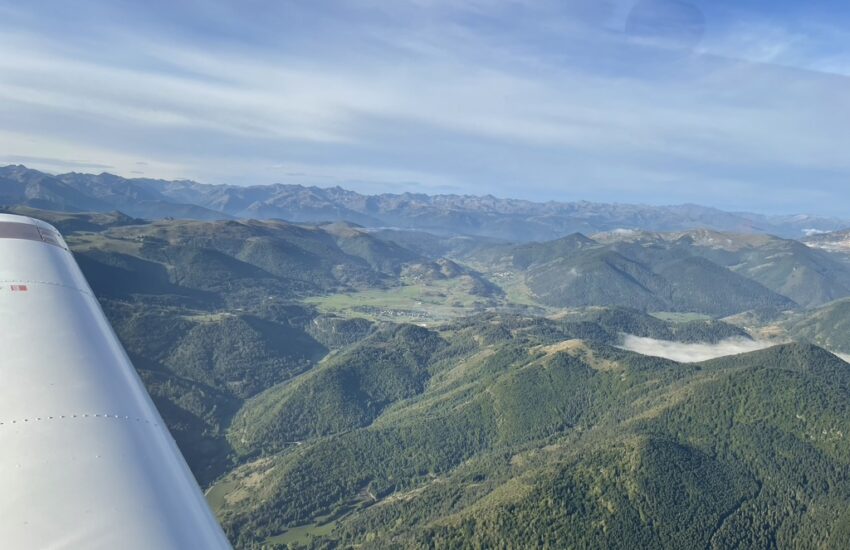 Our last of the four days would be a busy one. We had planned to depart France from Limoges, taking about three hours to fly back to the UK direct in G-CORB, our shared TB20 aircraft. French Immigration/Customs has a permanent presence there and so only requires two hours notice. I also filed an IFR flight plan and GAR form for 1500 local which would get us back to the UK around 1700 UK time (gaining an hour due to timezone difference). We both took our Lateral Flow tests the night before and submitted a photo of the result to the vendor’s website (which was quite fiddly to do), receiving (automated) immediate formal confirmation by return. These are remarkably similar to the free NHS ones (which can’t be used) [and not required for travel to the UK after October 4 2021].

Individual Personal Locator Forms are also required which must include the registration number of a Day 2 PCR test kit previously purchased. You can buy these online when abroad, receiving the registration number immediately by email for use with the form while the kit itself is subsequently delivered to your home. Nic lives in Wales so had to buy his through the Welsh Government and these are delivered just before your return, whereas mine had arrived the day after I ordered it. You also need other random bits of information such as your NHS number which not everybody might have to hand (It’s easily found within the NHS App if you have that on your phone).

This gave us time to visit one other airport in the morning between Perpignan and Limoges which would otherwise be about an hour’s direct flight. I suggested Tarbes because that was the birthplace of our TB20, some thirty years earlier. I didn’t expect to see much there – TB20 production ceased around 2000 – but the DAHER facility there continues to build the TBM range (supposedly shorthand for Tarbes Built Mooneys) – advanced aircraft which cost several million dollars each.

We agreed I would fly the first and last legs of the day to balance up the hours flown overall during the trip.

A fairly early start got us to the airport about 8:30. Although I had paid the landing fee via the MyDz website, we did have to ask at the information desk for the gate code but happily avoided the need for any handling or security checks. It was useful that we had refuelled the previous day on arrival because the fuel was notified as unavailable.

Since this was just an ordinary French flight, I simply called up the tower for a VFR departure and was instructed to taxi to the hold for runway 33 (the larger/longer one). The GA apron effectively sits between the two runways (31 and 33) with a taxiway running south between them. I was asked for my choice of departure points, requested Whisky (as per the Visual approach charts and also marked on SkyDemon), and was cleared for take-off with a 2,000 feet altitude restriction. Traffic was called out to us and when clear we were transferred to approach.

The Pyrenees mountains that border France and Spain have meant little to me before. It takes a physical visit to appreciate that these are quite significant – up to 10,000 feet in places – and they passed quite close on our left as we tracked west towards Tarbes. There wasn’t much activity on the radio and it was a fairly peaceful flight.

Tarbes has two airports, the 825m grass Tarbes Laloubere and the 3,000 metre Tarbes Lourdes Pyrenees which we landed at. Just before switching to tower, we were asked to orbit a couple of times while a TBM returned to land due to a technical issue. Thereafter the tower cleared us to join left base and directed us into the GA parking area.

There’s a very nice plush business aviation terminal and TOTAL fuel station with plenty of parking space. As we were tidying up, two gendarmes walked out to meet us and ramp checked us. They spoke English. Fortunately all our documents were in order – it really helps having a folder handy with everything required. They asked us for permission before taking some photos of our licences and medicals. It was all handled pleasantly, efficiently and amicably. The business terminal was closed so we exited by a one-way gate on the left. A sign explained how to get back in.

My geography of France is pretty poor and I really had not realised that Tarbes was anywhere near Lourdes. The taxi driver at the main terminal explained it would be the same price and time to go to either city, so we chose Lourdes – about 20 minutes away – for lunch. The city is a popular pilgrimage destination for Catholics worldwide, increasing the justification for a large regional airport. Bernadette, a 14 year-old peasant girl, saw a vision of the Holy Virgin multiple times at this spot in 1858. Pilgrims drink the spring water which is reputed to have healing powers.

We walked around the main cathedral building, noting the many shops offering tourist trinkets of variable quality. You could pay over €1,000 for a statuette figurine if you wanted.

Our taxi driver was waiting patiently for us at 1:30 as agreed and whisked us back to the airport. He commented that the city had been very quiet and normally is really busy until end October when the stream of visitors dries up. The main terminal building was modern and clearly had plenty of spare capacity. There were only a couple of commercial flights that day.

The Business Aviation Terminal building at Tarbes was manned when we returned – another crew had called for assistance. A member of the operations staff took our details to send an invoice for the landing fee and opened the door to walk out to the apron without delay. It was then a simple case of calling for taxi, conducting power checks at N7 (just beyond the single taxiway into the GA apron) and backtracking to Bravo before departure to the north.

Nic flew a very typical VFR flight at around 3,000 feet giving us more detailed view of the landscape although slightly bumpier than if higher up. A nice trade-off that mixed the flights today. We briefly transited some Class D around Bergerac while the Danger Areas en-route were cold – the French FIS service was very easy to use, friendly and efficient throughout.

My turn for the last flight of the trip. I had filed IFR, lodged a GAR form and our Personal Locator Forms. Although we had made Limoges a simple technical stop for fuel and to clear customs, we were running about half an hour late. I used the Telegram App to delay our flight plan by 30 minutes which worked out pretty accurately.

We refuelled (using our BP card) then walked out the pedestrian exit gate, straight back into the main terminal building. The information desk explained we would need to pass through security and passport/customs before then paying our landing fee airside. This we did and the landing fee was around €5, the lowest of the trip. There seems to be a continuous presence of Douane staff onsite, which meant that our delayed departure time didn’t cause any issue – this might have been a bigger problem at a more remote airport (such as Auxerre) where staff are deployed specifically to meet you. Our passports were stamped again after our entry stamps had been checked.

The flight plan was immediately simplified, removing the BALAN2W SID on departure with a direct to BALAN and climb to FL100. Subsequently routings were further shortcuts to waypoints several steps ahead on my flight plan, first to GINON, SABLE, DIKRO. I spoke with Nantes then Rennes (on two separate frequencies).

As we approached DIKRO (just east of Cherbourg), Rennes advised that London required me to route via ORTAC, which I suspect was to avoid the Danger Areas directly ahead mid channel. London Control routed me ORTAC, SAM, NORRY then passed me over to Solent Radar who updated that to SAM TABEN. North of Southampton, London Control vectored me around towards the south and west of Compton (CPT), keeping me high at FL100 while vectoring me towards Gloucester. I asked for an early descent but that was deferred until around Swindon, requiring a fairly enthusiastic 1000fpm descent rate to get down in time for Gloucester. With the CAVOK weather conditions, I opted for a direct VFR arrival and was given a left base join for 27 which just about worked out OK.

I would have preferred to have been able to start the descent a little earlier, and might have needed a little more time were an instrument approach required.

The alternative might have been to cancel IFR around ORTAC and route VFR directly north over Bournemouth which would have cut perhaps 10 minutes off the journey. I wasn’t aware of the status of the various Danger Areas in that region so without asking London Information (possibly on box two by my crew), it might have been more awkward. It may also have been possible to cancel IFR once north of Southampton and I may also consider that in similar weather conditions in the future. There is an advantage of remaining in controlled airspace, which is generally safer and easier although you are constrained by what controllers need you to do. Weather plays a significant factor in that choice, particularly if IMC or if above the freezing level.

There were no Border Force awaiting our arrival this time. We refuelled, returned the aircraft to the hanger, cleaned and tidied up. Nic hadn’t felt particularly well on the return flight – probably eaten something that disagreed with him – and I drove him home. This is where it’s helpful to have two pilots in case one becomes unfit to fly.

The next day I took the Day 2 PCR test (you can take it anytime from arrival until the end of second day afterwards) and posted it in the drop box at a motorway service station on the way to work. Clearly they get a lot of rubbish deposited too, including quite a few cigarette ends.

The pre-departure test to return to the UK was not checked by anyone, although if I had been met on arrival and was unable to show it, a spot fine of £500 would apply. This test is being discontinued from October 4th.

The Day 2 test was required to be bought and registered on the Personal Locator Form even if I wasn’t staying in the UK for more than 2 days. The test result is logged in the system and I had to provide personal details including my NHS number, passport, home address, phone number etc in case it proved positive. The Day 2 test will be reduced to a cheaper Lateral Flow test from October 24th.

This four day trip far exceeded my expectations – the weather was much better than we might expect in late September and we were able to venture much further and explore a wider range of destinations/airports/terrain than I had imagined. G-CORB performed well throughout with no issues.