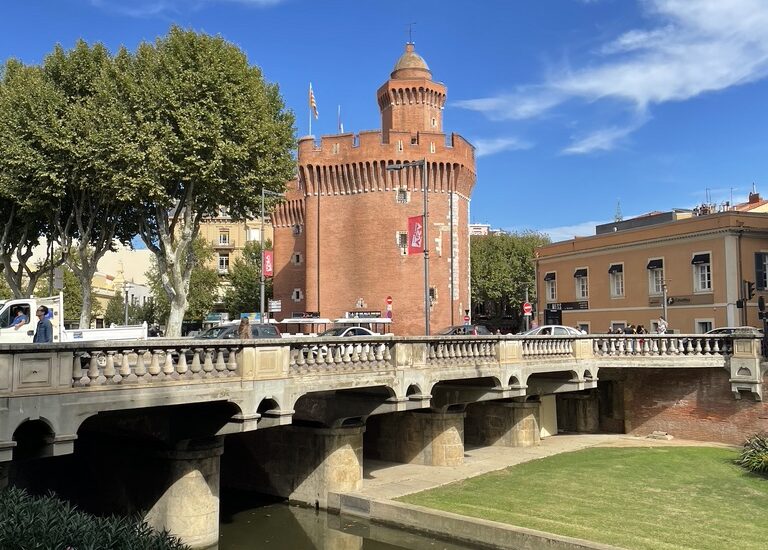 My turn to fly the TB20, this time Figari to Perpignan. The direct route over water was almost two hours and I considered whether to file VFR or IFR and what altitude to cross the water at. There are prescribed VFR routes which reduce the overwater time but take you up north towards Nice and Saint Tropez. A more direct route was suggested by Autorouter with VFR legs at both start and end, and this was what I filed.

Dropping off the hire car was quite easy (I’d strongly recommend Europcar at this airport). Having paid for one day’s hire, they were completely flexible about what time we brought it back. At the business terminal, office staff took our details and said they would send an invoice for the landing fee subsequently. We had to show our pilot licences to security before being let back out to the GA apron, but there was none of the body scanning found at larger airports because we didn’t go anywhere near the commercial terminal or apron.

We checked the gear hydraulic fluid because the gear actuators need an overhaul soon and have been seeping a small amount of fluid, but this remained fully topped up. Cleaned the windscreen – there are definitely many more insects this far south than in England, then donned lifejackets and pulled the aircraft out onto the tarmac. There was no other traffic to affect us, so I took off from runway 04 into a climbing right downwind circuit then crossed to the west and followed the coast. Ajaccio asked us whether we wanted low level or to climb higher for deconfliction, so I climbed up to FL50 as instructed for the transit.

The main danger area over the sea to the west was active, so we were routed back up to Saint Tropez pretty much the same way that we came in – the IFR vs VFR filing really made no difference. Thereafter Nice turned us west, keeping us north of Toulon and yet more danger areas and passed us across to Provence Information. Again asked our intentions, we could have chosen to route more overland but I decided to fly more directly across the sea.

We descended just below Perpignan TMA where the AIP advises that you arrive at the zone entry point at 1,000 feet. There are two almost parallel runways, the much larger 33 is used by the airliners and the shorter 31 by GA. The tower instructed us to join right base for 33, then asked if we required fuel. When we answered yes, we were switched to runway 31 which was pretty straightforward. After landing, we backtracked and taxied to the fuel station which accepted our TOTAL card. Thereafter, we taxied beyond the tower to the GA parking area which was mostly covered in tumbleweed.

There is an exit gate with a sign on it directing you to pay your landing fees via a website (MyDz.fr). This should also issue the gate code to allow you to return – easy and efficient, avoiding the need to go through security or pay the fees in person. Sadly this didn’t work properly for us – it did take payment but didn’t issue the gate code, so involved a trip to the information desk.

We arranged for a taxi to drive us into town and booked into a hotel online while we waited.

Perpignan is conveniently located for many tourist activities in the area, beaches, marinas, resorts but the city itself is not particularly noteworthy. A small river runs through the centre which has been made the most of, expanded into a pedestrian avenue. Perpignan Castle sits astride the river in a central location. We didn’t venture out of the city or see anything of the area nearby.

The steak and frites for dinner was very welcome.

We had a busy day ahead of us, returning to the UK with a couple of interesting intermediate stops. We took our pre-departure covid lateral flow tests and submitted the results, filling in the paperwork including filing flight plans.