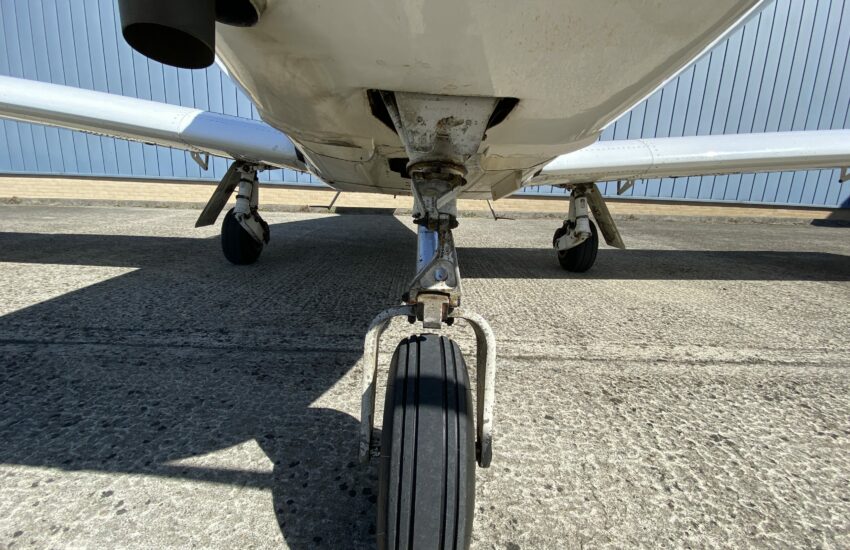 I’ve encountered relatively few problems in my shared TB20 over the eight years since I bought a share, even the minor problem with I had with the gear a few years ago was quickly resolved. We had lost use of the aircraft since November when it went in for its Annual and had the gear actuators overhauled as planned – quite an expensive operation. I flew it back to base at the end of January, carefully monitoring everything and apart from some dripping condensation inside it all worked well. The battery charge had dropped down, so I left it on charge for a time in the hangar. The battery compartment sits below the baggage floor with a flap secured by four screws.

Since then, there had been a couple of flights by my co-owners, and while we had some minor concerns about the fluid/gas levels in the shock absorbers, our engineers considered it fit to fly.

So on this nice sunny day, I had planned to share a flight with co-owner John to Caernarfon, meeting a friend there and allowing us both to regain some currency on the aircraft.

All went to plan until shortly after take-off when I raised the gear but fairly quickly noticed the absence of the speed increase that normally accompanies it. Sure enough, the three green gear down lights remained on. This hadn’t happened on any of the recent flights. The gear switch did appear to be loose, so John tightened up the fitting but operating it still made no change. The circuit breakers were all as normal (if one had popped it could prevent it operation).

I called ATC for rejoin, briefly explained our situation and asked for a low approach and go-around so the tower could double-check that the gear was in fact still down. We were quickly given a downwind join and flew the circuit, initially not below 400 feet (there are works in progress on the adjacent runway) and subsequently to land.

In these situations, I have found ATC to be very calm with clear instructions and few straightforward questions. Although I did not declare an emergency, it was reassuring to see the red fire truck at the far end of the runway just in case. This all takes the pressure off and helps concentrate on flying the aircraft.

After encouraging my student pilots to improve their landings, I was slightly disappointed not to make this one a greaser – the base turn was a little early resulting in being a little high on final and I did not flare so well, but we made it down safely.

Our friendly engineers onsite took a quick look after landing and it was determined that the oleo’s weren’t correctly pressurised with the right amount of fluid versus nitrogen gas. This caused them not to spring out fully after take-off, so the “weight on ground” switch continued to operate and inhibit gear retraction. Subsequently, re-pressurising them resolved the issue and I flew three circuits a few days later to confirm all was working as it should.