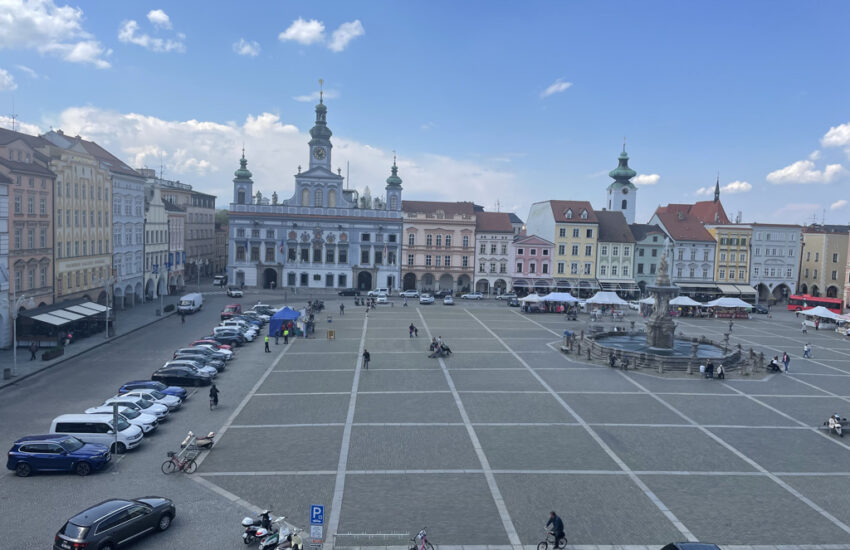 Draw a straight line from Gloucester to Vienna and you will find it passes over the southern tip of the Czech Republic. It was about an hour’s VFR flight today south west from Bamburg towards Vienna, landing at Ceske Budejovice – the regional capital of South Bohemia, about 75 miles south of Prague and most famous for its Budweiser Budvar brewery.

My original plan was for an early afternoon departure from Bamberg, but Windy’s thunderstorm forecast had different ideas.

Weekday arrivals and departures from Bamburg require that a radio operator be in attendance. My online PPR request made a week earlier had been approved on Saturday with contact details for the staff allocated. When I changed my plans for departure early Monday evening, I was pleased to receive a prompt reply confirming the change.

There was no other activity and we had the airfield to ourselves. It took about 45 minutes to pre-flight, refuel, pay and depart – exactly on time as planned. I enquired about the IFR approaches and why they were unavailable to private pilots. The airfield is very much more a “Sonderplatz” – recreational airfield – rather than a public passenger airport, and does have some noise abatement measures although these are not stated in the AIP. The approaches are rarely used only by the local commercial operator, perhaps only 10 times per year when the weather demands it. No training or currency approaches are permitted.

I had filed a VFR flightplan through SkyDemon. No other paperwork was required for this flight although I had emailed Budejovice both to find out their fuel price and let them know to expect us. No passports, police checks or COVID health checks – just file and fly. I selected Straubing as my alternate because it has instrument approaches and I thought a diversion most likely to happen if weather over the mountains prevented me crossing the border.

We took off from runway 03 with a right turn – there are some electricity pylons worth keeping an eye out for if you are heading in any other direction. After departure, I spoke to Langen Information who proactively offered to open my flight plan – presumably it pops up on their screen on first contact. The Flight Information service here just seems so much more “joined up” than in the UK. The Bamberg radio operator had also said he would telephone to open it but I don’t know who got there first.

It really was a fairly uneventful flight, with Langen prompting me to call Prague Information at the border. Neither frequency was busy. Langen reminded me of the active danger area to the south. Prague also alerted me to one. The border appears to be drawn along a ridgeline of hills after which the terrain seemed a little more wrinkled, but nothing looked radically different down below. I recall being told to squawk 2000, the standard code used when crossing international boundaries before making contact with the next country. It seemed unusual to me, since this is the code also used for IFR outside controlled airspace in the UK, but is the ICAO recommendation.

About 15 miles before reaching Budejovice, I gave them a call. Although physically rebuilt as a large regional airport, it was very much a radio service – just passing information about the runway, QNH and that there was no other traffic. This made a straight in approach relatively easy, although there is a large hill to avoid on long final for 09.

The airfield elevation is 1,411ft so quite a bit higher than I am used to.

A marshaller was ready to guide us to park on the main apron, which was otherwise deserted.

It seemed quite strange to land at what appears in all other respects to be a fully equipped regional airport. They are fully prepared and very keen to attract commercial flights which should open up the region for tourism. Their instrument approach awaits approval but I wonder how significant that terrain on long final for 09 affects it.

The staff could not have been more helpful and friendly, with good English spoken. A fuel truck came on request, then we waited in the VIP lounge/briefing room for our taxi. The airport check-in area has been sequestered as a registration centre for Ukranian refugees, something we expect to see more evidence of as we travel further east.

The taxi into town cost 10 euros. We stayed on the main square in a deluxe hotel at a price similar to the more basic choice of our previous night in Bamberg. Cash is more commonly used here, with Euros widely accepted with change given in Koruna.

We took our time to wander around the city and enjoy the views. We climbed the 225 steps of the tower to capture outstanding views of the city and surroundings. The architecture in the old town resembled Bamberg to some extent, with many buildings having been restored and kept in good condition. Further out, there are many more concrete residential tower blocks. English is widely understood, especially by younger people.

The weather forecast proved correct, with the sunshine giving way to noisy thunderstorms by late afternoon, then clearing by early evening. It seems a fairly quiet city, with only the sound of church clock chimes and a central fountain in the background late afternoon.

Dinner definitely involved beer. The city is famous as the original brewery of Budvar, before the Budwieser name was adopted by Anheuser-Busch for marketing in the US. We enjoyed some Pilsner Urquell which comes with a larger head than we are used to back home. Prices are much lower and the quality of the meat was very good.