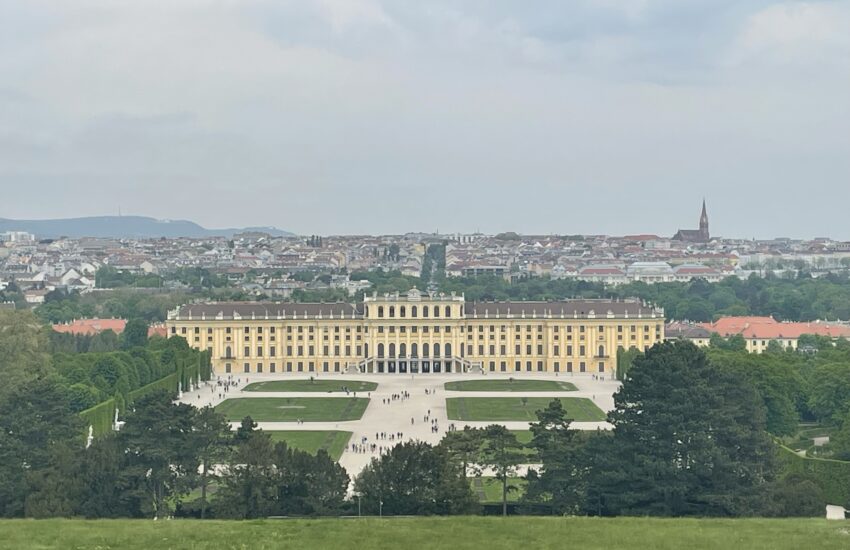 Next stop is Vienna where we planned to visit and stay with friends for a few days.

Landing at Vienna’s main airport is possible but expensive. There are several GA airfields in the vicinity, especially Voslau (LOAV) and Wiener Neustadt Ost (LOAN) which seemed most appropriate. LOAN is the home of Diamond Aircraft and might well be worth a visit, but LOAV was closer to where our friends lived.

Since Austria is in Schengen, no passport or customs should be involved, we just needed a flightplan. However, Voslau’s airport website and a specific NOTAM mandate all international arrivals to submit a special form to comply with COVID regulations. It also required completion of the national online Passenger Location Form.

The information appears to be out of date but my email questioning this went unanswered. I tried to fill in the PLF, but since we are both fully vaccinated it didn’t let me complete that process. I completed the arrival form and emailed the airport in good time and they passed it on to the local authority. It’s strange because no other Austrian airport (large or small) seems to have this requirement, and the Austrian government website clearly states that nothing is required from fully vaccinated visitors. Since our visit, all pre-clearance and testing restrictions have been withdrawn nationally so that even non-vaccinated tourists are free to come and go. Although the NOTAM has now been withdrawn, the requirement for one hour’s notice for intra-Schengen movements remains on the airport website.

The briefing chart for the VFR circuit pattern itself is fairly daunting, clearly defining the acceptable inbound routes which then avoid multiple noise abatement areas. There is a detailed chart on the airfield website, but I felt the written guidance was poor. For example: “All published reporting points are compulsory reporting points for VFR flights. The reporting points A and B are compulsory reporting points for arriving VFR flights only“. After some thought, I think it means you don’t have to report you’ve just taken off. AOPA Austria has published a set of pre-recorded videos (with English subtitles) that helps visualise these circuit patterns, but I felt neither sufficiently explained what to expect.

I also looked at the IFR instrument approaches at the airport. There is an extremely detailed (44 page) briefing document which pilots are required to have with them should they use it. The minima is relatively high (880 feet AGL) and it’s described as a cloudbreak rather than an approach – permitting the very few qualified EIR rated pilots to use it in addition to full IR holders. One gotcha is that aircraft must be equipped with two 8.33kHz radios because you need to monitor one frequency while talking on another. Although our second COM box is 25kHz only, our COM1 Garmin GTN can monitor the standby frequency if required and automatically mutes that when anyone is talking on the primary frequency. There are other quite strange quirks to this briefing, such as the requirement to go around for one type of flight plan even if you are already visual with the airfield if you have not been officially released by approach. There’s no guarantee you will be immediately accepted on departure and may have to hold at 3,000 pending other traffic.

A further 28 slide briefing is required before using the self-service credit card operated fuel pumps. It basically warns you not to blow yourself up with a spark.

Further practical concerns include high terrain close by to the west and the possibility of thunderstorms.

Notwithstanding, this was to be a relatively short direct flight of about one hour VFR.

Arriving by taxi at Ceske Budejovice airport, the security staff outside were actively awaiting us and as soon as we exited the taxi, we were swiftly and efficiently escorted into the GA office. Our invoice was ready to settle and we walked out to the aircraft with no other security check or formalities. There was one other aircraft on the ground – a Cirrus had dropped in for fuel and departed before us.

Our VFR departure was very straightforward. The tower opened our flight plan and we were quickly in contact with Prague Information which seemed very quiet. VFR flight conditions were good, with a definite gap in the clouds as we passed across into Austria. The ground below definitely looked different south of the border – more lush light green grass, more clearly demarcated field boundaries. Wien Information provided a flight information service, and it wasn’t long before we were calling inbound to Voslau.

This is where the fun started. The circuit altitude is 2,500 feet with multiple mandatory reporting points. My mistake when self-briefing was focussing too much on the lateral track and too little on the vertical profile. 2,500 ft circuit altitude might not strike you as too high for an alpine country like Austria, but when you note that the field elevation is 887 ft, that translates to 1613 ft AGL. That’s higher that the C17s use back at Brize Norton! What’s more is that for runway 13, the top of descent isn’t the end of downwind as is normal elsewhere, but on turning final at point W. It appears that every approach is a glide approach.

I flew inbound from point Uniform because someone else was arriving at Tango and reported as such. I was already a bit high – the high terrain is a little off-putting to the west – and even with an enthusiastic descent profile (idle power, full flap and side-slip) I still wasn’t going to (safely) make it down in time. The aircraft ahead went around, and it was only then that I realised that pilots can choose between the right or left hand circuit to do so. The C pattern at 1,500ft is only 700ft height and quite tight for a newcomer, so I chose to follow a Diamond DA40 turning right into the D pattern which I was visual with and also had onscreen via SkyEcho/SkyDemon. This helped me trace out the circuit profile, but I was still surprised by the high circuit height and late/delayed descent. This time we did make it down in good time, and when reporting on short final I heard the magic words “land at your own discretion”.

We parked up on the hard apron and had a pleasant wait in the airfield restaurant for our friend to collect us.

Public transport in the area is frequent, of a high standard and excellent value for money. We downloaded a two-day pass for €14 each but never had to show it or use it to open a barrier. It included overground trains, underground lines and buses. We spent two full days exploring the city which had been the seat of the Hapsburg Dynasty and the centre of the Holy Roman Empire.

The city centre has many impressive buildings, parliament, exhibitions, churches and more.

I even found Cafe KORB which justified a coffee and Apfel Strudel stop – surely just too much of a co-incidence with my aircraft registration.

On the city outskirts, Schonbrunn palace was glorious, with an extensive internal exhibition of the rooms well laid out.