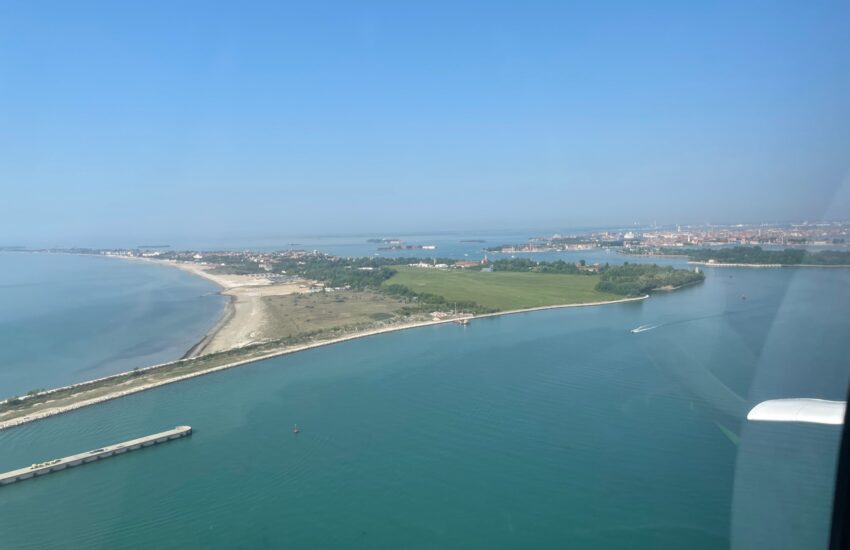 Definitely the highlight of my trip and one for every pilot’s bucket list. Today we flew south west VFR from Ljubljana over the mountains then down the Adriatic coast with great views of Trieste and the Venice lagoon to land on the grass strip at Venice Lido beach. This was the first commercial Italian airport, opening in 1926, and is named Giovanni Nicelli airport in honour of an Italian air force ace. The art deco building has been fully restored with sumptuous furnishings and art inside. It has immigration facilities for direct arrivals from outside Schengen, fuel and a restaurant, but during our visit there was very little traffic and no PPR.

We got up fairly early and enjoyed exploring Ljubljana in the morning, visiting the castle on the hilltop which has been thoroughly restored and revamped into a tourist attraction. We took the funicular lift up and walked down. The market was open, even on a Sunday and we bought some souvenirs including intricate woodcraft and locally produced honey. Lunch on the riverside was livened up by the international Wings for Life world run raising funds for spinal cord research – the city was one of several hosting simultaneous runs open to all entrants of any standard, from wheelchair to professional athletes.

We took the town bus to the airport which cost just 1 euro each, taking about 45 minutes and stopping at a few villages en-route. At the VIP entrance, we were taken through security and driven to the admin office to pay the bill. I’ve paid more for far less service at smaller regional UK airports. The dispatcher noted that several airliners had not landed and turned back, including one Lufthansa Airbus from Munich. There were reported thunderstorms to the north, wind was from the east so the runway in use didn’t have a direct instrument approach – the procedure required a circle to land. We did see one airliner land on 30 – presumably the tailwind was within limits – but a quick look out the window plus double check of weather forecasts on the iPad confirmed that we would be OK. I made a quick call to the tower to check that they had my VFR flight plan, and that it wouldn’t be any problem to depart early, and what to expect.

A minibus took us back to our aircraft and left us to get on with it.

My departure was from Golf, close by the GA parking, where I made my power checks. Other large airports might have wanted me to do those before taxi, but with so little traffic around I wasn’t in anyone’s way. The tower instructed me to turn right, reporting at S3 at 2,500 feet, squawk 7001. Just before we got there, I was handed over to Ljubljana Info (a different frequency from that used when inbound IFR). I was cleared to 5,500 which gave me adequate clearance from the mountains below and then given a direct to PZS3. This is where I made a mistake and thought I should fly first to S1 then onwards. There is always room for confusion because VFR flight plans contain many Lat/Long co-ordinates which mean little to controllers. However, this was quickly resolved and I flew pretty much a direct track to LIPV from that point on.

The handover to Padua was straightforward, with clearance through their airspace quickly issued. I asked for a descent to 4,500 which was again fairly quickly granted. In a relatively short space of time, the mountain scenery fell away and the adriatic coastline opened up in front of us, with Trieste off to the right and later the Venice lagoon ahead. A further descent on request to 2,500 then I asked to switch to Venice Lido and was cleared to descend to leave controlled airspace at my discretion. Venice Lido radio informed me that runway 05 was in use, and asked me to make some position reports. It was a glorious sight and really quite straightforward downwind circuit join to land on the grass with a 10 knot headwind. The surface is good, dry and short. I taxied back and parked alongside a couple of other aircraft before we walked through into the main building and signed in. The staff there really aren’t bothered about exactly when you are coming or going – just pay your bill before departure and set your own timetable – it felt so relaxed and straightforward compared to many other airfields.

Watch the short video at the bottom of the page to get a better feel of what it’s like.

I’d selected a beachfront hotel just a short walk from the airport, and we enjoyed the brief stroll. Checking in seemed to take forever – our room wasn’t ready even at 5pm in the afternoon – but it was worth the wait. The Lido isn’t very big, only a few hundred metres across and around 7 miles (11km) long, mostly beach but with a few streets (and cars) at the northern end, supporting 20,000 inhabitants. Regular ferries and water taxis can whisk you across to the centre of the city. Since we had visited Venice many years before, we weren’t bothered about returning – it was enough to see St Mark’s square in the distance at sunset. After some beach time, we enjoyed some fresh and healthy Italian food sitting at an outside restaurant table.